The 1-4 matchup in the Western Conference semifinals will continue on Tuesday from the NBA Bubble in Orlando, Florida and the winner of Game 3 will have earned either the L.A. Lakers or Houston Rockets a 2-1 series lead. 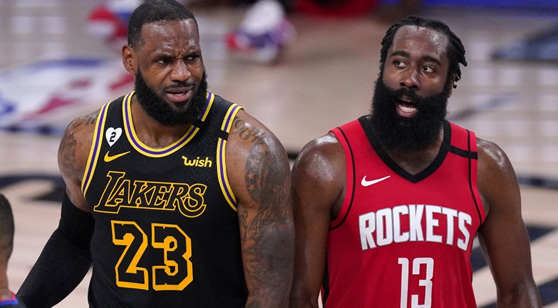 The Lakers and Rockets are knotted at 1-1 after their first two games and both margins of victory came by double digits. (AP)

After winning and covering in their Game 2 contest to even up the series 1-1 SU and ATS, the Los Angles Lakers head into the third game of this series as five-point favorites with the public slightly leaning towards a Houston bounce-back effort on Tuesday night.

Similarly to the Lakers, the ‘under’ evened up the series with the ‘over’ on Sunday night (1-1) as Houston and Los Angeles combined for 226 points, pushing the total for the game over the line of OU 223 by just three points. The ‘over-under’ for Game 3 is set at OU 225.5 with early action coming in on the ‘over.’

James Harden and the Rockets are no strangers to cashing underdog-money line tickets like the +240 slips they cashed in their Game 1 victory this past Friday. Houston is +216 on the money line to take a 2-1 series lead over the top-seed in the West.

No disrespect to Mike D’Antoni and his team’s center-less methodology, but the 34-point scoring spectacle displayed by Anthony Davis on Monday night should be a gameday tradition when LA and Houston meet up, because there literally isn’t a body on the floor for the Rockets capable of containing the All-Star big man and it finally showed in Game 2.

Russell Westbrook, on the other hand, was hard to watch in the second game of this matchup, as he attempted three more FGA than Harden (50%) in the contest, while barely shooting 25% from the field. Houston had been good against the Lakers this year prior to this series (2-1 SU), but mainly because of Westbrook’s explosive scoring and versatility (regular season vs HOU – 38.5 ppg.).

The Rockets scored 72 points in the second and third quarters of Game 1. I am sure they will aim to have more stanzas like that in Game 3 as Houston moves forward in this series lacking zero-confidence.

The Lakers jumped out to an early lead and it appeared that bettors on L.A. were going to coast to an easy wire-to-wire victory in Game 2.

Sure enough, Houston outscored Los Angeles 41-23 in the third quarter and that effort made L.A. bettors sweat.

While the Rockets couldn't miss in the third, the fourth quarter was a different story as they were held to 17 points. Despite that outcome, the 'over' for the game still managed to sneak in.

Lakers vs. Rockets
How to Handicap Game 3

It was great to see LeBron look like himself again in Game 2, as King James was very close to posting an enormous triple-double in the Lakers win on Sunday, recording 28 points, 11 rebounds, and 9 assists for the Lakers.

But the spotlight managed to fall on AD again as the former-Pelican big man continues to draw the biggest height advantage he has received in matchup all year, standing five inches over the much shorter PJ Tucker.

Davis shot over 60% from the field for his second straight contest and I expect him to hit a similar clip for the remaining games in this series. Frank Vogel just needs to get him the rock more, because the 16 FGA he had in Game 1, simply isn’t enough to keep pace with the explosiveness of Houston.

Look for the Lakers to play through AD for the rest of this series and ride with his total points ‘overs’ until the Rockets find an answer on defense for him.

Props to Houston for orchestrating a unique strategy to potentially pave its way to the NBA Finals through the star-packed Western Conference. And the club is doing so despite lacking the talent-level of teams like the Lakers and Clippers, and really sticking to it no matter the circumstances.

The Rockets looked like they were untouchable in the third quarter of Game 1 and were eyeing a 2-0 series lead after outscoring the Lakers 42-23 in the period, but then just completely ran out of the steam as Houston scored just 17 points fourth quarter on 2 of 12 from 3-point range.

Chef Harden and the rest of his guys are going to continue to put up 3-pointers at an incredible rate for the rest of this series because that is what they were designed to do. All LAL can do on defense is just put a hand up and hope they miss.

Surprised to see LeBron and Davis listed on the Lakers’ injury report with a finger/groin issues and not sore backs after carrying LA to its first victory in the Western Conference Semi’s on Sunday. Neither of the superstar’s injuries are considered serious enough to put their status for Game 2 in jeopardy.

Westbrook probably played the worst game he potentially could have in the Rockets Game 2 loss to the Lakers on Monday by going 4 of 15 from the field while taking more shot attempts than his counterpart, Harden, who had 25+ points on 50% shooting from all areas of the floor like he tends to do on a nightly basis.

Even with the extremely poor play of Russ, the Rockets still found themselves in the thick of the game down the stretch of Game 2; even looking like they were going to win it at times.

I am going to roll with Houston +5 here, as I think Westbrook bounces back and has a big Game 3, giving Houston a chance to snag a 2-1 series advantage over the Lakers.