The second round of the NBA Playoffs in the Western Conference will conclude on Tuesday night as the No. 3 Denver Nuggets will meet in a decisive Game 7 matchup against the No. 2 Los Angeles Clippers. 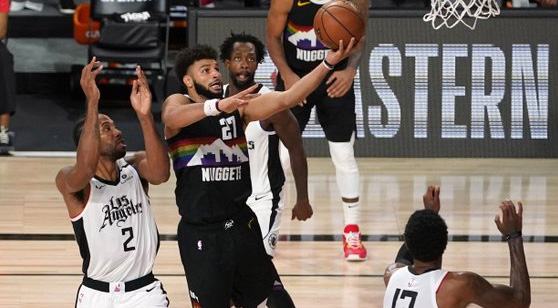 The Nuggets have outscored the Clippers by a combined 47 points in the second-half of the last two games in their 2nd round series. (AP)

The Denver Nuggets, who are no strangers to win-or-go-home contests in the bubble, will head into their third consecutive game facing elimination as seven and a half-point underdogs against the second-seeded Los Angeles Clippers, despite knocking off Doc Rivers’ team in back-to-back matchups prior to Tuesday night.

The ‘over-under’ for Tuesday’s matchup opened around OU 211.5 at most books, but we have seen that number take steep fall down to OU 207.5 as tickets continue to rain in on the ‘under’ – typical for almost any Game 7 affair.

It feels like the Nuggets have been on the ropes since Game 4 of this series, but they just keep on putting on outstanding displays of resiliency time-after-time again.

In Game 6, it was on the shoulders of the Joker, Nikola Jokic (34 points, 14 rebounds, 7 assists), who led his team back from a 16-point halftime deficit to stun the Clippers, 111-98 and force a Game 7 on Sunday afternoon.

Denver scored a modest 64 points in the second half of Game 6, which is the kind of performance they will likely need to compete with LAC in the series finale.

However, the real story was full blown shooting collapse of Kawhi Leonard and Paul George on Sunday, as the all-star duo shot a combined 6-for-21 from the field in the final two stanzas of the Clippers’ loss, contributing heavily to the LAC’s 10-for-38 as a unit.

The Claw says his team just went “cold” down the stretch of Sunday afternoon’s contest – he will hope for him and his team to heat back up again before Tuesday night’s tilt.

Bettors backing the Clippers for the second straight game got another rough taste of reality as L.A. built a big lead before collapsing again.

Nuggets vs. Clippers
How to Handicap Game 2

They say, “The most dangerous lead in sports is a 2-0 lead,” but it is starting to seem like the Nuggets prefer being down 3-1, as Mike Malone’s team has now officially rallied back from its second straight two-game deficit in these playoffs to force another Game 7.

Either that, or they just are very fond of seven-game series, as Tuesday night will mark the fourth straight playoff series for Denver that has extended to its seventh contest.

The first of those four series took place last year and ended with the Nuggets advancing past the seventh-seeded Spurs in an exhausting opening round series to kick off last year’s playoffs, which ultimately led to Jokic and company running out of steam in their second round series finale against the Blazers.

Consecutive seven-game playoff series are known to be physically AND emotionally draining for athletes – especially in an environment like the Disney bubble. Tuesday night should be a great test to see what this young Denver team is really made of.

Clippers fans are being driven up all wall by their team in this series and I cannot blame them, as Los Angeles has been in a position to close out the Nuggets in each of its last two contests and has failed in both.

Now LAC finds itself in a Game 7 matchup, squaring off with Murray and Jokic, who both have the potential to get as hot as anybody in the league and win a basketball game.

The Clippers are the overwhelming favorite to win this series finale and they should be based off their superior talent-level and offensive firepower.

Just ask Donovan Mitchell and the Jazz though – This is just not a spot you prefer to be in if you are Coach Doc Rivers right now trying to establish yourself as a Western Conference powerhouse.

Nothing new to add onto the injury report for Game 7 as Vlatko Cancar and Will Barton remain the only players expected to be absent from either side on Tuesday night – the only thing questionable heading into this series finale is what a three-game implosion would mean moving forward for a Clippers team that was originally supposed to be destined for a blockbuster LA vs LA Western Conference Finals.

The ‘under’ in this series is 5-0-1 with the only game in this matchup failing to cash ‘under tickets’ being Denver’s 111-105 victory over the Clippers in Game 5, which resulted in an OU 216 ‘push’ at most books.

The total for Game 7 has fallen dramatically, but it is still too high as I think the final game of this series ends up looking a lot like the Clippers’ Game 4 victory when they decided to REALLY crank up the defensive intensity held the Nuggets to just 85 points.

Give me ‘under 207.5’ here, as the Clippers knock off the Nuggets relatively easily in Game 7 by playing the suffocating defense on the perimeter that has been absent in their previous two contests.