The NBA Western Conference Finals will tip off on Friday with the No. 3 Denver Nuggets meeting the No. 1 Los Angeles Lakers in Game 1 of their best-of-seven series.

The Rockets appeared to have something special saved up for the Lakers following Houston’s 112-97 win in Game 1 of the Western Conference semifinals against LAL, but that was short lived as LeBron James rallied his guys to four straight victories, securing the first Western Conference Finals berth of 2020.

Denver’s route to the Western Conference Finals was a little more bumpy than the top-seeded Lakers’ path, as The Nuggets have been forced to play six elimination games inside the bubble already and have came away with six gutsy victories in those contests. 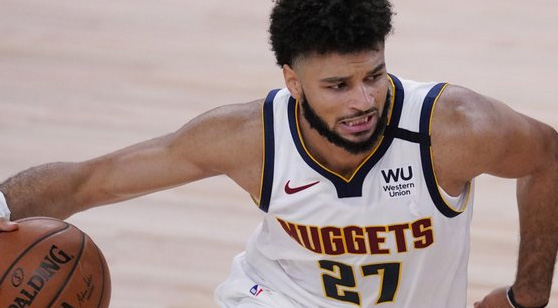 Jamal Murray and the Denver Nuggets have opened as healthy underdogs to the L.A. Lakers in Game 1. (AP)

After up catching on a much needed five days of rest, the Lakers head into their first matchup with Denver as seven-point, despite being 0-2 SU in series openers inside the bubble.

The oddsmakers are not messing around with the ‘over-under’ in this series after watching 20 out of 28 post-season games fall ‘under’ the total inside the bubble so far – setting the line for Friday’s contest at a relatively low bar of OU 212.

The Nuggets are currently listed as ‘+400 underdogs’ to advance to the NBA Finals, but if you are looking to place a wager on Denver in this matchup, you might be better off waiting until the Lakers take a 3-1 lead because that is when Jamal Murray and company seem to do their best work.

Los Angeles held a 3-1 straight up advantage against Denver so far this season, but the Nuggets have covered a hypothetical seven-point spread in three of those contests.

Prior to the NBA shutdown, the Nuggets did a great job defending the high-powered Lakers, holding them to just 106 points per game.

When these teams met up in the bubble though, the game quickly turned into a track meet as Kyle Kuzma went for 25 points on 68% shooting in the LAL’s 124-121 victory.

I believe the best way to get a feel for what kind of game we are going to see on Friday night, is by examining the overtime matchup in Denver between these teams back in February.

Nobody has had an answer for Murray defensively so far in these playoffs and the Lakers certainly did not have one for him back in the regular season when he went for 32 points on 13 for 25 shooting from the field – but it still was not enough to take down LAL, as LeBron teamed up with Anthony Davis and bullied their way to a combined 65 points to seal the victory.

Jokic was good in the contest too, tallying 22 points, 11 rebounds, and 6 assists to complement Murray’s electric outing, but again, it was not nearly enough to get them over the hump against the Lakers’ star-packed lineup.

Aside from Denver’s 128-104 victory back around Christmas-time, these teams have played each other pretty close and I have a feeling Game 1 of this series is going to end up in a similar fashion.

Nuggets vs. Clippers
How to Handicap Game 1

The Nuggets are riding high following their Game 7 victory over the Clippers on Tuesday night, thanks to another insane 40-point outing from Murray (57% FG) to close out the second seed in the West.

It appeared most fans just assumed the Clippers would come out victorious in the series SOMEHOW, but Denver ended up making a mockery of Doc Rivers’ team by the end of the contest – highlighted by the Joker tossing a backwards pass over his head to a cutting Murray, already boasting a 15-point lead in the closing minutes of the fourth quarter.

Jokic and Murray combined for 56 points, 26 rebounds, and 18 assists on 51.3% shooting for the Nuggets in Game 7, and they will get a crack at a LAL team that really struggles to defend the perimeter at times.

If Mike Malone is going to continuously get that type of production from his young stars, there is no doubt the Nuggets could make LeBron and his crew sweat out a few extra games in this series, especially with the shooting cold-spells LA has been experiencing at times inside the bubble..

This matchup is really interesting to me because throughout the course of this year the Lakers have been the kings of “being caught off guard” by teams, and the Nuggets appeared to just lull the Clippers to sleep and completely catch them off guard in their previous series after falling in an 0-2 hole against the other team hailing from Los Angeles.

I am a little worried about something similar happening to Frank Vogel’s team in this series. The hype all year surrounded the two teams from Los Angeles potentially squaring off in the Western Conference Finals against each other, and now that the Clippers have been upset by Denver, it seems a lot of the buzz surrounding this series has faded.

The Lakers will win this series and likely this year’s NBA Finals, but do not be surprised if the Nuggets come out of the gates playing with an unmatchable amount of energy in Game 1 and put the pressure on LAL early.

Dion Waiters would probably hate me for saying this – but nothing significant on the injury report heading into the first game of this series.

It looks like there is a chance Denver could get Vlatko Cancar back before the end of this series, but other than that, minute rotations should look pretty similar to how they have looked in previous series for these teams.

The Lakers have lost both Game 1 playoff series matchups so far inside the bubble (Blazers and Rockets) and are now coming off nearly a whole week of rest following their quick five-game Western Conference Semi’s dance with Houston.

I am riding with the Nuggets +7 here as I think this series opener is a perfect recipe for LA to come out of the gates slow and possibly even drop its third consecutive Game 1 matchup in this year’s postseason. Seven points feels like way too many to open the series.

Regardless of what happens in Game 1, I am picking the Lakers to represent the Western Conference in this year’s NBA Finals. LeBron and AD are both astronomically better players than anyone else remaining inside the bubble and I expect them to assert that at some point over the course of this series.

The Lakers will still likely drop at least one game in this series though, because that is just typically how the cookie crumbles for LeBron-centered teams in the post-season.