Following an insanely clutch game-winning 3-pointer at the buzzer from Anthony Davis to seal the Lakers' sixth straight playoff victory, the Denver Nuggets find themselves in an uncomfortably familiar situation.

Mike Malone’s team will look to begin the process of erasing another two-game series deficit against a Western Conference contender in the bubble on Tuesday night. 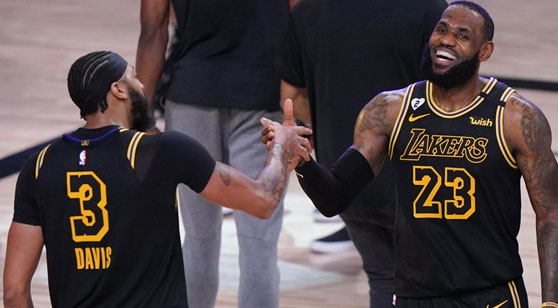 The Lakers edged the Nuggets in Game 2 to take a 2-0 advantage in the Western Conference Finals. (AP)

Despite the Nuggets proving they are able to compete with the Lakers in a playoff environment in Game 2 with their last-second loss, Denver continues to get no love from Vegas heading into the third contest of this series – setting the line at Los Angeles -6 again.

The total, OU 214, has split the first two games of this series 1-1 and appears to be a solid line for this matchup moving forward as the oddsmakers have opted to leave it be for the third post-season contest between these teams.

Denver’s odds to advance to the NBA Finals swung all the way to an insulting line of +2000 following its Game 2 loss on Sunday night, making this the third consecutive playoff series the Nuggets have trailed by at least two games.

The first game of this series was a lopsided one to say the least, as LeBron James’ services were not needed in the fourth quarter of his first ever Western Conference Finals matchup after earning a steep 103-79 lead by the end of the third stanza in Game 1.

Frank Vogel’s team did not rest so easy in the second game of this series. The Nuggets came storming back with vengeance on Sunday night, only to have their dreams crushed by a cold-blooded, game-winning 3-pointer by Davis at the buzzer to seal a 105-103 victory and a 2-0 series lead.

They may not have won the game, but Nikola Jokic and Jamal Murray have proven they can keep up with the best in the league though – combing for 55 of Denver’s 103 points in the loss. They will look to do a little more and send their team over the edge on Tuesday night.

Lakers vs. Nuggets
How to Handicap Game 3

This series was just a few seconds away from being knotted up 1-1 heading into this week, but not if AD had anything to say about it. The Brow outdueled the Joker 22-16 in the second half of Sunday’s game and put the nail in the coffin by drilling the most iconic shot of the Kentucky product’s career to date, sealing a 105-103 victory.

King James, on the other hand, was much less than spectacular in the second half of LAL’s Game 1 contest and appeared to be comfortable playing second-fiddle to Davis, as James went 2 for 9 from the field in the final two stanzas of the contest while allowing AD to take the game-winning shot trailing by one.

There is no doubt the Lakers end up winning this series, given the pedigree and talent of the players on their roster, but this series is far from over if we do not get the fourth quarter magic we are accustomed to from LeBron in the post-season.

They may be trailing 0-2 in this series, but the Nuggets have not looked horrible against the heavily favored Lakers. Denver entered the second half of Game 1 in a closely contested ballgame and taking LeBron and company down to the wire in Game 2.

Jokic was great in the second half of Sunday night’s game, going for 16 points, 4 rebounds, and 5 assists when it mattered most for the team from the Mile High City. I expect Denver to have a bad taste in its mouth from last game and play a wire-to-wire energy packed contest on Tuesday, really making it difficult to make up for the six points the oddsmakers are laying again.

I am sure King James being listed on the injury report gives Lakers fans everywhere an unnecessary amount of anxiety, but there is no need to fear. His designation for Game 3 is just the same nagging groin issue that has been bothering him throughout the last few years in L.A. He should be ready to roll for Tuesday’s contest, but as always, keep an eye on his status.

The Lakers come into Game 3 of these Western Conference Finals boasting a 2-0 lead and carrying a lot of momentum, but I am rolling with Denver +6 in this matchup anyway.

This is the Nuggets’ last chance to make this a series, and they have already proven just how dangerous they can be with their backs against the wall in their previous two series with the Clippers and Jazz. Six points feels like way too many points in the Lakers direction, this game should be closer than that.