Western Conference action resumes on Wednesday night with the Portland Trail Blazers visiting the Los Angeles Clippers in the nightcap on NBA TV, and VI has you covered with free game previews and best bets for all the top matchups on this week’s slate.

The Trail Blazers are off to a 2-1 SU start to the year with victories over the Rockets and Lakers, but will enter tonight’s contest as an underdog for a fourth consecutive game, as the Clippers currently sit as 3.5-point favorites over Portland. 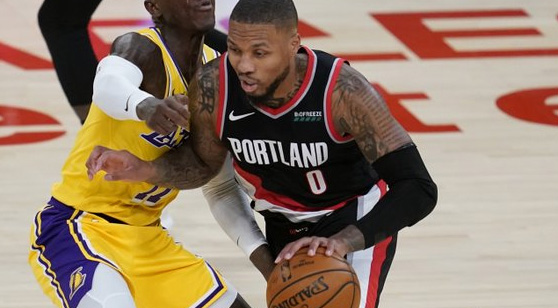 Damian Lillard and the Trail Blazers will be looking to complete the Staples Center sweep on Wednesday versus the Clippers. (AP)

In Kawhi Leonard’s first full-game absence of the season, the Clippers inevitably became the laughingstock of the NBA for a brief period of time following their iconic 51-point loss to the Dallas Mavericks last Sunday. Los Angles emptied the bench against the Timberwolves last night though and walked out of Staples Center with a dominant victory of its own without their superstar, 124-101.

Portland suffered an ugly loss to the Jazz on opening night, 120-100, mainly due to a miserable all-around performance from Damian Lillard (9 points, 4-12 FG, 1-7 3PA). The Blazers have pulled off upsets over tough opponents in each of their last two contests though, with SU victories over the Lakers and Rockets prior to tonight.

Interestingly enough, the Blazers and Clippers had a matchup during last year’s regular season in which Portland was near full-strength and Los Angeles was missing Kawhi. Lillard and C.J. McCollum combined for 51 points in the contest, but it still was not enough to propel the Blazers past the Clips, 122-117.

The Blazers have been one of the most profitable teams in the NBA so far this year with two SU victories over opponents that they were deemed ‘underdogs’ against (LAL, HOU). Having Lillard and McCollum in the backcourt gives Portland the ability to give all the top teams in the West a run for their money on any given night, but the Blazers do not possess nearly the amount of depth of teams like the Clippers.

Portland is undeniably a fun team to watch, but do not be fooled by their recent success. They have not yet reached the same tier of excellence teams like the Lakers, Rockets, and Clippers, and I expect that to show through at some point.

The current line (-3.5) indicates to me that the books are expecting Los Angeles to be without Leonard in this contest, so if you are planning on backing the Clippers, be ready for that.

The Clippers are already notorious for underperforming during the second half of back-to-back sets (L6 – 1-5 ATS), so Leonard’s status is something to be weary of when considering picking a side for this contest.

After missing two consecutive contests with a mouth injury he received on Christmas Day, Leonard is listed as questionable again for Wednesday night’s matchup with the Blazers.

Make sure to keep an eye on his status as we approach tipoff, with PG13 likely having some sore legs after playing nearly 30 minutes less than 24 hours ago.

Lillard had a night to forget against the Jazz during Portland’s first game of the regular season (9 points, 7 assists, 4 rebounds, 14.3% 3PFG), but has easily gotten back into his groove from last season over the Blazers’ last two contests, averaging 31.5 points, 7 assists, and 4.5 rebounds in those games.

Lillard averaged 30 points per game for Portland last season and I expect him to score at least that many points in a matchup with the Clippers tonight that I suspect the Blazers will have a chance of winning down the stretch.

The Blazers have played extremely sound basketball across their last two contests with victories over the Rockets and Lakers. Now, they find themselves matching up with the Clippers who are entering the second half of a back-to-back set and could potentially be without one of their superstars in Leonard.

I expect Portland to give the Clippers everything they can handle on both sides of the ball on Wednesday night, maybe even pulling off a third consecutive upset against Western Conference contenders.