Michael Porter Jr. is expected to return to the lineup when the Denver Nuggets play host to the Dallas Mavericks on Thursday night.

Porter hasn’t played in a little more than a week due to COVID protocols, and Denver has missed the third-year pro. He is the X-Factor for the Nuggets this year as they look to take on the contenders in the Western Conference. 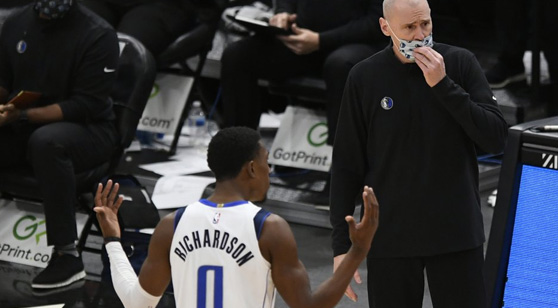 Rick Carlisle and the Mavericks have gone 2-3 both SU and ATS on the road this season. (AP)

Dallas did not get off to a good start this season. The Mavericks lost a close game to the Phoenix Suns in their opener before falling to the Los Angeles Lakers on Christmas.

They have alternated wins and losses since that point though, starting with a 124-73 annihilation of the Clippers on December 27. Dallas set a record in that game by taking a 50-point lead into halftime and shifting into cruise control from that point forward.

Dallas suffered double-digit losses as a favorite against both Charlotte and Chicago in the past week, but the Mavs also beat the Miami Heat 93-83 as a short home underdog and went on the road to knock off the Houston Rockets 113-100 in their last game on Monday.

Denver started the season with four losses in its first five games. The Nuggets were edged by Sacramento in overtime in their season opener, and their only victory in that early stretch came against Houston in the Mile High City. They had some issues on defense, allowing at least 120 points in three of those games.

We saw the Nuggets bounce back with consecutive wins over Minnesota to start the week. Denver went on the road to beat Minnesota 124-109 behind Jamal Murray’s 36 points on Sunday and followed that up with a 123-116 win on Tuesday thanks to Nikola Jokic’s 35 points and 15 rebounds.

Dallas has had two days off after its first back-to-back of the season earlier this week. The Mavericks needed some rest after traveling around the country for the first two weeks, but they will return to the Lone Star State for a short homestand starting Saturday.

Doncic is one of the frontrunners to win NBA MVP this year. He came into his own last season, willing the Mavericks to the playoffs almost single-handedly at times. The third-year player leads Dallas in every major offensive category coming into this game with 25.8 PPG, 9.0 RPG, and 7.2 APG.

However, he has had some major shooting woes from downtown, making just 19.5 percent of his threes despite averaging almost seven attempts from distance a game.

It isn’t just Doncic that has struggled from beyond the arc though. Dallas is making just 32.2 percent of its three-point attempts this season.

Josh Richardson, Jalen Brunson, and Dorian Finney-Smith are all making less than a third of their triples.

Tim Hardaway Jr. and Maxi Kleber have been the only reliable shooters from that distance this season with Hardaway making 40.7 percent of his threes and Kleber converting on 46.2 percent of his attempts.

Denver hasn’t been able to make the most of a relatively light first two weeks. The Nuggets will be at home for six of their first eight games after Thursday night, and the only two playoff teams from last year they faced in that time were the Clippers and the Mavericks.

Jokic is currently averaging a triple-double this season. The 7’0 center is the most talented interior passer in the NBA. He currently leads the league with 11.9 APG, as Denver runs its offense through the big man.

Jokic leads the team in points (24.1 PPG), rebounds (11.7 RPG), and steals (1.4 SPG), so Dallas is going to have to find a way to slow him down on the inside. As good as Jokic has been through the first two weeks, he has also been mistake-prone though with over five turnovers a game and almost four fouls per game.

Murray works well with Jokic off the pick and roll. That allows the guard to get the ball in good positions, and he has been great at knocking down his shots through six games.

Murray is averaging 22.2 PPG while shooting 48.9 percent from the floor and 39 percent from beyond the arc. He hasn’t found a way too impact games aside from his scoring though with 4.0 RPG and 3.0 APG.

The two-man game with Jokic and Murray allows other players to see clean shots at the rim. That has led to Jeff Green, Paul Millsap, and Michael Porter Jr. sinking at least 56 percent of their field goals and 42 percent of their three-point attempts this season.

Those numbers have helped make Denver’s offense one of the most efficient in the league despite Will Barton struggling.

Porter’s return will give Denver the spark it needs to carry the day on Thursday. He has elite talent when healthy, and that will give the Nuggets another outlet on offense. Dallas doesn’t have anyone that can stop Jokic, so he could post big numbers.