Last year’s regular season conference champions will square off in primetime on Thursday night with the Milwaukee Bucks set to host the Los Angeles Lakers on TNT, and VI is getting you ready with another slate of Best Bets and Game Previews to help handicap all the action.

The Lakers opened as a one-point favorite over the Bucks at most shops but as we approach the start of this contest, we are seeing some reverse line movement – with the public currently all over Los Angeles in this matchup, yet the Bucks now head into Thursday as one-point favorites.

While the total for this contest sits at OU 228.5 – the highest ‘over-under’ for a Laker’s matchup since they played the Spurs back on New Year’s Day (OU 229). 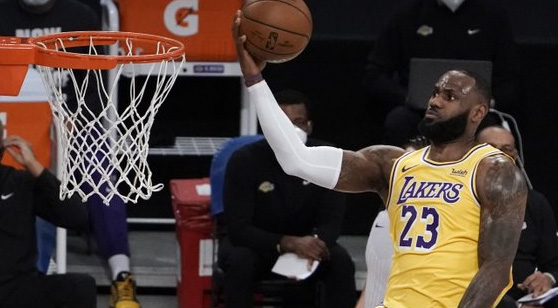 LeBron James and the Lakers will begin on a seven-game road trip on Thursday when it travels to Milwaukee. (AP)

The Lakers had a five-game winning streak snapped in their most recent affair against the Warriors, as Los Angeles built a hefty 16-point lead prior to the conclusion of the first half but went stone cold down the stretch of the contest – shooting 31% from the field and 11% from 3-point territory in the fourth quarter.

While the Bucks had a 4-game winning streak of their own snapped in a 2-point loss to the Nets this past Monday, as the All-Stars accompanying the Barclays Center put on a scoring spectacle during a narrow Brooklyn victory.

Kevin Durant, James Harden, Giannis Antetokounmpo, Khris Middleton, and Jrue Holiday scoring 145 of the 248 total points in the contest on a combined 50% from the field.

The Bucks and Lakers split a pair of contests during last year’s regular season, but never got the opportunity to meet up for a seven-game set due to Milwaukee being eliminated by the Miami Heat in last year’s Eastern Conference semifinals.

The first matchup between these teams was essentially an old-school 1-on-1 battle between Antetokounmpo and Anthony Davis, as both big men tallied over 30 points, 10 rebounds, and 5 assists in a 7-point victory for Milwaukee.

While LeBron James decided to take matters into his own hands the second time around – leading both teams in scoring with 37 points, 8 rebounds, and 8 assists on 57.1% from the field in a 10-point Lakers’ victory.

The Lakers currently sit atop the Western Conference alongside the Clippers, both cruising to casual 11-4 records through roughly a month of the new season.

Prior to the Lakers’ most recent loss to the Warriors, Los Angeles had won and covered in four consecutive contests, with the ‘under’ cashing in three of those wins.

The Lakers are surprisingly average against the spread (8-7), and I say “surprising” because it feels like every time you turn on a TV past 10 P.M., the Lakers are hammering some subpar Western Conference opponent.

While Los Angeles may not be reliable against the spread on a nightly basis, you can count on them to play suffocating defense and cash ‘under’ tickets – with the total going ‘under’ in 10 out of the Lakers’ last 13 games.

After a rocky 2-3 start to the season, the Bucks appear to have somewhat found their stride – winning seven of their last nine games and going 4-5 ATS in this span.

Prior to Milwaukee’s most recent matchup with the Nets (O 239.5), ‘under’ tickets had cashed in four consecutive Bucks’ games – which has been a complete change of pace for them considering ‘over’ tickets cashed in seven out of their first nine contests.

The Bucks currently rank 24th in the NBA against the spread (6-8) – which is a disappointing feat after posting a top 10 record ATS last season while also averaging the largest average point-spread.

James and Davis both find themselves listed on the injury report as game-time decisions ahead of Thursday night’s matchup with the Bucks. I have to imagine both guys are going suit up for this primetime affair on TNT, considering LeBron has been listed as questionable in every contest so far this season and AD appears to already be trending towards ‘probable’ in more recent reports.

The Bucks acquired Holiday this past off-season as an attempt to build a roster that Giannis would desire to resign with, and the move appears to finally be coming to fruition – with the Bucks winning four out of their last five games and Holiday chipping in 20+ points in two of his last three.

Back Holiday to score 16 or more points in a fourth consecutive games as Milwaukee will likely need to utilize Holiday’s scoring versatility throughout the course of this contest if they intend on keeping up with the defending champs on Thursday night.

Bottom Line: The Lakers are the best team in the NBA and are receiving a point against an inferior opponent on Thursday night.

Milwaukee has the foundations of a great basketball team, but is still missing at least one more piece to the puzzle before they can be considered in the same category as teams like the Lakers.

It should be a great game, and I can envision some ways that the Bucks sneak away with a win in this contest.

But the best thing to do is here, is to just roll with the better team – and that team is undeniably the Lakers in this matchup.