The Clippers are tied with the Lakers atop the Western Conference standings, and they have won seven straight games coming into Tuesday night’s showdown with Trae Young and the Atlanta Hawks.

This will be the first in a six-game road swing for the Clip Show that won’t see them return to Los Angeles until February 5 and the team will be short-handed for this matchup and maybe more. 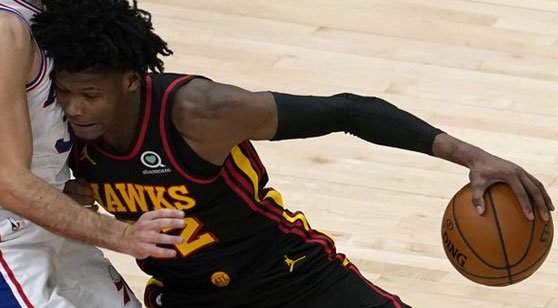 De'Andre Hunter and the Hawks return home for a tough battle with the red-hot Clippers at State Farm Arena. (AP)

Atlanta has won three of its last four games coming into its home game with the Clippers. The Hawks had no trouble getting past Minnesota twice as Young and Clint Capela each had fantastic games, and they held on to beat the Detroit Pistons in overtime.

Those are two of the three worst teams in the NBA though, so those victories aren’t a good barometer for the 8-8 Hawks.

The Hawks were without both Young and Capela in their most recent game. Without its two best players, Atlanta was a double-digit road underdog against Milwaukee on Sunday.

The Bucks jumped out to a 17-point lead at the end of the first quarter, and the Hawks could never get back into it although they weren’t run off the court.

John Collins and De’Andre Hunter both had 30 points while shooting at least 60 percent from the floor. Unfortunately, the rest of the team combined to go 17 for 43 from the floor and 6 for 25 from downtown.

The Clippers haven’t lost since taking on the Warriors in the Bay Area on January 8. Los Angeles has won seven straight games since that defeat, and the Clips have held their last six foes to 106 points or less.

They won four consecutive games by double digits before only beating Oklahoma City by eight points on Sunday.

Kawhi Leonard scored a game-high 34 points on 14 of 24 shooting for the Clippers in the win. He nearly notched a triple-double with nine rebounds and eight assists.

Ivica Zubac did record a double-double in 24 minutes of action, while Serge Ibaka only missed one shot from the floor.

Leonard is having a great season for the Clippers. He is averaging 25.9 PPG, 5.4 RPG, and 5.7 APG, stuffing the stat sheet while he continues to play elite defense on a nightly basis. He is sinking 50.5 percent of his field goals, 41.9 percent of his triples, and 90 percent of his free throws to this point.

Leonard’s play is a big reason why the Clips have one of the best defenses in the NBA too. Unfortunately, he's going to miss this game tonight due to quartine issues.

The Clippers might not have Paul George or Patrick Beverley available for this game. George didn’t play the final five minutes of the fourth quarter due to tightness in his hamstring on Sunday, while Beverley left at halftime of that game and didn’t return with a knee injury.

George is having a nice year, becoming the Clips’ most efficient shooter. He is averaging 23.9 PPG, 6.2 RPG, and 5.4 APG to be nearly as well-rounded as Leonard, and he is knocking down 50.4 percent of his field goals, 48.4 percent of his threes, and 90.7 percent of his free throws.

Beverley is one of six players hitting at least 40 percent beyond the arc for the best three-point shooting team in the league by a mile. The Clippers are knocking down 42.3 percent of their threes, and they are a full two points better than any other NBA team.

Marcus Morris is expected to be available after missing Sunday’s game against Oklahoma City due to a stomach illness.

Young sat out of Sunday’s game against Milwaukee with back spasms, while Capela missed the game with a hand injury. Both players are considered 'questionable' on the injury report, and the odds will change significantly depending on the status of Atlanta’s two best players closer to tip off.

Currently, Young leads the Hawks in points (25.3 PPG) and assists (8.7 APG). The young guard is still committing turnovers a little too often (4.3 TPG), but he has the talent to become one of the NBA’s best ten players.

Capela is a double-double machine with 14.2 PPG and 14.5 RPG. He is great at getting second chances for Atlanta with 4.5 ORPG. His presence allows Collins space to operate, so it’s unlikely Collins has great numbers for the second straight game with Capela out of the lineup.

De’Andre Hunter is the second leading scorer on the Hawks with 17.4 PPG.

The second-year player out of Virginia has improved on the offensive end this year, seeing significant spikes in his shooting percentages. Hunter is hitting 52 percent of his field goals this season after making 41 percent of his attempts last year, and his three-point shooting percentage has risen from 35.5 percent to 39.1 percent. His 33 points against the Bucks on Sunday were a career high.

Hunter’s growth stands in stark contrast to Cam Reddish. Reddish was a lottery pick in the same draft as Hunter, but he has struggled to make an impact.

Given two of each team’s four top scorers are considered questionable to play in this game, it’s going to be important to watch the injury report.

The under looks to be the best bet with this uncertainty, and the under is 12-4 in Atlanta games this year.