Eastern Conference NBA action returns to center-stage with the Nets set to host the Raptors for a playoff rematch at the Barclays Center this Friday night, and VI is getting you ready with another slate of Best Bets and Game Previews to help handicap all the evening’s top matchups.

The Nets come into this contest as a 5.5-point favorite – snapping the Raptors 3-game streak of avoiding the ‘underdog’ tag.

While the total for Friday night’s matchups currently sits at OU 241.5, easily marking the highest ‘over-under’ for a Raptors game so far this year. 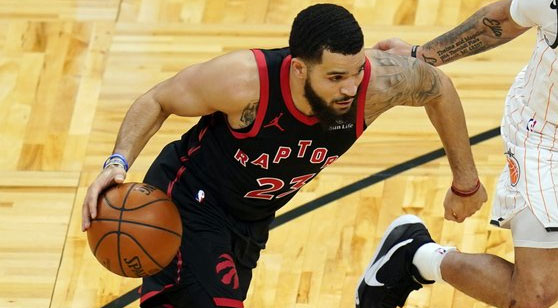 Raptors' guard Fred VanVleet is coming off a 54-point effort in Toronto's victory at Orlando. (AP)

The Nets opened their previous matchup with the Clippers as an ‘underdog’ for just the second time since acquiring James Harden back in mid-January. Brooklyn ultimately prevailed though, as Kyrie Irving seemed to bury every shot he attempted against Kawhi Leonard and company – scoring 39 points on 15-23 from the field and 6-8 from downtown in the victory.

Brooklyn’s victory over the Clippers this past Monday night makes them 7-3 SU and 4-6 ATS since the acquisition of Harden.

On the other hand, Toronto heads into Friday’s contest coming off back-to-back victories over the Orlando Magic, concluding a 3-game losing streak in which the Raptors allowed opposing teams to score 123.3 points per game across that span.

Toronto’s most recent affair was all about Fred VanVleet, as the Wichita State product went off for a career-high 54 points on 17 of 23 from the field in the Raptors second consecutive win and cover against Orlando.

(*All matchups in NBA Bubble in Orlando)

Even with the Leonard's departure before last season, the Raptors still managed to take three of four regular season contests from the Nets last year, with Brooklyn’s only victory coming in a game that Toronto shot just 37.8% from the field in.

Toronto lucked out during the first round of last year’s post-season by drawing a matchup against the Nets who were already known to be missing Irving.

Brooklyn got swept out of the playoffs in just four games by Toronto, but none of those matchups contained the Nets’ current top three scoring options (Kevin Durant, James Harden, and Irving).

The Nets have a completely different look to their starting lineup this time around though, with Joe Harris being the only player starting in Friday’s game that started against Brooklyn last season.

The ‘over-under’ split 2-2 in the four regular season meetings between Brooklyn and Toronto last season, but the largest total among those matchups was OU 224.5 and that game stayed ‘under’ the number.

Prior to the acquisition of Harden, the Nets were slightly below average against the spread – going 6-7 ATS during their first 13 matchups of the season. But since the Beard joined the starting lineup, the oddsmakers have added some extra juice to Brooklyn’s projected point-margins, causing them to fall to 2-6 ATS in games that they have been favored in since trading for Harden.

The ‘over’ has cashed in 16 out of the last 17 Nets games, with the only ‘under’ across that stretch coming during the back-half of a double-header against the Heat. 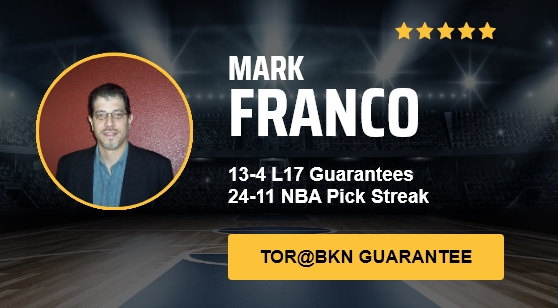 Iman Shumpert signed with the Nets this past weekend and is just waiting to pass COVID-19 protocols before joining his teammates in Brooklyn on the court.

While OG Anunoby and Patrick McCaw are both set to miss Friday’s contest with leg injuries, likely sliding Terrence Davis into the starting lineup.

DeAndre Jordan was relatively quiet in the Nets victory over the Clippers this past Monday but prior to that, he had tallied eight or more points in eight consecutive contests – while cracking double-digits in four matchups across that span.

Jordan got off to a slow start to the season, scoring five points or less in 10 of his first 11 games. But since trading away Jarett Allen in a package for Harden, he appears to be moving much better within Brooklyn’s offense, going over 7.5 points in eight of ten contests following the acquisition.

I’ll back Jordan to score at least five buckets against the Raptors on Friday.

The Nets head into Friday’s contest coming off the most impressive win of the Harden-era thus far, with a 124-120 victory over the Clippers this past Tuesday. Brooklyn has three elite offensive weapons at its disposal, making them virtually impossible to defend if everything is clicking for them on all cylinders. I’m going to roll with the Nets to cover here against what is currently a far inferior opponent.