NBA action returns to ESPN on Wednesday night with another star-filled matchup between the Atlanta Hawks and the Dallas Mavericks, and VI is getting you ready with more Best Bets and Game Previews to help handicap all the top games on the evening’s slate.

The Mavericks head into Wednesday’s contest as a 4-point favorite, marking the seventh consecutive matchup that Dallas has been listed as a favorite in. While the total for tonight’s Mavs-Hawks game currently sits at OU 233 – the highest ‘over-under’ set for a Hawks matchup since they played Washington back on January 29th. 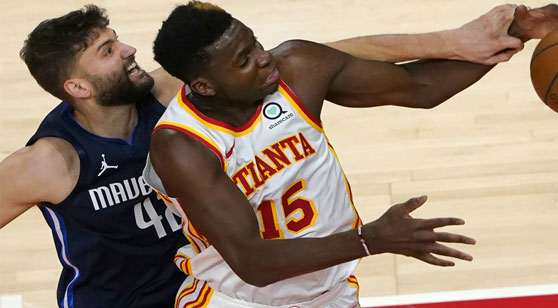 Dallas and Atlanta meet for the second time in seven days as the Mavs captured the first matchup. (AP)

After snapping a six-game losing streak with a win over the Hawks past Wednesday, the Mavericks have now won three of their last four games, with their only loss across that stretch coming in a contest that the Warriors managed to rack up 147 points on 23-27 from long-range.

Dallas’ most recent affair resulted in a narrow, 5-point victory over the Timberwolves (MIN +10), as Kristaps Porzingis led the way for the Mavericks in scoring for the first time this season with 27 points on 52.6% from the field.

While the Hawks managed to snap a 3-game losing streak of their own this past Saturday as Trae Young, Clint Capela, John Collins, and Kevin Huerter all chipped in 19+ points in Atlanta’s 11-point victory over the Raptors.

Dallas and Atlanta split a pair of games during last year’s regular season, with both of those matchups comfortably staying ‘under’ the total set for Wednesday’s contest – OU 233.5.

The most recent matchup between these teams occurred this past Wednesday though, which resulted in a 6-point victory for the Mavericks as Doncic and Porzingis contributed a combined 51 points on 45% from the field in the win.

Collins led the Hawks in scoring in their most recent affair with the Mavericks – racking up 35 points on 16-21 from the field to go along with his 12 rebounds.

On the other hand, the Hawks have significantly slowed down their pace of play this year, which has led to the ‘under’ cashing in 16 out of Atlanta’s first 23 games. Make note though, that the ‘over’ hit in two out of the Hawks last three games, with all three of those totals being set in the low 220’s.

The Hawks currently own the seventh playoff spot in the Eastern Conference with an 11-12 record, but clearly the oddsmakers still aren’t buying into Atlanta as a playoff team – listing them as ‘underdogs’ in five of their last seven matchups.

The Mavericks come into Wednesday night having won three of their last four games, while managing to cover the spread in just one of those contests, which came in a matchup against Atlanta.

While the ‘over’ is just 12-13 in Dallas games so far this year, the Mavericks’ 127-122 victory against the Wolves this past Monday cashed ‘over’ tickets in a fourth consecutive contest containing Luka Doncic and company (O 228.5).

While the Mavericks’ injury report remains empty, Rajon Rondo and De’Andre Hunter are both set to miss the Hawks matchup with Dallas this Wednesday. Look for Huerter to be the main beneficiary to those absences.

In the Hawks' loss to the Mavericks this past week, Collins tied a career-high 35 points on 16-21 from the field as Atlanta’s 116 points on 50% shooting still wasn’t enough to take down the Mavericks on that given night.

While I don’t necessarily anticipate another 30-point explosion from him this time around, I’ll still back him to eclipse 19 points against a Dallas team notorious for struggling defensively with big men wielding his caliber of scoring ability.

After closing out the month of January on a six-game losing streak, the Mavericks appear to finally be trending in the right direction, having won three of their last four games now, which includes a 122-116 victory over the Hawks just seven days ago.

During last week’s matchup between Dallas and Atlanta, the Hawks managed to shoot a better percentage from the field than Dallas (ATL – 50%, DAL – 46.2%). But it was ultimately the Mavericks who were able to escape State Farm Arena with a 6-point win and cover on the road.

I’ll back Dallas to cover in a second straight matchup with Atlanta.