Wednesday’s NBA schedule is packed with quality matchups from top-to-bottom, including what is expected to be a heavyweight slugfest between Western Conference contenders with the Clippers set to host the Jazz in the final contest of the evening.

VI will get you ready with more Best Bets and Game Previews to help handicap all the top matchups on tonight’s slate.

Los Angeles heads into this contest as a short ‘underdog’ against the visiting Jazz, marking just the fifth time that Kawhi Leonard and company have not been favored in a matchup this year.

While the total for Wednesday’s matchup currently sits at OU 228.5 – which is just the sixth time this season that the ‘over-under’ for a contest containing the Jazz has been set at 228 points or higher. 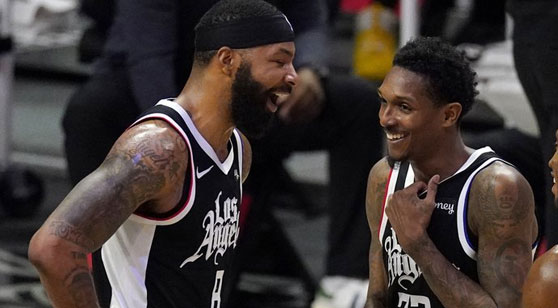 The short-handed Clippers look to beat the red-hot Jazz at home on Wednesday night. (AP)

The Jazz come into Wednesday’s matchup riding an 8-game winning streak, now boasting SU victories in 19 out of their last 20 games and their only loss across that stretch coming during their trip to Denver back in late-January.

Utah hosted Philadelphia in its most recent affair, which was headlined by extraordinary scoring displays from Jordan Clarkson (40 points) and Ben Simmons (42 points) as over 255 total points were scored in an 11-point victory for the Jazz (O 225).

On the other hand, Los Angeles is currently riding a 4-game winning streak of its own, with their most recent loss coming at the hands of the Kings back on February 7th – which was a contest Paul George did not participate in.

Leonard and George both sat out with lower extremity injuries during the Clippers most recent matchup against the Heat, but it didn’t appear to diminish LA’s game plan offensively in the contest – considering they managed to put up 125 points on 55% from the field and 47% from downtown during the absence of both their superstars.

The Jazz have won three of their last four regular season matchups against the Clippers, with their most recent victory coming in a relatively low-scoring affair back on New Year’s Day 2021.

Utah entered the fourth quarter of its New Year’s Day matchup leading Los Angeles by 18 points, but 35 points on 57.1% shooting from the Clippers during the final stanza resulted in a slim 6-point victory for the Jazz.

Donovan Mitchell was not a very efficient part of the offense during Utah’s most recent victory over the Clippers – tallying just 15 points on 6-14 from the field and 3-10 from three-point territory in the contest.

Mike Conley filled his scoring void quite nicely in the matchup though, racking up 32 points on 55% from the field and 7-14 from downtown to headline the Jazz win.