The best team in the NBA will play its last home game before the All-Star Break on Wednesday night when the Utah Jazz host the Los Angeles Lakers.

Utah will enter the halfway point of the season with the best record in the league barring an utter collapse over the next week. However, the Jazz have yet to face the defending champions due to this year’s somewhat wonky schedule. 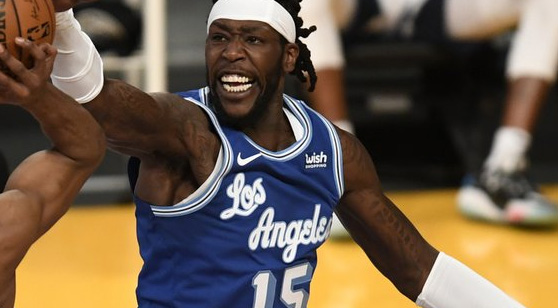 The Los Angeles Lakers continue to be a great 'under' bet on the road, producing a 13-3 mark as visitors. (AP)

Utah has been red hot after a 4-4 start to the season.

The Jazz have won 21 of their last 23 games to hold a 25-6 record after two months of play. Their only losses during this run were on the road against Denver on January 31 and in LA against the Clippers last Friday. Utah hasn’t lost a home game since losing its first two in Salt Lake City to Minnesota and Phoenix, recording 14 straight wins in SLC.

We’ve seen multiple teams set franchise records for made three-pointers in a game this season. Utah became the most recent team to accomplish that feat against Charlotte on Monday. The Jazz went 28 of 55 from beyond the arc in the 132-110 victory with Joe Ingles and Georges Niang each knocking down seven triples.

Los Angeles has struggled without Anthony Davis in the lineup. Davis is going to miss at least four weeks with calf and Achilles’ tendon injuries, leaving the Lakers without their second-best playmaker. He suffered the injury on Valentine’s Day in LA’s loss to Denver, and the Lakers have lost four of their last five games since the injury.

The Lakers’ lone win was against lowly Minnesota last Tuesday. They have since lost three straight home games against Brooklyn, Miami, and Washington. Los Angeles failed to top 100 points in the first two games before Monday night’s 127-124 overtime loss to the Wizards.

LeBron James went 14 of 29 and topped the Lakers with 31 points, and Montrezl Harrell provided 26 points off the bench. However, it wasn’t enough as the Wizards were able to get to the free throw line 33 times on the evening, helping Russell Westbrook and Bradley Beal end the night with 30+.

James means everything to this team with Davis out of the lineup. He is averaging 25.8 PPG, 8.2 RPG, and 8.1 APG, and he is a triple-double threat each night. The onus is on him to create once again without Davis and Schroder as those are the Lakers’ second- and third-leading scorers.

Without Davis on the court, James has pressed a little too much and doesn’t have the same ability to shake his defender and get off open looks from beyond the arc. He has been abysmal from downtown over the last two weeks, going just 6-37 from distance in his last six games. James turned the ball over eight times against the Wizards on Monday night too.

Harrell is unlikely to get much done on the offensive end with Gobert in the paint. He has scored at least 17 points in three of his last four games, but his impact will probably be muted in this game.

That means the Lakers will have to rely on their backcourt in this game. That has been an issue as there hasn’t been reliable scoring from LA’s guards.

Kentavious Caldwell-Pope and Alex Caruso are the only two Lakers that are making at least 40 percent of their threes. Caldwell-Pope recorded over 20 points for just the second time all season on Monday, so he might be the second banana for the Lakers against the Jazz.

Jordan Clarkson is currently a huge favorite to be named the NBA’s Sixth Man of the Year. Clarkson has yet to start a game in his 31 appearances for the Jazz, but he is the team’s second leading scorer with 18.3 PPG. The ex-Laker has really come into his own with the Jazz, providing Utah with some quality minutes off the bench.

He is making 45.7 percent of his field goals and 38 percent of his threes on the season. Clarkson has been at his best against top teams too, as he dropped 40 points on the 76ers last Monday.

That has benefited Utah’s established stars.

Rudy Gobert and Donovan Mitchell are both having fine seasons for the Jazz.

Gobert is a double-double machine with 13.9 PPG and 13.5 RPG this season. He has recorded a double-double in eight of his last ten games, and he is making 64 percent of his baskets.

Gobert is an old school big man that isn’t a three-point threat and doesn’t rack up assists. The Frenchman is one of the best low-post threats in the league, and he is a constant nuisance on the defensive end.

He isn’t the most efficient shooter, but he is the one player on this team that can create his own shot consistently and score in the clutch. Mitchell has scored at least 23 points in 10 of his last 11 games, and he is averaging 27.4 PPG in February.

This is not a good matchup for the Lakers. A healthy Davis would give them a lot more flexibility when it comes to dealing with Gobert and the Jazz defense, but his absence will limit their effectiveness.