Western Conference NBA action will take center-stage on Wednesday night with the Trail Blazers set to host the Warriors during the final game on ESPN’s slate. So, VI is getting you ready with a variety of betting resources to help handicap all the evening’s top matchups.

The Blazers head into Wednesday’s matchup as a 3-point favorite against the visiting Warriors – marking the fourth time in the last five games that Portland has been listed as an underdog.

While the total for this event currently sits at OU 234, which is the highest total set for a Warriors games since they played the Nets back on February 13th (O 246). 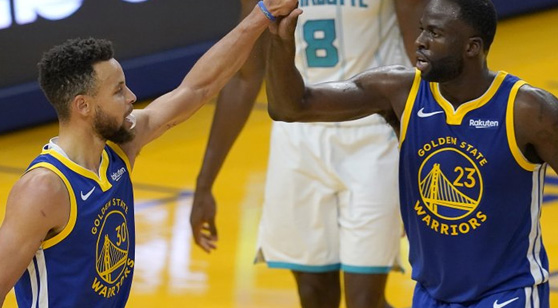 The Warriors and Blazers will be meeting for the third time this season, but this will be the first encounter in Portland. (AP)

The Trail Blazers snapped a three-game losing streak with a win over the Hornets in their most recent affair – propelled by 50 combined points from Carmelo Anthony and Robert Covington in a 12-point victory for Portland.

On the contrary, the Warriors had a three-game winning streak snapped in a loss to the Lakers during their most recent contest, as Los Angeles built a 20-point lead prior to the conclusion of the first quarter and Golden State was never able to shoot its way back into the game.

The Warriors and Blazers split their first two matchup during this year’s regular season, with both of those contests ending in a blowout of 15 or more points.

The first matchup between these teams took place on New Year’s Day, which resulted in a 25-point win for Portland behind 62 combined points on 52.3% shooting from Damian Lillard and C.J. McCollum.

While the second matchup between Portland and Golden State was the Warriors turn for triumph – as Stephen Curry went off 62 points on 58% from the field during a 15-point victory for head coach Steve Kerr’s team.

The Warriors are not a team that strikes the average bettor as a group that fails to produce on the scoreboard frequently, but the total has now stayed ‘under’ in four or the last five games containing Golden State – with the number set in three of those matchups landing in 230’s like the one set for Wednesday night’s tilt.

Sunday’s low-scoring affair against the Lakers now makes the ‘over’ 15-20 in Warriors games this year, which ranks 26th in the league in that area (Lakers, Knicks, Rockets, and Cavaliers – only teams staying ‘under’ the total more than GS this season).

The Trail Blazers got off to a scorching hot start to February – having won and covered the spread in eight of their first 10 games to kick off the month. Portland hit a lull near the halfway point though, as matchups against the Wizards, Suns, Nuggets, and Lakers all ended in losses consecutively.

The Blazers finally got back on track with a double-digit victory over the Hornets in their most recent affair though, but Portland’s defense still appears to be in the same decrepit state we have witnessed in recent weeks – allowing Charlotte to shoot nearly 50% from the floor while LaMelo Ball cooked them for 30 points on 10-18 shooting.

Draymond Green exited the Warriors most recent contest against the Lakers with an ankle issue after spending just 12 minutes on the floor during Golden State’s 26-point loss (6 points, 1 rebound, 2 assists).

Prior to that matchup though, Green had recorded seven or more rebounds in four straight games – which gives him 7+ boards in eight of his last 10 matchups now.

I’ll back Draymond to get back to stuffing stat sheets in this contest with another ‘over’ in the rebounding department.

The Trail Blazers and Warriors have already split a pair of matchups at full-strength this year, with each team winning a contest by 15 points or more during the first two games of their regular season set.

This time around though, Portland will play short-handed against Golden State with both McCollum and Nurkic still sidelined with injuries. I’ll back the healthier squad in the Warriors to nab their second victory over Portland here.