Miami will be out to finish the first half of the regular season at .500 on Thursday night against the New Orleans Pelicans. The Heat might be the defending Eastern Conference champions, but they have had a rough time this season. They are 17-18 heading into the last day of action prior to the All-Star Break.

The Heat hosted the Pelicans on Christmas in the only previous meeting between these teams this season. Miami won 111-98 as Erik Spoelstra moved to 8-0 all-time on the holiday.

Duncan Robinson was the only Miami player with more than 20 points, as the Heat knocked down 43.2 percent of their three-point attempts in the win. 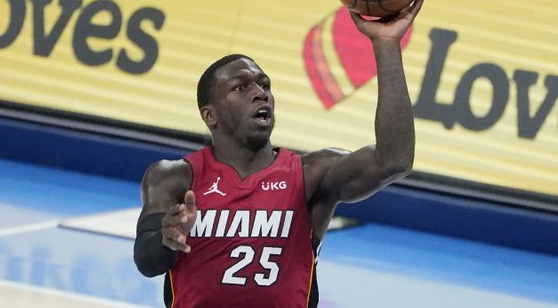 The Miami Heat have gone 8-6 against the West this season, which includes a 2-1 mark versus the Southwest. (AP)

New Orleans has largely taken one step forward and two steps back this season. The Pelicans have not been above .500 in almost two months, as they only have one winning streak longer than two games all year. They won four straight games in early February, but this team is 4-8 since that point.

The Pelicans play some of the highest scoring games in the NBA. New Orleans has seen 13 of its last 14 games go over the total, as both the Pelicans and their opponents have tallied at least 110 points in 12 straight tilts.

That trend continued on Wednesday night against Chicago. The Bulls beat the Pelicans 128-124 as Zach LaVine scored 36 points with Chicago shooting 50/40/90 as a team. New Orleans started off slow but picked things up after halftime with 79 second half points (45 points in the fourth quarter).

Miami is finally starting to look like the team that took the Eastern Conference by storm in the Orlando bubble. The Heat upset both Milwaukee and Boston to make it to the NBA Finals last postseason, but they were sitting at 11-17 two weeks ago. They won six straight games to move to .500 over the last two weeks with victories over the Lakers and Jazz during that stretch.

The Heat slipped back under .500 with their loss to the Atlanta Hawks on Tuesday night though. It was a throwaway performance for Miami who had one of its worst outings of the season with Jimmy Butler sidelined for the second consecutive game. The Heat were almost doubled up on the glass (47-26) as Bam Adebayo had just two rebounds.

Jimmy Butler might not suit up for the Heat on Thursday night. Butler has missed the last two games with inflammation in his right knee, but he did travel with the team to New Orleans for tonight’s clash. His presence or absence will have an effect on the line, so keep an eye on his status.

Bam Adebayo is listed as questionable too, but he is expected to suit up for the Heat. Adebayo is still coming into his own with 19.2 PPG and 9.5 RPG on the season. He is making over 55 percent of his field goals, and he is certain to grab more rebounds than he did against Atlanta on Tuesday night provided he plays. Adebayo had six straight double-doubles prior to that performance, making over 50 percent of his field goals in five of those six games.

Miami’s three-point shooting is not as reliable as it was during last season’s run. Tyler Herro has fallen back to Earth with his performance, as he is making 44.2 percent of his field goals and 35.2 percent of his threes. Herro is only shooting 32.8 percent from beyond the arc on the road this year.

Kendrick Nunn might be primed for a big performance over the second half of the season. Nunn finished second behind Ja Morant in Rookie of the Year voting last year, placing one spot ahead of Williamson. He has been open about how long it has taken him to get back to full strength after contracting COVID, and he made 48.8 percent of his field goals and 43.3 percent of his threes for 17.1 PPG in February.

Zion Williamson will be making his first All-Star Game appearance this weekend in Atlanta. He’ll find out if he’s playing for either Team LeBron or Team Durant during this game as the draft will be happening at the same time.

The second-year power forward out of Duke is posting big numbers in his first full season. Williamson is averaging 25.6 PPG and 7.2 RPG for the Pelicans. He is making 61.4 percent of his field goals, and opponents are having a difficult time handling him close to the basket. Williamson is getting to the line over eight times a game.

Brandon Ingram is an excellent complement to Williamson. Ingram arrived in New Orleans as part of the Anthony Davis trade, and he has played rather well with the Pelicans. He was the team’s go-to option while Williamson was hurt for nearly all his rookie season. Ingram is sinking 47.2 percent of his baskets and 37.9 percent of his threes for a career-best 24.1 PPG. His 21 points on Wednesday night gave him 20 or more points for the seventh straight game.

New Orleans’ biggest issue has been the play of its backcourt this season. While Lonzo Ball and Eric Bledsoe are both shooting well from beyond the arc, the perimeter defense from this unit has not been good. The Pelicans are allowing opponents to make 39.5 percent of their threes, and they rank 28th in the league in that category.

At least J.J. Redick is shooting well again after a dreadful start to the season. Redick was making under 30 percent of his threes at the end of January, but he has since shot better than 45 percent from downtown.

This will be a bounce-back performance for the Heat. Although Miami might be a little short-handed, Nunn and Duncan Robinson can exploit New Orleans’ perimeter defense to pull off the upset.

The over is a better wager though considering New Orleans’ recent history.