Eastern Conference NBA action will resume on Thursday night with the Celtics set to host the Raptors to kick off the final slate of matchups before the All-Star Break. So, VI is getting you ready with a variety of betting resources to help handicap all the evening’s top contests.

The Celtics head into Thursday’s matchup as a hefty 7.5-point favorite over the visiting Raptors, which is tied for the largest point-spread set opposing Toronto this year (@MIL -7.5).

While the total for this contest currently sits at OU 217.5 – marking the lowest ‘over-under’ set for a game containing the Celtics since they matched up with the Pistons back on February 12th (U 211). 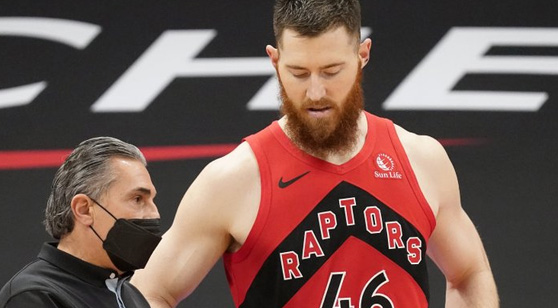 The Raptors will be facing a back-to-back spot on Thursday and Toronto has struggled to a 1-5 mark on zero days rest this season. (AP)

The Raptors head into Thursday’s matchup having lost three of the last four games, with their only victory across that stretch coming in an 11-point win over the Rockets last Friday (W, 122-111).

Toronto’s most recent affair resulted in a 14-point loss to the Pistons, which can mainly be attributed to the fact that Kyle Lowry and Aron Baynes are the only typical Raptors starters currently allowed to suit up due to NBA health and safety protocols.

On the other hand, the Celtics head into this contest riding a three-game winning streak, with their most recent defeat coming at the hands of the Hawks over seven days ago.

Boston’s latest triumph came in a matchup at TD Garden against the Clippers, as Kemba Walker knocked down 6-12 three-point attempts on his way to 25 points, which led the Celtics in scoring during the 5-point victory.

After winning both matchups against Toronto following the start of the new season, the Celtics are now 5-1 SU in their last six non-postseason meetings with the Raptors – with Toronto’s most recent regular season victory over Boston occurring back in December 2019.

The first matchup between these teams on the year resulted in a 12-point victory for Boston, as Payton Pritchard racked up 23 points, eight assists, and two rebounds to complement Jayson Tatum’s 40-point performance in a 126-114 win for Boston.

The second meeting between Boston and Toronto this year also resulted in a win for the Celtics, as three different players in Brad Stevens' rotation managed to put up 20 or more points in another double-digit victory for Boston (Walker, Ojeleye, Pritchard).

The Celtics and Raptors also played a seven-game series during last year’s Eastern Conference Semifinal round in the Orlando bubble, which also resulted in a victory for the Celtics (4-3).

I anticipate that Thursday’s matchup will appear drastically different than any of those post-season meetings though, considering how many key factors Toronto is expected to be missing in this matchup.

After a relatively rocky start to the season, the Raptors finally gained some traction in the Eastern Conference standings towards the end of February – as Toronto turned the calendar riding a 5-2 SU stretch to close out the previous month.

Health and safety protocols appear to finally be getting in the way for the Raptors though, considering several vital pieces to Toronto’s framework are expected to miss Thursday’s contest due to recent Covid-19 exposure – including Pascal Siakam, Fred Van Fleet, OG Anunoby, and head coach Nick Nurse.

The ‘over’ has now cashed in back-to-back Raptors games. Prior to that though, the total had stayed ‘under’ in five of the last six matchups containing Toronto.

After kicking off February with SU losses in nine of their first 14 games, the Celtics were able to close out the month with back-to-back wins over the Wizards and Pacers.

The total has now gone ‘over’ in six of the last eight Celtics’ games, with Boston’s lowest scoring affair during that span coming in a matchup with the Mavericks that had just 217 points scored between the two teams (L, 110-107).

I’m opting to stay off the total in Thursday’s matchup due to all the uncertainties surrounding Toronto’s lineup. If I were to pick a side of the ‘over-under’ to stand on in this contest though, the ‘over’ feels like the best trend to play here.

With Siakam, Van Fleet, and Anunoby all expected to miss Toronto’s upcoming matchup due to the NBA’s health and safety protocols, Lowry will most likely be the main individual tasked with picking up the slack in the scoring department for the Raptors during their tilt with the Celtics tonight.

Lowry has already scored 20 or more points in six of his last seven games. I’ll back him to score 22 or more again here, considering he is likely Toronto’s only shot at remaining competitive during Thursday’s matchup.

Boston and Toronto head into Thursday’s matchup trending in opposite directions to say the least. The Celtics appear to finally be getting their feet back under them after a disappointing month of February – now boasting victories in three straight games.

While the Raptors come into this matchup as losers in two of their last three games and will continue to play with a very limited roster due to the league’s health and safety protocols.

Boston has already beaten full-strength Toronto teams by double-digits twice this year. I’ll trust them to do the same thing against a short-handed Raptors squad in this contest.