After nearly a week-long pause for the league’s annual All-Star festivities, Western Conference action will resume on Wednesday night with the Mavericks set to host the Spurs in primetime on NBA TV. So, VI is back with a variety of betting resources to help handicap all the evening’s top matchups.

The Mavericks head into Wednesday’s contest as a 4.5-point home-favorite, marking the fourth consecutive game that Dallas has been favored in.

While the total for this matchup currently sits at OU 222 – which is just the third time this season that the ‘over-under’ for a Mavericks’ game has been set below OU 220 (O 215 vs Phoenix, U 219 vs Phoenix). 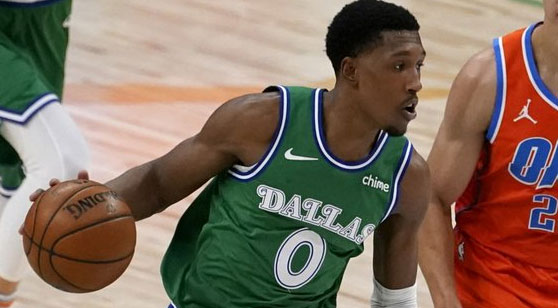 Josh Richardson and the Mavericks welcome in the rival Spurs on Wednesday to start the second half. (AP)

The Mavericks come into Wednesday’s matchup having won five of their last six games, with their only loss across that stretch coming in a tough battle against the 76ers, 111-97.

Despite Luka Doncic sitting out during Dallas most recent affair against Oklahoma City, the Mavericks still managed to pull out a 10-point victory over the Thunder in a game that both offenses appeared completely discombobulated in (OKC % 33 – 33-23-65, DAL % – 39-20-79).

Likewise, San Antonio’s most recent matchup also came against Oklahoma City. The Spurs’ meeting with the Thunder didn’t go quite as well as the Mavericks did though – as Shai Gilgeous-Alexander had a career-day with 33 points on 11-19 shooting in a 5-point victory for OKC.

The Mavericks have now won four of their last five regular season matchups against the Spurs, with only one of those victories coming by a margin of less than five points in December 2019.

The most recent matchup between these teams occurred during January of this year though – which resulted in another win for the Mavericks, as Doncic exploded for 36 points (13-28 FG), nine rebounds, and 11 assists in a 5-point victory for Dallas.

LaMarcus Aldridge and DeMar DeRozan both chipped in 25+ points apiece on a combined 50% from the field during the Spurs first matchup with the Mavericks this year.

Rudy Gay, Keldon Johnson, and Patty Mills all held their own in the scoring department as well – with each player cracking double-digits on the scoreboard to total a combined 46 points.

San Antonio managed to put up 117 points while shooting 43% from downtown in its first meeting with Dallas, but it still wasn’t enough to edge the Mavericks' 122 points on 48% from the floor.

The total has stayed ‘under’ in three of the last five Spurs games, giving the ‘over’ a record of 14-18 on the year now, which ranks 25th across the league in that department.

Kristaps Porzingis spent the first month of Dallas’ 2020-21 campaign recovering from knee surgery, which at first did not appear to be significantly hampering the Mavericks offensively.

Dallas’ inefficiencies on both ends of the floor became apparent rather quickly though – considering the Mavericks sat at 8-12 SU prior to the start of February, while scoring 112 points or less in 13 of those 20 games.

The Mavericks have scored more than 112 points in 9 of 14 games since February kicked off though, which has led them on 10-4 SU run during that timeframe, positioning themselves in an ideal spot to claim one of the final playoff bids in the Western Conference in the second half of this season.

While the Spurs, as a unit, went into a bit of a rough patch as the All-Star Break approached, DeRozan always remained a consistent offensive contributor – tallying 20 or more points in seven of his last 10 games before hitting the midway point of the season.

During San Antonio’s first matchup with Dallas this season, DeRozan paced the Spurs in scoring with 29 points, and 13 of those coming from the free-point line. I’ll back DeRozan to go ‘over’ his total points number here.

After getting off to a rocky 9-14 SU start to the 2020-21 season, the Mavericks finally gained some momentum heading into the All-Star Break – closing out the first half of the season on a 9-2 SU run to pull them into 8th place in the Western Conference with their current record sitting at 18-16.

While the Spurs on the other hand, are partaking in a rollercoaster ride of a season that seems destined to continue – having alternated wins and losses in six consecutive games (3-3 SU), and their only victories during that span coming against the Knicks, Pelicans, and Hornets.

It took Dallas a little while to get the offense rolling this year without Porzingis in the lineup, but now that the Unicorn is back at full-strength, the Mavericks are back to being that fun, streaky team we all fell in love with last season.

I’ll back Dallas to keep its current streak alive and win a fourth straight here.