The Los Angeles Clippers are ready to get back on the court after a week off for the All-Star Break. They lost six of their last nine before the break and three straight games to end the first half of the season on a sour note.

Still, they are in fourth place in the Western Conference, and that has the Clips in a lot better position than the Golden State Warriors over the second half of the season. The Warriors are currently a half-game behind the Dallas Mavericks for the No. 8 seed. 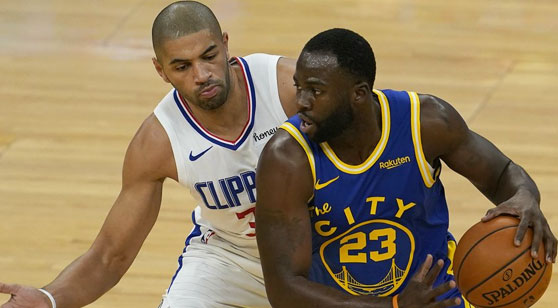 The Clippers and Warriors split a pair of games earlier this season at the Chase Center in San Francisco. (AP)

This will be the third meeting between these Pacific Division rivals and first in Los Angeles. Both previous games were in the Bay Area. The first game between these teams ended in a 108-101 Clippers’ win as Stephen Curry had a rough night shooting. Curry went 5-17 from the field and the Warriors could only make 26.7 percent of their threes.

Golden State fared better in the second game with Curry playing much better in a 115-105 win. This year’s 3-Point Contest winner went 13 of 24 from the floor for a game-high 38 points and tacked on 11 assists.

The Clippers put a stop to Utah’s winning streak three weeks ago, but it’s been downhill for the team since that point. They fell to Brooklyn in a potential NBA Finals preview, and then they were hammered on the road by Memphis later in the week.

The last week of the first half of the season was the nadir for this team though. The Clippers dropped three games in a row for the first time this season with losses to the Bucks, Celtics, and Wizards.

Paul George didn’t play in last Thursday’s 119-117 loss to Washington. The Clippers were hoping they could win without him, but Nicolas Batum and Serge Ibaka were continually picked on underneath. Batum and Ibaka combined to go 2-12 from the floor and both players finished with a -20+ point differential.

Golden State also lost three straight games before the All-Star Break. The Warriors won three consecutive games prior to that slump with wins over the Knicks, Pacers, and Hornets, but they did not fare as well on their short road trip against Western Conference opponents. They lost to the Lakers and Suns by double digits, and they were edged by two points in Portland.

Both Curry and Kelly Oubre, Jr. sat out of last Thursday’s 120-98 loss to Phoenix. Golden State could only muster 98 points without its top two guards, and the Warriors were outrebounded by 12 boards. Seven Phoenix players ended up with double digits in points in the win.

Curry could pass Ray Allen as the NBA’s career three-point leader next season. He is still shooting the lights out at a prodigious rate, and he is one of the league’s leading scorers at 29.7 PPG.

Curry is knocking down 41.1 percent of his triples as the best perimeter shooter in the NBA, and he is showing no signs of decline after suffering a serious injury last season. His 6.3 APG are the second-most on the team too.