Atlanta is in the middle of a two-week road trip. The Hawks have already faced both Los Angeles teams and Sacramento, and they will face four more Western Conference teams before returning home.

They will hit the halfway point of their trip on Friday night when they take on the Golden State Warriors. Atlanta will host Golden State in its first game back home next Sunday night too. 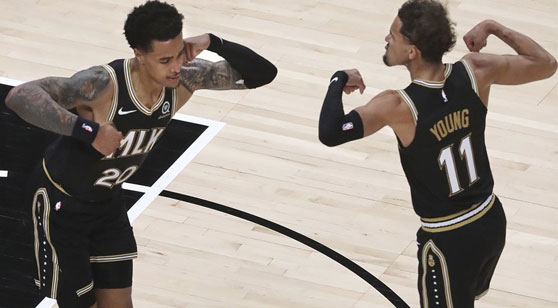 The Hawks have lost two straight games since an eight-game winning streak as they face Golden State. (AP)

Golden State has hit a rough patch over the last month. The Warriors have dropped eight of their last 11 games to move under .500, putting them in trouble of missing out on the playoffs again.

To make matters worse, Stephen Curry has been out with a bruised tailbone for the last week and is expected to miss one more week.

Their first win after the All-Star Break came against Utah. They were hammered by the Lakers the following night before picking up consecutive road wins against Houston and Memphis. However, they have lost their three most recent games to the Grizzlies, Sixers, and Kings.

The Warriors were dismantled by the Kings, 141-119 in Sacramento on Thursday night. They didn’t have Curry or Draymond Green, but the real issue was the lack of defense.

De’Aaron Fox roasted Golden State for 44 points, and current Rookie of the Year frontrunner Tyrese Haliburton had 21 points. Andrew Wiggins led the Warriors with 26 points in the defeat.

Atlanta has emerged as a legitimate playoff contender this season. The Hawks were 14-20 at the end of February, but they won eight straight games to wedge their way into the crowded Eastern Conference picture.

Atlanta needs to keep playing well though, as there are currently six teams within two games of each other in the East.

The Hawks have lost their last two games headed into Friday night’s clash with the Warriors.

Atlanta gritted out a victory over the Lakers in the first game of its eight-game road trip, but the Hawks fell to the Clippers and Kings on Monday and Wednesday night.

Fox had another monster game for the Kings, leading all scorers with 37 points on 65% shooting. Trae Young was the leading scorer on the Hawks with 29 points, while Clint Capela had 25 points and 17 rebounds.

Young is the key to Atlanta’s offense. It appeared that Young might be largely known as the answer to a trivia question involving Luka Doncic during his rookie season, but the prolific scorer has developed into an All-Star talent in his own right these past two seasons.

The former University of Oklahoma standout is averaging 25.8 PPG and 9.4 APG. He is making 43.2% of his field goals and 36.3% of his threes as a high-volume scorer, and he is one of the best at getting to the free throw line.

John Collins was seen as a potential mover at the trade deadline, but he stayed in Atlanta when it was all said and done. Collins will be a restricted free agent at the end of the season.

Atlanta didn’t trade Collins, but the Hawks still made a big move at the trade deadline. They dealt veteran guard Rajon Rondo to the Clippers in exchange for three-time NBA Sixth Man of the Year Lou Williams.

Williams hasn’t been as efficient as he usually is off the bench, but he is returning to a city he loves in Atlanta.

Many were expecting the Warriors to deal Kelly Oubre Jr. at the trade deadline, but Golden State stood pat with the veteran swingman. He has been increasingly relied upon with Curry out of the lineup, and he has 43 points on solid shooting numbers over the Warriors’ last two games.

Oubre is making 43.8% of his field goals and 32.6% of his threes this season, so he isn’t the most efficient shooter. However, Golden State has been in need of scoring with Curry and Klay Thompson out, and Green struggling to buy a bucket.

Wiggins has been the Warriors’ top performer with Curry out. Wiggins is averaging 17.9 PPG and 4.7 RPG this season. His shooting numbers are considerably up with more options to take the pressure off him, and he is making 47.1% of his field goals and 38.8% of his threes.

We have seen Wiggins stay around the basket more with Curry sidelined, leading to the former No. 1 overall pick recording eight rebounds in three of his last four games.

Rookie James Wiseman can’t come along fast enough for the Warriors. Golden State is in desperate need of a solid big man that can take over for stretches, especially considering the injury woes of Curry and Thompson over the last two seasons.

Wiseman is playing well with 11.6 PPG and 6.0 RPG, and he is making 51.5% of his field goals. However, he has yet to take the big leap that many were hoping to see as a rookie.

Jordan Poole is averaging 20.2 PPG in March. He has seen much more action since being called up from the G League just before the All-Star Break, and he is shooting 50/40/90 this month.

Golden State will be playing on no rest after losing to Sacramento last night, but Atlanta has only had a day off prior to this game. The Warriors can do just enough to keep it within the number here.