Tom Thibodeau has given New York Knicks’ fans something they haven’t had in a long time - hope. The Knicks appear likely to make their first playoff appearance in eight years, and that’s quite an accomplishment for a franchise that hasn’t had much to celebrate over the last two decades.

New York has won just one playoff series since the 1999-2000 season. The franchise needs to remain relevant with the Brooklyn Nets constructing the team to beat in the Eastern Conference, and the Knicks will face a litmus test on Saturday night when they take on the Milwaukee Bucks. 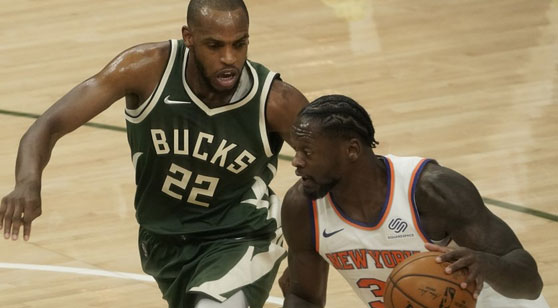 Milwaukee and New York have split a pair of matchups this season as they meet on Saturday. (AP)

Milwaukee needed some time to hit its stride this season. The Bucks were 16-13 after a five-game losing streak in mid-February, and it appeared that this team might slip into the middle of the pack in the Eastern Conference. They have responded over the last five weeks to prove they are still a team to be reckoned with in the East.

The Bucks have won 13 of their last 15 games, besting Philadelphia on the road and the Los Angeles Clippers during that stretch. Milwaukee had won eight straight games before losing to Boston 122-114 on Friday night.

Jayson Tatum went 13 of 18 from the floor for a game-high 34 points in the Celtics’ win. Kemba Walker and Marcus Smart had over 20 points for Boston too, while Milwaukee didn’t have a single player score more than 20 points. Giannis Antetokounmpo was a bit off with 16 points, eight rebounds, and five assists, and Brook Lopez had a rough night.

New York has been hanging around .500 for most of the season. The Knicks are just 9-14 away from Madison Square Garden though, as they have taken advantage of playing in the Big Apple. They have lost five of their last seven road games with the two wins coming against Detroit and Oklahoma City.

One of those losses came against Milwaukee in the Knicks’ first game after the All-Star Break. The Knicks had hammered the Bucks in NYC right after Christmas, but Milwaukee dismantled New York 134-101 two weeks ago. The Bucks hit 57.5% of their field goals and 47.4% of their threes, while Julius Randle had an off night. R.J. Barrett recorded a team-high 22 points for the Knicks.

The Knicks beat the Wizards twice in three days earlier this week. New York hammered Washington 131-113 on Tuesday behind 37 points from Randle, but the Wizards put up more of a fight in a 106-102 loss on Thursday. Bradley Beal and Russell Westbrook combined to go 11-38 from the floor, while Alec Burks came off the bench to lead the Knicks with 27 points.

The Knicks are allowing a league low 104.9 PPG. They rank second in effective field goal percentage, first in shooting percentage, and first in three-point percentage on defense. Thibodeau has thoroughly indoctrinated this team with his defense-first mentality, leading to New York’s success during the season.

Randle is leading the way with 23.0 PPG, 10.8 RPG, and 5.8 APG. Randle has thrived in the Big Apple, largely due to the growth in his perimeter shooting. He had only made more than 28% of his threes once in his career prior to this season, and that was two years ago with New Orleans when he made 34.4% of his treys. Randle is making 42.3% of his triples this year to pace the Knicks with Derrick Rose out.

Second-year guard Barrett has had a decent season too. Barrett was not too impressive as a rookie, but he is averaging 17.5 PPG, 6.2 RPG, and 3.0 APG this campaign. He needs to improve his shooting percentages to become a truly elite player, yet he is having a nice year.

Giannis Antetokounmpo is averaging 28.3 PPG, 11.5 RPG, and 6.4 APG to lead the Bucks this season. The two-time NBA MVP will not win the award this season, but he is putting together another solid year as Milwaukee is surging with the playoffs on the horizon. Antetokounmpo is hitting 55.8% of his field goals this season, yet he is knocking down just 30% of his threes. Boston was able to contain him in his last two outings as Antetokounmpo had just 29 total points.

Khris Middleton is the second-best player on the Bucks. Middleton got off to an electric start this season, but he has since cooled down. He was making over 50% of his field goals and 44% of his threes at the end of January, and his shooting percentages have dipped since that point. He is averaging 20.5 PPG, 6.1 RPG, and 5.4 APG on the year.

Milwaukee swung for the fences with the addition of Jrue Holiday. The Bucks gave up a lot of draft capital to acquire the guard from the Pelicans, and he has posted 15.9 PPG, 4.4 RPG, and 5.1 APG. Holiday is averaging 1.7 steals per game as a solid defender, and he is also making 49.1% of his field goals and 38% of his threes.

The Bucks have the highest-scoring offense in the NBA (119.8 PPG). They rank second in effective field goal percentage, and they are third in three-point percentage and sixth in two-point percentage. They won’t find it easy to score against the best defense in the league though.

It’s going to be tough for the Knicks to get a win here with their injury woes. Milwaukee is at a bit of a disadvantage since the Bucks played last night, but they are the pick despite the large number.