Non-conference NBA will resume on Saturday night with the LA Clippers set to host the Philadelphia 76ers during the lone matchup on NBATV’s nationally televised slate.

The Clippers head into Saturday’s contest as a four-point favorite – marking just the seventh time this season Philadelphia has been listed as an underdog.

While the total for this matchup currently sits at OU 222, which is the first time the ‘over-under’ for a Sixers game has been set above 220 in the last seven days. 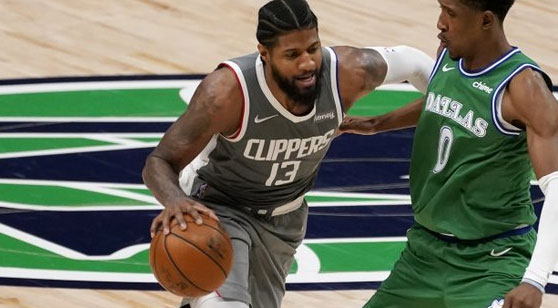 Paul George and the Clippers return home on Saturday night for their first meeting this season against the 76ers. (AP)

The Clippers come into this matchup riding a four-game winning streak SU and ATS – with LA’s most recent defeat coming at the hands of the Mavericks back on March 17th.

Los Angeles’ previous matchup resulted in a 13-point victory over the Spurs, as the Clippers have now won each of their last four games by nine or more points.

The Sixers also head into Saturday’s contest riding a four-game winning streak – with Philadelphia’s most recent loss coming in an overtime matchup against the Bucks.

Philadelphia’s latest victory came during a meeting with the Lakers on Thursday night, as the Sixers managed to escape with an eight-point win during the absences of Anthony Davis and LeBron James.

Philadelphia and Los Angeles split a pair of matchups during last year’s regular season, with both of those contests occurring prior to the NBA’s shutdown due to the global pandemic.

The first meeting between these teams resulted in a win for the Sixers – as Joel Embiid and Ben Simmons chipped in 26 points apiece on a combined 20-49 from the floor on the way to a seven-point victory for Philadelphia.

While the second matchup between Philadelphia and LA last season ended up in a surprisingly narrow victory for the Clippers – as Kawhi Leonard and company barely escaped with a home-win during a contest Embiid and Simmons both did not participate in.

Philadelphia head coach, Doc Rivers, will finally have his first matchup against the team he was at the helm of last season this Saturday, but it won’t be his first time coaching in the Staples Center since his departure from LA – considering the Sixers just beat the Lakers in their shared-arena on Thursday night.

In previous seasons, whenever Joel Embiid would be forced to sit out for his various injuries, the Sixers would fall apart and start losing a bunch of games. Since the big man’s most recent absence though, Philadelphia is 7-1 SU and 6-1-1 ATS – with the Sixers’ only loss against the number during that time frame coming in a three-point victory over the Knicks.

The ‘over’ still owns a slight advantage in Sixers’ games so far this year – currently sitting at 23-22 since Rivers has taken over as head coach. Make note though, following Embiid’s most recent injury, the total has stayed under in six of the last eight matchups containing Philadelphia.

The Clippers head into this matchup bearing a crowded injury report – with Patrick Beverley, Serge Ibaka, Marcus Morris, and Kawhi Leonard all taking up space on the list with their respected issues.

It will be important to monitor the statuses of all these guys as tip-off approaches, including newly acquired Rajon Rondo, as the time frame of his Clippers-debut still remains up in the air.

The ‘over’ is 26-19-1 in games containing the Clippers so far this year, but it appears LA has experienced a change of pace in their recent matchups – with the total staying under in four of the Clippers last six games.

Seth Curry returned from a three-game absence during Philadelphia’s victory over the Lakers on Thursday night – scoring 19 points on 7-13 from the floor in an 8-point road-win for the Sixers.

Including Thursday’s game, Curry has now scored 12 or more points in six of the last seven games he has participated in – with his lowest scoring output during that span being his 10-point performance in the game he suffered his most recent injury in.

I’ll back Curry to have another decent game on the scoreboard against the Clippers here.

The total has now stayed under in five of the last six games containing Philadelphia – with only two of the matchups during this span carrying an ‘over-under’ greater than 220. While the Clippers enter this matchup with the under cashing in four of their last six games, despite the over sitting at 26-19-1 in LAC games so far this year.

I’ll take the under here, as we should see a high-intensity defensive matchup in Doc Rivers’ return to LA on Saturday night.