The oddsmakers are predicting that the scoreboard operators will be in for a busy night on Friday in Portland. The Trail Blazers and Milwaukee Bucks are two of the highest scoring teams in the league, and neither team is particularly great on defense.

Milwaukee has not been good away from home with a 12-10 record outside of the Fiserv Forum, but the Bucks are favored to beat the Trail Blazers. 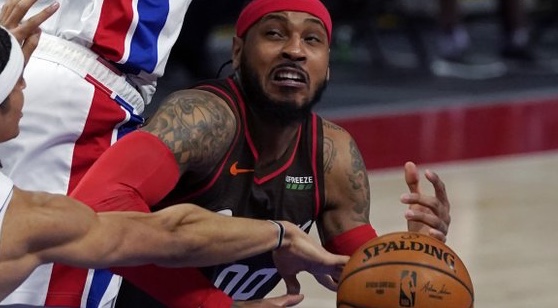 Portland has covered 24 games this season, but are just 9-14 on the ATS when playing inside the Moda Center. (AP)

Portland is defined by its perimeter shooting, so the Blazers are a streaky team. They have gone on runs and droughts throughout the season. The Blazers won five in a row and then lost four straight games before winning another three in a row during a one-month stretch, and they have won seven of their last nine games.

The hosts bring a four-game winning streak into Friday night. Portland won every game on its most recent Eastern Conference road trip, pushing past Miami and Orlando on consecutive nights last week. The Blazers went on to beat Toronto in Tampa on Sunday before heading north to face Detroit two nights ago.

Detroit was no match for Portland. The Trail Blazers hammered the Pistons 124-101 as Damian Lillard and C.J. McCollum each made more than 50% of their three-pointers while combining for 57 points. Jerami Grant led Detroit with 30 points, but it wasn’t enough.

Milwaukee is currently 1-1 through two games of its six-game West Coast road trip. The Bucks had lost three in a row prior to their win over the Los Angeles Lakers on Wednesday night. That came on the heels of the team’s best run so far this season, so Milwaukee is hoping to be back in that form.

They had little trouble with the short-handed Lakers despite a slow start in the first quarter. Milwaukee outscored LA by 20 points in the second and third quarter, eventually covering the number with a 112-97 win. Giannis Antetokounmpo was the only player to record a double-double, while Jrue Holiday led all scorers with 28 points on 11 of 16 shooting.

Antetokuonmpo is one of the league’s elite players. He is averaging 28.3 PPG, 11.4 RPG, and 6.3 APG on the year. There might not be a better offensive player in the league, as he is making 55.7% of his field goals and gets to the free throw line almost 10 times a game. His three-point shooting (30.7%) does leave something to be desired though.

When the Bucks sent a boatload of draft picks down the Mississippi to land Jrue Holiday from New Orleans, they were hoping to get the elite guard they needed to finally win the East. Holiday was seen as an improvement over Eric Bledsoe, and he has proven to be a solid addition. He is making 50.0% of his field goals, and his shooting over the last two months has been lights out.

Meanwhile, Khris Middleton seems to be backsliding slightly with his recent play. Middleton is making 49.1% of his field goals and 43.6% of his threes on the season as Milwaukee’s second leading scorer. However, he has not topped 20 points in any of the Bucks’ previous three games. His shooting percentages have taken a dip too as March was his least efficient month.

Portland has been arguably the most injury prone team in the NBA this season. However, the Blazers are almost fully healthy now as Zach Collins is no longer in a cast and might return before the end of the campaign. That would make this team even more dangerous as Portland doesn’t have a lot of quality big men.

Jusuf Nurkic returned to the lineup last week. The center has been on a minutes’ cap in his three games back, averaging under 20 MPG. He doesn’t appear to be 100% after more than two months off, but Portland is happy to have its best big man back in the rotation. Jokic is making 49.2% of his field goals and is averaging 11.7 PPG and 8.0 RPG in his career.

C.J. McCollum returned to the lineup shortly after the All-Star Break. McCollum had been sidelined for nearly two months due to injury, putting a lot of stress on Damian Lillard without three starters. He hasn’t been as efficient of a shooter since his return, making just 39.6% of his field goals and 34.9% of his threes, but he is averaging 24.2 PPG and shooting 40.7% from beyond the arc this season.

There’s no denying Lillard is the star of this team. Lillard took the Blazers to the Western Conference Finals just two years ago, and he is capable of taking over a game with his hot hand. He is probably the player most likely to score 50 points on any given night in this league.

The pride of Weber State is making 44.7% of his field goals and 37.9% of his threes this year. He gets to the line almost as often as anyone else in the NBA, leading to Lillard averaging 29.8 PPG. Lillard is also averaging 7.8 APG as one of the best set-up men.

Milwaukee hammered Portland at home in mid-January. The Bucks beat the Blazers 134-106 as the bench made a huge difference. Bobby Portis had 21 points and posted a +31 in the win. Portis will not be available on Friday, and that’s a significant loss considering Portland’s lack of a real frontcourt. The Blazers can take advantage and run smaller lineups, and Nurkic might be a real difference maker.