Non-conference NBA action will resume on Thursday night with the Mavericks set to host the Bucks at 9:00 eastern time in Dallas, Texas.

Dallas heads into Thursday’s matchup as a 1.5-point favorite over the visiting Bucks – marking just the third contest that Milwaukee has been listed as an underdog in this year. 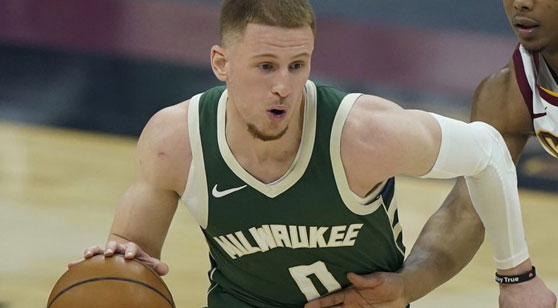 The Bucks continue their road swing in Dallas on Wednesday looking to bounce back from a loss at Golden State. (AP)

The Mavericks enter Thursday having won seven of their last 10 games – with the ‘under” also cashing in seven of the events during that timeframe.

Dallas had a five-game winning streak snapped by the Rockets on Wednesday night though – as 23 points apiece from Luka Doncic and Kristaps Porzingis still wasn’t enough to push the Mavericks over the century mark during their 9-point loss in Houston.

The Bucks had a three-game winning streak of their own snapped by Golden State in their most recent matchup – as Milwaukee entered the fourth quarter of the contest holding onto a five-point lead, despite Giannis Antetokounmpo sitting out due to a minor knee injury.

The Warriors were able to mount a comeback in the final stanza though, as Stephen Curry and Kelly Oubre combined for 21 points on 7 of 10 from the field to steal a one-point victory for Golden State.

The Mavericks reigned victorious during both of their regular season matchups against Milwaukee last year – with those two events containing an averaging of 252 total points scored in them, which is much higher than the total set for Wednesday’s tilt.

The most recent meeting between these teams was a relatively low-scoring affair that resulted in a win for the Bucks though – as Giannis teamed up with Khris Middleton for 56 points on 22 of 41 from the field on the way to a narrow, three-point victory for Milwaukee back in January of this year.

Antetokounmpo has sat out during three of the last seven Bucks’ games, and in turn, Milwaukee’s record has suffered over that stretch – posting a record of 3-4 SU and 2-5 ATS across their most recent stint.

Prior to that seven-game stretch though, the Bucks were playing some of the best basketball we had seen from them all year – with Milwaukee entering its matchup against the Celtics on March 26th boasting wins in 13 of their last 14 games.

The total has gone 'over' in back-to-back Bucks’ games now, which is indicative of the season Milwaukee has had so far this year – considering the ‘over’ is 30-19-1 during their current campaign.

Dallas has played solid basketball over the last month or so – with the Mavericks owning a record of 11-6 following the conclusion of February.

Doncic and company appear to have hit a mid-season lull as they head into Thursday’s matchup though, considering Dallas has posted a record of 3-5 SU across their last eight games – which includes losses to the Knicks, Celtics, Warriors, and Rockets during that span.

The total has stayed 'under' in seven of the last eight Mavericks’ games, which is consistent with what we have seen from Dallas in the pace department this season – with the ‘over’ sitting at a 20-30 clip over the course of their current campaign.

Jrue Holiday has really cranked up the intensity in the scoring department over Milwaukee’s most recent stretch of games – having scored 24 or more points in four of his last five contests.

Holiday's lowest scoring output across that stretch is a 22-point performance during the Bucks blowout victory over Portland this past Friday.

I’ll back Holiday to keep things going against the Mavericks here – especially if Antetokounmpo is unable to participate in this event.

Dallas heads into Thursday’s contest following a loss to the Rockets less than 24 hours ago, which was the Mavericks’ first defeat since they squared off with the Pelicans back on March 27th.

While the Bucks enter this matchup coming off losses in four of their last seven games, and the forecast continues to look gloomy for them with Antetokounmpo now being downgraded to ‘doubtful’ ahead of Thursday’s tilt.

I’ll take the points with Dallas at home here, as Milwaukee has proven to be quite unreliable without Giannis on the floor this season.