Non-conference NBA action will resume on Friday night with the Sixers set to host the Clippers during the first matchup on ESPN’s nationally televised slate.

Philadelphia heads into Friday’s contest as a two-point favorite over the visiting Clippers – marking just the second matchup since the start of March that Los Angeles has been listed as an underdog.

While the total for this event currently sits at OU 226.5, which is the third time since the start of April that the over-under for a matchup containing the Clippers has been set above 225 (nine-game window). 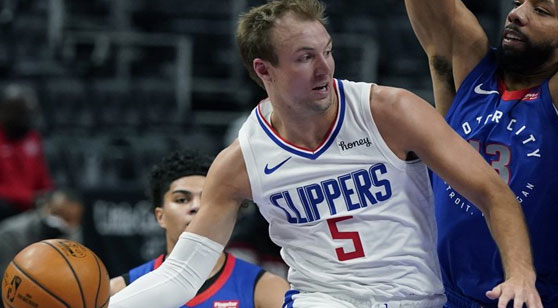 Philadelphia enters Friday’s affair following an impressive stretch of recent results – with the Sixers boasting a record of 4-1 across their last five games, which includes victories over the Mavericks, Celtics, and Nets during that period.

The Sixers battled Brooklyn during the absences of Kevin Durant and James Harden this past Wednesday, which resulted in a relatively easy win for Philadelphia – as Joel Embiid and company cruised to a victory in a contest that they led by as many as 22 points in.

On the other hand, Los Angeles heads into Friday’s contest riding a seven-game winning streak – with the Clippers most recent loss coming in a matchup against Denver back on the first of April.

Kawhi Leonard and Paul George were both held out due to minor injury concerns during the Clippers latest victory over Detroit this past Wednesday.

In that matchup, Tyronn Lue’s squad clearly felt the magnitude that the absences of L.A.’s superstars bring to the table – considering the Clippers tallied just 100 points in a meeting with Detroit that was separated a narrow, two-point margin.

Somehow, Los Angeles still managed to escape with the win though – as Reggie Jackson willed his team to a one-possession victory over the Pistons by scoring 29 of the Clippers’ 100 points at a 50% clip over the course of the contest.

Philadelphia and Los Angeles split a pair of matchups during last year’s regular season – with the Sixers winning the first of those matchups in a low-scoring defensive battle, and the Clippers winning the second in a 136-130 shootout.

The most recent showdown between these teams took place a few weeks ago though, which resulted in a double-digit victory for the Clippers – as Terance Mann chipped in 23 points on 10-12 from the field, to go along with solid performances from both Leonard (28 points) and George (24 points).

Tobias Harris led the way in the scoring department for the Sixers during that matchup – racking up 29 points on 13-19 from the field over the course of Philadelphia’s 10-point loss.

Make note though, Harris will have much more help at that end of the floor the second time around – considering Embiid (29.8 ppg.) sat out with an injury during the first matchup between these teams.

The Clippers enter Friday’s contest having won eight of their last 10 games – currently giving Los Angeles the third-best record in the Western Conference, which falls just three games behind the league-leading Jazz.

This year’s Clippers' squad has played at a much faster pace than last year’s team did – which has resulted in the over cashing at a 32-24-1 clip in matchups containing Los Angeles so far this season.

Make note though, that trend seems to have fizzled out across L.A.’s most recent stretch of matchups – considering the total has stayed 'under' in five of the last nine Clippers’ games.

Now that Embiid is back in the lineup and appears to be playing at full-strength, the Sixers are back to winning big games in dominating fashion – which is a stretch highlighted by back-to-back 35-point performances for Philadelphia’s big man during victories over playoff-caliber opponents this past week (Brooklyn, Dallas).

Philadelphia consistently leaned towards the ‘over’ for the first half of the current season, as the new-look Sixers threw a wrench into the odds-making process early on this year – leading to slight skew in high-scoring results.

Since the start of April though, Philadelphia seems to have a slower approach to its game plan – which has resulted in the total staying under in six of eight Sixers’ games since the latest calendar-turn.

"The Process" scored 39 points during Philadelphia’s victory over the Nets on Wednesday night – accounting for Embiid’s second straight performance of 35 points or more in ESPN’s nationally televised spotlight (Dallas, Brooklyn).

Prior to the knee injury he suffered back in March, Embiid had scored 30 or more points in 13 of his last 18 games – placing him right at the forefront of the MVP-race at the time.

I’ll back Embiid to have another big night on the scoreboard in Philadelphia’s third consecutive nationally televised event.

The Sixers head into Friday having won five of seven games since Embiid’s return from injury – with Philadelphia’s only two losses during that span coming in a matchup against New Orleans that Embiid scored just 14 points in, and a matchup against Memphis that the big man did participate in.

While the Clippers head into this matchup riding a seven-game winning streak – with over half of L.A.’s victories across that stretch coming against teams that currently own a losing record.

I’ll lay the points with Philadelphia here, as the Sixers have been nearly unbeatable in the Wells Fargo Center this season – currently boasting a record of 21-5 in their own building over the course of their current campaign.