The Memphis Grizzlies (29-27) play the fourth contest of a seven-game road trip against the Los Angeles Clippers (41-19) at Staples Center on Thursday at 10 p.m. ET. The game is nationally televised on NBATV.

The Grizzlies have won two of the first three games on the trip, including a heartbreaker last time out against the Nuggets in Denver on Monday night. The Clippers picked up a 113-112 win over the Trail Blazers in Portland on Tuesday, failing to cover as favorites.

The Clippers head into this one as favorites by just five points, which might be a bit surprising on the surface. Los Angeles has won six straight on its home floor dating back to a 101-94 setback on April 1 against the Nuggets.

The Grizzlies might have lost last time out, but they covered, and they are an impressive 5-0 ATS across the past five outings. Memphis has rolled up impressive offensive totals on the road, dropping 126, 128 and 137 so far on the trip, hitting the OVER in each outing. 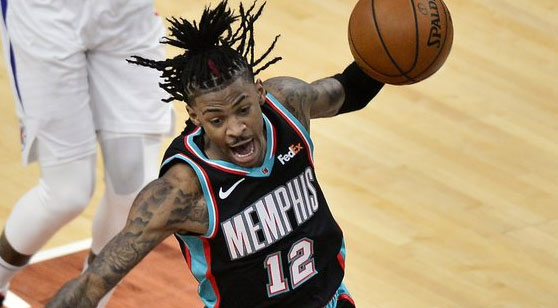 Ja Morant and the Grizzlies continue their road trip against the Clippers seeking their sixth consecutive cover. (AP)

The Grizzlies were edged 139-137 in an overtime shootout in Denver, covering a 7.5-point number as the OVER (226) easily connected. In fact, there were 187 points on the board through three quarters, so chances are the OVER was going to cash very quickly in the fourth quarter.

Memphis has won three of the past five outings, but they have covered five in a row. They have been cover kings for a while, too, going 15-3 ATS across the past 18 games dating back to March 20.

As mentioned above, they have averaged 130.3 PPG across the first three games on the road trip, hitting the OVER in each. The OVER is 4-0 in the past four for Memphis, 8-1 across the past nine outings, and 13-4 over the previous 17 outings.

These two teams split a back-to-back set in Grind City Feb. 25-26, and they blew each other out on consecutive nights. The Grizzlies rolled up a 28-point win in the opener as eight-point underdogs. All five starters finished with double-digit points, with Jonas Valanciunas going for 16 points and 15 rebounds. Tyus Jones had 20 points off the bench, too, while hitting 9-of-11 from the field.

In the second game, the Clippers won 119-99 as 7.5-point favorites as the UNDER hit for the second straight outing. L.A. had seven scorers with 12 or more points, with Kawhi Leonard going bonkers with 30 points, nine rebounds, seven assists and a blocked shot with three triples and an 11-for-11 night from the charity stripe.

The Grizzlies have been rolling up huge offensive totals lately, and a lot of the games have been as underdogs. In fact, they're 7-1 ATS in the past eight on the road, and 6-0 ATS in the past six as an underdog, while cashing in four straight as a road 'dog.

Overall, Memphis has covered in 35 of the past 52 games, while going an impressive 4-1 ATS in the past five following a straight-up loss. They'll likely be quite angry after letting one slip away in Denver in overtime last time out.

Memphis has also showed well against some of the better teams in the league, particularly so lately, going 7-0 ATS in the past seven games against teams with a winning overall record.

Memphis has also hit the OVER in four in a row, and the OVER is 5-0 in their past five on the road against teams with a winning home record. The OVER is 5-1 in the past six as a road underdog, too, while hitting in 19 of the past 26 away from home.

The Clippers are playing in the second end of a back-to-back situation after returning home from Portland. That's OK, though, as L.A. is 9-1-1 ATS in the past 11 when playing on no rest. They really seem to excel in back-to-backs.

The Clippers are also 5-1 ATS in the past six at home, while going 7-2-1 ATS across the past 10 games overall. In addition, L.A. is an impressive 6-2-1 ATS in the previous nine as a favorite.

As far as totals are concerned, the trends are a complete contrast to those of the Grizzlies. First off, the UNDER cashed in each of the first two meetings between these teams this season. Secondly, the UNDER is 5-1 in L.A.'s past six on the second end of a back-to-back. However, the OVER is 6-2 in the past eight meetings at Staples Center between these sides.

The biggest news here is that Leonard will be on the shelf for this one, and that has the Grizzlies in tremendous shape catching some points. They beat the Clippers outright in Memphis with Kawhi on the floor, so they certainly are capable of winning this one straight up.

Memphis has been going hog-wild on offense lately, and there is no reason to believe Los Angeles will be able to slow them down. In fact, the best bet on the board might not necessarily be the money line or spread, but the total, particularly the OVER.