Eastern Conference NBA action will resume on Thursday night with the Bucks set to host the Sixers during the first matchup on TNT’s nationally televised slate.

Milwaukee enters Thursday’s contest as a six-point favorite over the visiting Sixers, which is just the second time Philadelphia has been listed as an underdog in since Joel Embiid’s return from his latest injury (BOS -1).

The total for this event currently sits at OU 226.5 – marking the fourth Bucks’ game since the start of April to have an over-under set below 230 (10 games). 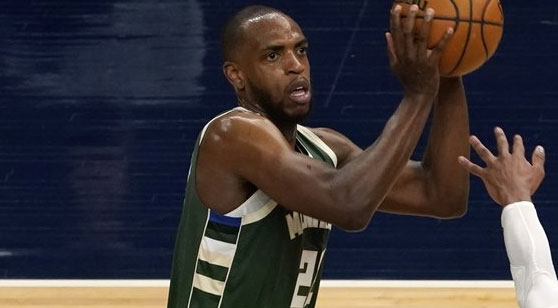 The Bucks look to end a two-game losing streak as they host the 76ers tonight. (AP)

Even though Milwaukee has been favored in six of the last eight games, the Bucks head into Thursday’s contest bearing a record of 3-5 SU across their most recent window of matchups.

Milwaukee’s only victories during that timeframe have come against opponents that share a combined record of 65-109 on the current season (Hawks, Timberwolves, Magic).

Giannis Antetokounmpo went off for 33 points on 12-22 from the field during Milwaukee’s most recent matchup against the Suns this past Monday.

The Greek Freak’s spectacular performance still wasn’t enough to propel the Bucks to a win in that contest though, as Phoenix ended up escaping with an overtime victory behind 20-point performances from four of its starters (Ayton, Bridges, Booker, Paul).

On the other hand, the Sixers come into Thursday following losses in back-to-back matchups. Make note though, Tobias Harris and Ben Simmons did not participate in either of those defeats.

Philadelphia’s most recent loss came at the hands of the Suns on Wednesday night, as Embiid racked up 38 points on 14-23 from the field – and nearly capped off his spectacular performance with a full-court heave at the buzzer that would have sent the game to overtime.

The Bucks have reigned victorious in three of their last four regular season matchups against Philadelphia – with their highest-scoring affair during that span containing a relatively low-total of 230 points.

The most recent meeting between these teams required an additional five minutes of action to determine a winner – as Philadelphia and Milwaukee were deadlocked, 93-93, at the final buzzer of their matchup back in March.

The Bucks ended up running away with the game in overtime though, as Antetokounmpo assertively paved the way to a victory for Milwaukee by posting 10 points on 4-of-4 from the field during the contest’s extra stanza.

Now that Embiid has returned from injury and appears to have his feet back under him, the Sixers are beginning to win games in dominating fashion again – considering Philadelphia has now claimed wins in four of its last six games, with half of those victories coming by 15 points or more.

Philadelphia consistently leaned towards the ‘over’ during the first half of the current season, as the new additions to the Sixers rotation led to slight skew in high-scoring results prior to the All-Star Break (20-16).

Since the start of April though, Philadelphia seems to have a slower approach to its offensive game plan – which has resulted in the total staying 'under' in three of 11 Sixers’ games since the latest calendar-turn.

Antetokounmpo returned from a seven-game injury leave for the Bucks’ matchup against Atlanta last Thursday – as Milwaukee managed to claim its third win against the spread during the former MVP’s most recent stint of absences (3-4 ATS).

Milwaukee has struggled since that matchup though – considering the Bucks head into Thursday after dropping back-to-back games that they were favored in (PHO +3, MEM +8.5).

Betting the ‘over’ in Bucks’ games has been one of the most profitable plays in the Eastern Conference so far this year – with the total going 'over' at a 34-22-1- clip in matchups containing Milwaukee this season.

That trend of high-scoring affairs appears to have fizzled out lately though – considering the total has stayed 'under' in 5 of the last 11 Bucks’ games.

During a period when it is nearly impossible to predict what type of show the Bucks are going to put on display most nights, Jrue Holiday’s contributions to Milwaukee’s passing game are something that can be consistently relied upon.

Holiday heads into Thursday’s matchup having assisted on seven or more baskets in four of his last five games – with his lowest assist-output during that stretch coming in a blowout win over Minnesota that he played less than 26 minutes in.

I’ll back Holiday to have another solid game in the distribution department against his former team here.

Philadelphia currently sits atop the Eastern Conference standings with a record of 39-18, which positions them four games higher than Milwaukee on this year’s playoff totem pole.

Philadelphia heads into Thursday’s contest following losses in back-to-back games, which were both matchups that Harris and Simmons did not participate in.

Prior to Philadelphia’s current two-game skid though, the Sixers boasted wins in five of their last six games – which included impressive victories over the Clippers, Mavericks, and Nets during that timeframe.

I’ll take the Sixers with the points here, as the majority of this contest will likely be played within a 6-point window – potentially leaving a straight-up victory within striking distance for Philadelphia.