Memphis is right in the thick of things in the Western Conference playoff race. The Grizzlies are currently one game over .500, and they would qualify for the play-in tournament if the season were to end today.

However, they want to play their way out of the play-in tournament and catch the Portland Trail Blazers, who are currently the No. 6 seed in the West.

They will get the opportunity to catch the Blazers, as they will meet three times in the next week starting with Friday night’s game in the Rose City. 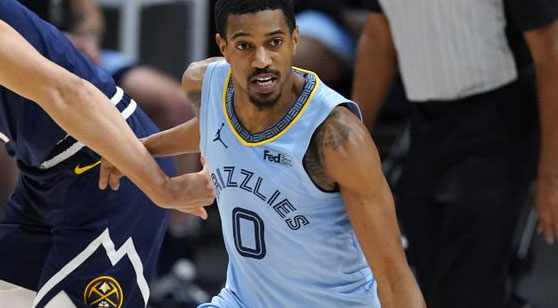 The Grizzlies continue their road trip on Friday night looking to snap their losing streak against the Blazers. (AP)

Portland has lost seven of its last nine games. The Trail Blazers’ only two victories in this stretch were against Detroit and San Antonio, and neither one of those victories was particularly impressive.

However, they have been rather unlucky as four of their last five games have been decided by a single point, and they are just 1-3 in those games.

The Blazers lost 113-112 to the Clippers at home on Tuesday night, and that was followed by a 106-105 loss to the Nuggets the following evening.

Damian Lillard and C.J. McCollum both struggled from beyond the arc against Denver. The two combined to go 4-17 from three-point range, but they were still ahead late until Nikola Jokic made three free throws down the stretch to give the Nuggets the room to win.

This will be the first time that Portland and Memphis have met this season. These teams were originally supposed to play two games in three days in mid-January, but those tilts were called off as Memphis had a COVID outbreak.

Memphis has won seven of its last 12 games, and the Grizzlies could have won 10 of those tilts. They blew a late lead in regulation before losing to the Knicks in overtime two weeks ago, and they fell in double overtime to the Nuggets on Monday.

Additionally, the Grizzlies lost by a single point to Dallas last week, while all seven of their wins have come by at least 11 points in this run.

Their loss to the Clippers on Wednesday night wasn’t close though. Although the Clips didn’t have either Paul George or Kawhi Leonard due to load management, their bench thrived as Luke Kennard led all scorers with 29 points. Ja Morant had 22 points, but the rest of the Grizzlies struggled from the field.

Jaren Jackson Jr. made his long-awaited return to the floor on Wednesday night. Jackson hadn’t played a game since tearing the meniscus in his knee in the Grizzlies’ third game in the Orlando bubble on August 3.

The former Michigan State standout looked rusty off the bench, hitting just 36.4% of his field goals, and he picked up five fouls in 18 minutes. Jackson also provided a needed interior presence though with eight rebounds and four blocks.

Last season’s Rookie of the Year hasn’t had the best sophomore season. Morant is averaging 19.1 PPG and 7.3 APG, but his three-point shooting has been abysmal. Morant is making just 29% of his threes.

While the point guard is making over 50% of his twos and does a nice job of getting to the rim, he must develop a perimeter game given the meta.

Center Jonas Valanciunas has not taken the court for the last week. He sustained a concussion in Saturday’s win over Milwaukee, and he has been sidelined since that point.

It looks like there is a good chance he makes his return on Friday against Portland though. That would be a big boost as he is averaging 17.0 PPG and 12.6 RPG, and he could have his way with Portland’s big men in the paint.

Memphis leads the league in points in the paint. Nearly half (56.2 PPG) of Memphis’ points (113.6 PPG) come in the paint, as these guards are good at getting to the basket and Valanciunas is an efficient scorer down low.

Lillard missed a few games with a hamstring injury, but he returned to the court on Wednesday night. He didn’t shoot particularly well, yet it’s a huge relief for Portland to have its star player back in uniform.

Lillard leads the Blazers in points (28.6 PPG) and assists (7.6 APG). The multiple time All-Star is one of the league’s best at getting to the free throw line (7.4 FTA per game), and he is knocking down a career-high 92.6% of his free throws on the year.

McCollum is averaging 23.2 PPG, but he is making less than 35% of his threes over the last two months. He is really struggling from the free throw line in April too, hitting just 60.9% of his freebies.

Portland’s big men can be dangerous on the offensive end. Enes Kanter is averaging 11.9 PPG and 11.6 RPG, while Jusuf Nurkic is averaging 9.3 PPG and 7.4 RPG.

However, Nurkic has not been an efficient shooter, and both players are subpar on the defensive end.

That has been one of the biggest issues for the Blazers this season. They rank in the bottom five in opponent shooting percentage, largely because opponents are making 54.9% of their two-pointers against this team. Conversely, Portland is making just 50.6% of its twos as a team.

If Valanciunas is given the green light, Memphis is a great pick as a short road underdog. The Grizzlies match up well with the Blazers when he is in the rotation.