Eastern Conference NBA action will resume on Saturday afternoon with the Bucks set to host the Sixers during the final matchup on ESPN’s nationally televised slate. So, VI is getting you ready with a variety of betting resources to help handicap all the weekend’s top contests.

Milwaukee enters Saturday’s matchup as a seven-point favorite over the visiting Sixers – marking just the fourth time Philadelphia has been listed as an underdog in since the start of April (13 games).

The total for this event currently sits at OU 231.5, which positions the over-under bar north of 230 in five of the last six Bucks’ games. 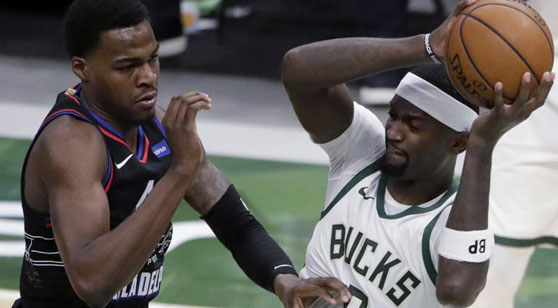 The Bucks seek their third win over the 76ers this season when the teams meet on Saturday at Fiserv Forum. (AP)

Even though Milwaukee has been favored in seven of the last nine contests, the Bucks head into Saturday’s matchup owning a record of 4-5 SU across their latest nine-game window – with only one of Milwaukee’s victories during that timeframe coming against a squad owning a winning record (Philadelphia).

On the other hand, Philadelphia has been down the gauntlet during their latest six-game window – having consecutively matched up with the Mavericks, Warriors, Nets, Clippers, Suns, and Bucks across that stretch, while still managing to pull out victories half of those games without Tobias Harris and Ben Simmons in the lineup.

The Bucks have reigned victorious in four straight regular season matchups against Philadelphia – with three of the contests during that span staying under the total set for Saturday’s affair, and one going over that mark (OU 231.5).

The Bucks’ most recent victory over Philadelphia came just a few days ago though, as Milwaukee managed to bang home 20-40 three-point attempts during the absences of Harris and Simmons – which resulted in a seven-point win and cover for Giannis Antetokounmpo and company.

Despite Embiid returning from injury and beginning to string together spectacular performances again, Philadelphia is starting to lose its grip on the Eastern Conference crown – considering the Sixers have now lost three straight games, and now trail Brooklyn by half-a-game for the top spot in their division.

The Sixers consistently leaned towards the ‘over’ during the first half of the current season, as the new additions to Philadelphia’s rotation led to slight skew in high-scoring results prior to this year’s All-Star Break.

Since the onset of April though, Philadelphia seems to be prioritizing a slowed down offensive approach – which has resulted in the total staying under in eight of 12 games since the latest calendar-turn.

Antetokounmpo returned from a seven-game injury leave for the Bucks’ matchup against Atlanta back on April 15th – as Milwaukee managed to claim its third consecutive win against the spread to cap off the former MVP’s most recent stint of absences (3-4 ATS).

Milwaukee seems to have fallen off the wagon since that matchup though – considering the Bucks head into Saturday following losses in two of their last three games, despite being favored in all those contests.

Betting the ‘over’ in Bucks’ games has been the most profitable play on the over-under in the Eastern Conference so far this year – with the total going over at a 35-22-1- clip in matchups containing Milwaukee this season, which only trails the Pelicans in that department (39-20).

That trend of high-scoring affairs appears to have gained steam since Antetokounmpo returned from his most recent injury too – considering the total has gone over in three of four games since the Greek Freak resurfaced in Milwaukee’s lineup.

It feels like a broken record sometimes, but during a period when consistency comes at an absolute premium, Jrue Holiday’s contributions to Milwaukee’s passing game have been a facet of production that can be consistently relied upon.

Holiday heads into Saturday’s contest having assisted on seven or more baskets in five of his last six outings – which includes his 11-assist performance against Philadelphia this past Thursday. I’ll back Holiday to have another well-rounded performance against his former team here.

If Embiid is unable to participate in Saturday’s matchup, then all bets are off – considering Simmons has already been ruled out for this affair with an illness.

Assuming Embiid plays though, I think the best bet is to hop on the Sixers here. Philadelphia enters Saturday after splitting its last six games 3-3 against some of the league’s premier talent – despite the absences of Simmons and Harris.

While the Bucks head into this matchup following losses in two of their last three games – despite being favored in all those contests by three points or more. I’ll take Philadelphia with the points here, as I expect Embiid and company to ramp up the intensity in an attempt to avoid a third straight loss at the hands of the Bucks – which should lead to a competitive game, and maybe even a victory for the Sixers.