Non-conference NBA action will resume on Monday night with the Knicks set to host the Suns during the first matchup on NBATV’s nationally televised slate.

Phoenix enters Monday’s contest as a two-point favorite over the homestanding Knicks, which is the tenth time New York has been listed as an underdog since the start of April (14 games).

The total for this event currently sits at OU 215.5 – marking the lowest over-under set for a Suns’ game since they matched up with Miami back on March 23rd (U 213.5). 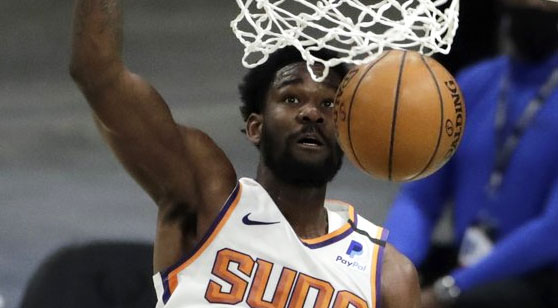 The Suns wrap up their road trip on Monday night as they look to end a two-game slide against the Knicks. (AP)

The Knicks head into Monday riding a nine-game winning streak – despite being favored in just three of the victories during their current run.

That winning streak appeared to be in jeopardy during New York’s most recent affair against the Raptors on Saturday afternoon – as the Knicks clung onto a five-point lead over Toronto at the start of the fourth quarter during that contest.

New York ramped up the intensity on defense down the stretch of that matchup though, which resulted in the Knicks winning the fourth stanza of the contest by a 12-point margin – leading to a fourth straight double-digit victory for Julius Randle and company.

On the other hand, the Suns enter Monday’s contest after splitting their last four games straight-up and against the spread (2-2).

Under most circumstances, Phoenix’ latest stretch of contests would be considered disappointing or underwhelming – but I would advise laying off the Suns’ slander for the time being.

The Suns currently find themselves in the midst of a grueling Eastern Conference road trip, having consecutively matched up with Philadelphia, Milwaukee, Brooklyn, and Boston away from Phoenix over the last seven days.

Posting a record of 2-2 during that time period isn’t impressive by any standards, but laying just two points in a matchup against the Knicks seems to be disrespectful to what Phoenix has accomplished this season.

Phoenix swept a pair of matchups from New York during last year’s regular season – with both of those contests going over the total set for Monday’s affair (OU 215.5).

Devin Booker torched the Knicks for 38 points on 14-of-27 from the field during the first meeting between these teams last season, as the Suns managed to escape with an eight-point victory in a contest that they trailed by double-digits.

The latest matchup between these teams was lopsided from the shoot though – as Phoenix ended up running away with a 23-point road-victory in a contest three different Suns’ players scored 25+ in (Rubio, Ayton, Booker).

The Suns enter Monday’s contest having won six of their last nine games – currently giving Phoenix the second-best record in the NBA, which falls just two games behind the league-leading Jazz.

Betting the total in Suns’ games has been a roller-coaster ride this season – with the ‘over’ cashing in roughly 52% of matchups containing Phoenix so far this year, which ranks 12th across the league in that department.

Make note though, there has been some newfound consistency in scoring-volume during Phoenix’ most recent stretch of contests – considering the total has gone 'over' in 11 of the last 15 Suns’ games.

The Knicks are 10-3 SU and 12-1 ATS since the start of April, with New York’s only losses during that span coming in tough matchups against the Celtics, Nets, and Mavericks – which are all teams comfortably within playoff contention.

Betting the ‘under’ in Knicks’ games has been one of the most consistent plays across the league this year – with the total going 'over' at a 27-34 clip in matchups containing New York so far this season.

However, the total has gone 'over' in six of the last seven Knicks’ games.

Booker finally snapped his cold-streak during the Suns’ high-scoring affair with Brooklyn on Saturday afternoon – by racking up 36 points on 12-of-24 from the field, while also knocking down four of five three-point attempts in the loss.

Prior to his most recent matchup though, Booker had failed to eclipse 25 points in seven straight outings – with four of his performances during that timeframe falling short of 20 points.

I’ll back Booker to stay under that number again here, in what should be a relatively low-scoring contest against the Knicks.

Obviously, the Knicks are not in charge of orchestrating the league’s schedule, but the nine-game winning streak New York is currently riding has come against a stretch of subpar opponents – with N.Y. boasting wins over the Grizzlies, Raptors (2), Pelicans (2), Hornets, Hawks, and Lakers over their most recent stretch of contests.

On the other side of things, the Suns currently own the second-best record in the NBA at 42-18, which trails the league-leading Jazz by just two games – despite splitting the last four games on their current road trip 2-2.

I’ll lay the points with Phoenix here, as the Suns are the far better team in this matchup – even with tired legs on the second half of a back-to-back.