Western Conference NBA action will resume on Tuesday night with the Warriors set to host the Mavericks during the final matchup on TNT’s nationally televised slate.

Golden State enters Tuesday’s matchup as a 2.5-point favorite over visiting Dallas, which is the third time Golden State has been listed as a favorite across its last three games.

The total for this event currently sits at OU 225 – marking the eighth time in the last nine game that the over-under for a Mavericks’ game has been set below 226. 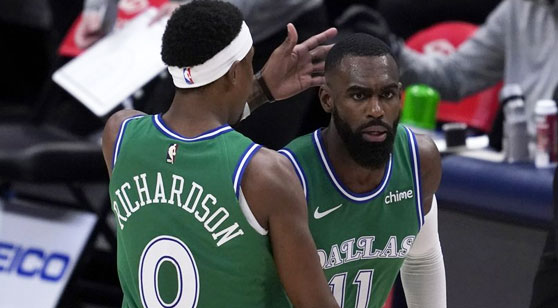 The Mavericks travel to San Francisco with no rest to face the Warriors tonight at Chase Center. (AP)

The Warriors head into Tuesday’s matchup after picking up wins in three of their last four games – with Golden State’s only loss during that timeframe coming in a four-point loss to the Wizards, which was a contest Stephen Curry shot just 2-of-14 from three-point range.

Curry has bounced back emphatically since his rocky performance in the nation’s capital though – having posted 30 or more points in back-to-back outings, while shooting 11-of-23 from beyond the arc across Golden State’s latest two victories.

On the other hand, the Mavericks had a three-game winning streak snapped by Sacramento on Monday night – as Dallas posted a point-differential of -19 with Luka Doncic (24 points, 8-of-20) on the floor during the narrow loss.

Golden State and Dallas have split a pair of matchups during this year’s regular season – with both of those contests going well 'over' the total set for Tuesday’s affair.

The first matchup between these teams resulted in a blowout victory in favor of the Warriors thanks to a career-night from Kelly Oubre Jr. – as the Kansas product went off for 40 points on 14-of-21 from the floor, and 7-of-10 from long-range during Golden State’s 31-point win.

During the second matchup between these teams though, the Mavericks ended up sneaking away with a two-point victory – as Dallas ended up needing every bit of Luka’s 42-point performance to neutralize Curry’s 11-of-19 (57.8%) three-point clip in the narrow home win.

Despite being favored in 12 of 14 games following the conclusion of March, Dallas enters Tuesday’s matchup 8-6 SU and ATS since the start of the current month – which has technically left the Mavericks’ position in this year’s playoffs up for grabs, with Portland, Memphis, San Antonio, and Golden State all breathing down their neck in the Western Conference standings.

Similar to Golden State, siding with the ‘under’ in Mavericks’ games has been one of the most profitable plays in the league this year – with the total sitting at a 25-34 clip in matchups containing Dallas so far this season.

That low-scoring trend seems to be gaining steam as we progress through the month of April too – considering the total has stayed 'under' in nine of the last 14 Mavericks’ games.

With roughly 10 games left in this year’s regular season, the Warriors find themselves in the midst of a heated race for the final playoff spot in the Western Conference – as Golden State, San Antonio, Memphis, and Portland are all separated by less than two games, with only three bids to go around.

Betting the ‘under’ in Warriors’ games has been one of the most profitable plays across the league this year – with the total sitting at a 24-36 clip over the course of Golden State’s current campaign.

That trend of low-scoring affairs has remained prevalent for them in the month of April too – with the total cashing at a 4-9 clip in matchups containing Golden State following the latest calendar turn.

Despite being listed around 20/1 odds at most shops to take home this year’s Most Valuable Player Award, Steph seems to have made his MVP-case loud and clear for Golden State here in the month of April.

The two-time award winner has now scored 32 or more points in 12 of his last 13 games, which includes five performances of 40+ during that span.

During the Warriors’ most recent outing, Curry threw up a casual 37 points on 11-21 from the field over the course of Golden State’s four-point victory against Sacramento.

The Warriors head into Tuesday’s contest boasting wins in three of their last five games – which includes tough victories over Denver, Philadelphia, and Sacramento during that timeframe.

On the flip side, Dallas enters Tuesday 5-5 SU across its last 10-game window. The Mavericks’ most recent stretch of contests is far more underwhelming than Golden State’s though – considering Dallas has been favored in nine of its last 10 games, yet possesses a record of 3-7 ATS during that period.

I’ll take the point with Golden State here, as it feels unwise to be in the business of betting against the best shooter in the world while he is steadfast on his current mission.