The Memphis Grizzlies (31-29) host the Portland Trail Blazers (33-28) on Wednesday night at 9 p.m. ET at FedEx Forum in a key Western Conference battle between two teams in the No. 7 and No. 8 spot in the playoff chase.

The Grizzlies were hammered 120-96 last time on Monday in the Mile High City, splashing cold water on their recent two-game win sweep in a home-and-home against the Blazers in Portland on Thursday and Sunday. The Blazers, meanwhile, bounced back 133-112 in Indiana to kick off the road trip to cover a six-point number.

The Grizzlies find themselves as a favorite by just one bucket. They look to tap into the success they had in Portland last week, sweeping a back-to-back set in Rip City as 3.5-point underdogs in both games. They won the first meeting 130-128 on April 23, and 120-113 on April 25. Memphis is 8-0 ATS in the past eight as an underdog dating back to March 27 in Utah.

The Trail Blazers are looking to carry over their momentum from the win against the Pacers, as they had dropped five in a row while going 2-3 ATS from April 18-25. The OVER/UNDER has alternated across the past six outings for the Blazers, too. 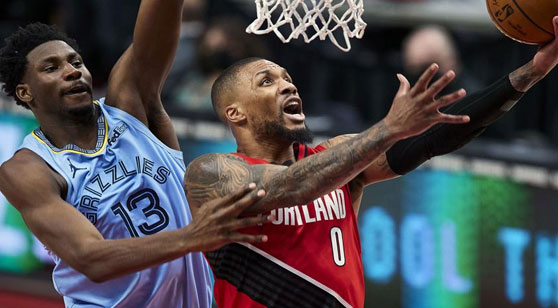 The Trail Blazers play with double-revenge on Wednesday as they face the Grizzlies for the third time in five nights. (AP)

The Grizz hit just 42% from the field in Monday's 120-96 setback in Denver. And that includes Ja Morant's 10-of-15 night, as well as Jonas Valanciunas and his 6-of-9 performance. Those two are the only ones who showed up. Morant ended up with 27 points, six rebounds and six assists with just three turnovers.

The Blazers exploded for 73 points in the first half in Indiana, leading by 11 points. They stepped on the accelerator in the second half, outscoring the Pacers 40-16 in the third quarter to take a 113-78 lead and they never looked back.

Portland had seven players in double digits, with Anfernee Simons rolling for 27 points, including nine three-pointers in 24 minutes off the bench. Damian Lillard was good for 23 points, six assists and four rebounds with four triples. Robert Covington also had three treys, and they finished 20-of-35 (57%) from behind the arc.

Valanciunas racked up 21 points with 10 rebounds and three triples in 30 minutes in Sunday's win against the Blazers, while Morant was good for 28 points and eight boards while hitting three treys as well. They ended up with five players with 10 or more points, and the Grizz hot 42-of-91 (46%) from the field, including 12-of-23 (52%) from the perimeter.

Jusuf Nurkic was good for 16 points and 19 rebounds with two blocked shots in a losing cause on Sunday. The Blazers did have four people with 17 or more points. While Covington ended up with just two points while misfiring on all seven of his field-goal attempts, he grabbed eight rebounds to salvage the line.

The Blazers haven't been able to string together much against the number lately. They're 0-4 ATS in the previous four following a straight-up win, and just 1-5 ATS in the previous six after a cover. Portland is also sliding against winning teams, going just 2-8 ATS in the past 10 games against teams above .500.

The Grizzlies swept the two-game set against the Blazers in Portland, and it's hard to imagine Memphis won't be able to carry over the momentum into a home game.

Even though both teams took a huge turn since they last met over the weekend, look for Memphis to bounce right back, while Portland struggles against a team which has been their kryptonite. The Grizzlies are 4-0 ATS in the past four at home against the Blazers, while going 7-3 ATS in the past 10 meetings. The UNDER is also 5-2 in the past seven meetings on the banks of the Mississippi River.