Eastern conference NBA action will resume on Tuesday night with the Bucks set to host the Lakers during the first matchup on TNT’s nationally televised slate.

Brooklyn enters Tuesday’s matchup as a two-point underdog against the homestanding Bucks – marking the 12th straight contest Milwaukee has been favored in.

The total for this event currently sits at OU 241.5, which is the fourth straight matchup containing Brooklyn to have the over-under open above 240. 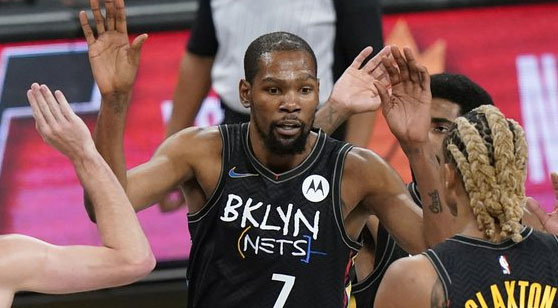 Kevin Durant scored 42 points in Sunday's loss to the Bucks as the Nets seek revenge on Tuesday. (AP)

The Bucks head into Tuesday’s contest following wins in three of their last five games – which includes victories over Charlotte, Chicago, and most recently – Brooklyn during that timeframe.

Similarly, the Nets went into Sunday’s loss against Milwaukee boasting wins in four of their last five games – with Brooklyn’s most recent defeat prior to that coming in a matchup the Blazers, as Kyrie Irving and company shot just 13-of-41 from downtown in.

Brooklyn and Milwaukee have split a pair of matchups during this year’s regular season – with the first of those contests going over the total set for Tuesday’s affair (248 points), and the second staying under that clip (231 points).

The first matchup between these teams resulted in a narrow victory for Brooklyn, as the Nets needed every bit of Kevin Durant and James Harden’s 64 combined points to pull off a one-possession victory over Milwaukee during the absence of Irving.

The most recent meeting between these teams took place this past Sunday as Giannis Antetokounmpo and Durant dueled 40-point performances in a back-and-forth affair that eventually ended up in a one-possession victory in favor of the Bucks.

The Nets have been an undeniable force in the East since acquiring Harden from Houston back in mid-January – currently sitting one game behind Philadelphia for the top spot in the conference with a record of 43-22, despite consistently being battered by injuries over the course of their campaign.

What’s even more impressive about Brooklyn’s achievements so far this year, is that they are finding success through mitigating circumstances – considering Irving, Durant, and Harden have all missed more than 15 games apiece due to injury concerns this season, which has led to Brooklyn’s big three only starting two games together since uniting.

Betting the ‘over’ in Nets’ games has been one of the most profitable plays across the league this year – with the total going 'over' at a 37-28 clip in matchups containing Brooklyn so far this season.

Make note though, the total has stayed 'under' in five of Brooklyn’s last seven games – which includes this past Sunday’s matchup against the Bucks.

Antetokounmpo returned from a seven-game injury leave for the Bucks’ meeting with Atlanta back on April 15th. Milwaukee has relatively struggled since that matchup though, considering the Bucks are 6-4 SU during that span, despite being favored in all those contests.

Betting the ‘over’ in Bucks’ games has also been an extremely profitable play so far this year – with the total going over at a 36-27-1 clip in matchups containing Milwaukee this season.

That trend of high-scoring affairs appears to have fizzled out lately though – considering the total has stayed 'under' in five of the last six Bucks’ games.

Khris Middleton appears to be gradually shifting into playoff-mode as this year’s regular season continues to wind down.

The two-time All-Star heads into Tuesday after attempting 20 or more field goals in three straight games, while posting a minimum of 22 points in all three of those outings.

During Milwaukee’s victory over the Nets on Sunday, Middleton put up 26 points on 52% from the field – despite his performance being completely overshadowed by Antetokounmpo’s 49 points on 36 shot-attempts, which is the largest amount of field goals the Greek Freak had attempted in a game all season.

I’ll back Middleton to go 'over' that number again here, as I have to imagine the Bucks will opt to utilize Giannis slightly less against Brooklyn this time around – which should allow Middleton to expand upon the solid performance he posted on Sunday.

The matchup between Milwaukee and Brooklyn that took place this past Sunday was an exciting back-and-forth affair that ultimately resulted in a one-possession victory for the Bucks – as Durant missed a potential game-tying three-point attempt at the final buzzer to seal a narrow victory for Giannis and company.

I’ll side with Brooklyn to bounce-back here though, as I still believe the Nets are the better team in this matchup – even after seeing how things panned out Sunday afternoon without Harden in the mix.