The San Antonio Spurs (31-32) look to get back to .500 when they battle the Utah Jazz (46-18) in the second of a two-game set at Vivint Arena in Salt Lake City on Wednesday at 9 p.m. ET. The game is nationally televised on NBATV.

The Spurs were dumped 110-99 on Monday night in SLC, as the homestanding Jazz covered a 5.5-point number as the OVER (222.5) connected. The loss for San Antonio was their fourth in a row, although San Antonio is still 5-1-1 ATS across the past seven.

The Jazz are favored by the identical 7.5-point line that they were favored by in the front end of the back-to-back set, and the same line they subsequently covered on Monday by a 110-99 score. The total is similar to Monday's line, too, set at 219.5. The UNDER connected in the first meeting with a total of 209 points.

San Antonio is looking to get back into the playoff picture. Their four-game losing streak has pushed them down to the 10-line, one full game back of the Golden State Warriors, although they do have two games in hand. Still, the Spurs need to get back on the ball soon, or they'll be on the couch watching other teams in the postseason. 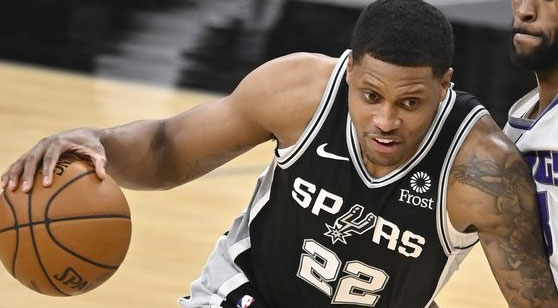 The Spurs look to bounce back from an 11-point road loss to the Jazz on Monday as the teams meet again on Wednesday. (AP)

The Spurs hit just 46.7% from the field, or 42-for-90, and starting small forward Keldon Johnson misfired on seven of his 10 shot attempts to wind up with just six points. DeMar DeRozan scored a team-high 22 points with six assists, three steals and a blocked shot in 33 minutes, while hitting 10-of-17, and he was the best of the lot. Dejounte Murray chipped in with 15 points, six boards and five dimes, but he also turned it over four times in 23 minutes.

For the winning side, they hit 50% from the field, knocking down 44-of-88 from the field, including 11-of-36 from behind the three-point line. Four of the five starters went for 11 or more points, while Jordan Clarkson came off the bench for 16 points. He was just one of three players to come off the pine and score. Rudy Gobert was the big dog barking the loudest, going for 24 points, 15 rebounds, three blocked shots and two steals on 10-of-14 from the field in 30 minutes.

The Spurs desperately need to plug the hole in their boat and get a much-needed victory to get back on track, but Utah has handled them in both Salt Lake City and San Antonio in the two previous meetings this season. The Jazz have averaged a 16.0 PPG win margin.

The Spurs are struggling in the win-loss column lately, but they have been solid against the number with a 5-1-1 ATS mark across the past seven games overall. They're also an amazing 12-3-1 ATS mark in the previous 16 games on the road, including 5-1-1 ATS in the past seven away games against teams with a winning home record.

As far as the total is concerned, the OVER is 4-1 in the past five games overall for San Antonio, while going 11-4 in their past 15 against winning teams. The UNDER is 6-1 in their past seven following a SU loss by 10 or more points.

The Jazz have failed to cover in five of the past six games at Vivint Arena, although they did break an 0-5 ATS skid by topping the Spurs Monday. They're 8-2 ATS in the past 10 at home against teams with a winning road mark, too.

Utah has hit the UNDER in five straight at home, while going 6-2 in the past eight games overall. The UNDER is also 8-2 in the past 10 at home for the Jazz against teams with a winning road record. As mentioned above, the OVER-UNDER has split in the first two meetings in this series this season, so there's not much to glean there.

The Spurs are tumbling, and they're not playing very good basketball. But head coach Gregg Popovich tends to get them fired up after they've been dumped by double digits. Yes, San Antonio is 0-4 ATS in the past four meetings, and 1-4 ATS in the past five trips to SLC, but you can bet on San Antonio to keep this one a lot closer than the first end of the back-to-back.

These teams played a lower-scoring game on Monday, and the best bet on the board might be playing the UNDER here. Utah has cashed the UNDER in five in a row at Vivint, and six of the past eight overall. And San Antonio is having difficulty scoring the basketball. That makes the UNDER worth playing, and perhaps playing fairly heavy.