Non-conference NBA action will resume on Thursday night with the Mavericks set to host the Nets during the first matchup on TNT’s nationally televised slate.

Dallas enters Thursday’s contest as a four-point underdog against the visiting Nets, which snaps the Mavericks four-game streak of being listed as a favorite.

The total for this event currently sits at OU 233.5 – marking just the third time the over-under for a Mavericks’ game has been set above 230 since the start of March (35 games). 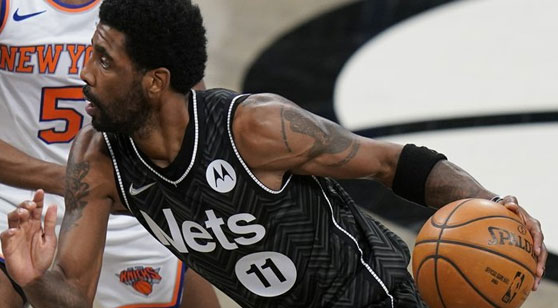 The Nets seek revenge for a 17-point home loss to the Mavericks in February as the two teams meet on Thursday. (AP)

The Mavericks head into Thursday’s contest boasting wins in four of their last five games – with Dallas’ only loss during that timeframe coming in a matchup against the Kings, as Luka Doncic and company shot just 6-of-35 from three-point territory.

Dallas’ most recent affair resulted in a double-digit victory over the Heat, as Doncic practically took the night off while Tim Hardaway Jr. went off for 38 points while drilling 10-of-18 three-point attempts during the Mavs’ win.

On the flip side, the Nets enter Thursday riding a three-game losing streak – with two of those losses coming in a two-game mini-series against Milwaukee, and the other coming in a matchup against Portland that Kevin Durant and James Harden did not participate in.

The Mavericks have won two straight matchups against Brooklyn – with the first of those contests taking place last season, and the most recent taking place back in February of this year.

The recent affairs between these teams aren’t very telling of what we should expect to see on Thursday night though, considering Irving and Durant did not participate in either of those contests, and Harden did.

The Nets have established a dominant offensive presence in the East since acquiring Harden from Houston back in mid-January – currently sitting two games behind Philadelphia for the top spot in the conference with a record of 43-23, despite consistently being battered by injuries over the course of their campaign.

Brooklyn’s injury concerns are beginning to look up though as the post-season approaches – considering Durant and Irving appear to be trucking along at full-strength, and Harden should be set for a return somewhat soon.

Betting the ‘over’ in Nets’ games has been one of the most consistently profitable plays across the league this year – with the total going 'over' at a 37-29 clip in matchups containing Brooklyn so far this season.

Make note though, that trend of high-scoring affairs has fizzled out lately – considering the total has stayed 'under' in six of Brooklyn’s last nine contests.

Dallas is currently knotted up with the Lakers for the fifth seed in the West, which trails the fourth-seeded Nuggets by over six games – leaving neither of those teams much of an opportunity to make up ground before the regular season concludes.

When it comes to the total, Dallas and Brooklyn sit on completely opposite sides of the spectrum – considering the Mavericks have drawn ‘under’ results in 55.4% of their matchups this season, which ranks fifth across the league in that department.

Similar to Brooklyn though, the Mavericks have experienced a change of pace across their most recent stretch contests – which has led to the total going 'over' in five of their last six games.

The Nets have struggled over their latest stretch of games – heading into Thursday’s contest riding a three-game losing streak that includes defeats at the hands of Milwaukee (2) and Portland during that span.

I’ll side with Brooklyn to bounce-back here though, as shots are bound to start falling for Durant and company against a porous Dallas defensive unit comfortably ranking in the bottom half of the league in defensive rating (112.2).