The Los Angeles Lakers (37-28) and the Los Angeles Clippers (44-22) square off at Staples Center in Southern California on Thursday night at 10 p.m. ET. The game is nationally televised on TNT.

The Lakers are coming off a low-scoring 93-89 victory against the visiting Denver Nuggets on Monday as four-point underdogs as the UNDER (214) connected, as LeBron James was back on the shelf.

The Clippers snapped a three-game losing streak with a win against the Toronto Raptors on Tuesday, although they failed to cover as 11-point favorites as the UNDER (217.5) cashed for the sixth consecutive outing. The Clips enter on a five-game non-cover skid, too.

The Clippers head into this one favored by 7.5 points against their cross-town rivals while the total sits at 222.5. The Clips are looking to build upon the momentum of their victory against the Raps, while trying to snap an 0-5 ATS slide.

The Lakers were glad to have LeBron and Anthony Davis back from rather lengthy injuries, but that lasted all of two games before James is back on the shelf with a sprained right ankle. He will miss Thursday's game against the Clippers, and he could sit out for Friday's game against the Portland Trail Blazers, although head coach Frank Vogel hasn't ruled him out for that one. 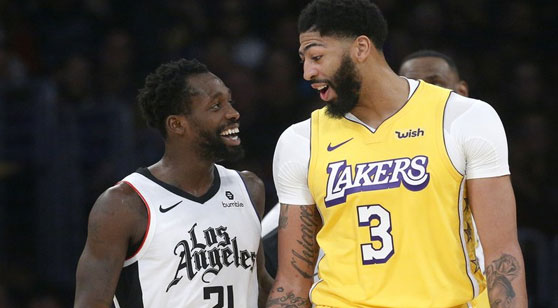 The Lakers look to knock off the Clippers for the first time in three tries this season at Staples Center. (AP)

The Lakers managed to hit just 44% of their field-goal attempts in Monday's 93-89 win against the Nuggets. A.D. tried to hold down the fort while hitting 9-of-19 from the field to lead the way with 25 points, seven rebounds and three blocked shots in 33 minutes. The Lakers had four other players with double-digit points, although Marc Gasol was really the only effective player off the bench with 10 points, seven rebounds, two assists and a blocked shot.

The Clippers pushed past the Raptors 105-100, but they failed to come close to hitting as 11-point favorites. They were 52% from the floor, or 39-of-75 from the field, including 15-of-34 from behind the three-point line. The best part was their work at the free-throw line, going 12-of-13, or 92%. No one recorded a double-double, but Paul George was good for 22 points, nine rebounds, four assists and a blocked shot with two triples.

The Clippers have had their way with their Staples roommates this season, going 2-0 SU/ATS while the OVER-UNDER has split 1-1. Of course, the last time these teams played on April 4, there was no A.D. or LeBron. Kawhi Leonard flirted with a triple-double, going for 19 points, 10 rebounds and eight assists. Marcus Morris also chipped in with 22 points and seven rebounds on 9-of-13 shooting, getting the best of his twin brother. Markieff Morris has nine points on 4-of-10 shooting in a losing effort.

The Lakers saw Montrezl Harrell go for a team-best 19 points, six rebounds and two blocked shots as he picked up some of the slack with A.D. and LeBron out. The Lakers were just 40% from the field, going 32-of-80, including 7-of-23 from behind the arc at 30%.

The Lakers have managed 109.4 points per game while ranked 23rd in the NBA, while hitting 35.3% from the field to rank 21st. Their best attribute on offense has been their ability to score inside, and they rank 11th in the league at 47.3%. However, they really need to start getting better from the free-throw line if they want to repeat as champs. They're just 74.2% this season from the charity stripe, ranking 27th. That showed up in the win over Denver, as they were just 11-of-16, or 69%, from the line.

The Lakers snapped a cover skid, going 0-6-1 ATS in their seven previous games to the win over the Nuggets. They haven't covered consecutive games since a 3-0 ATS run from April 6-10. The UNDER has been the way lately, going 3-1 across the past four outings.

The Clippers have struggled to cover the number, misfiring in the past five outings against the number. At least they were able to snap their three-game losing streak with the win over the Raps. Total bettors have absolutely loved the Clippers at the window, as the UNDER has cashed in six straight games, and nine of the past 10 overall.

The Clippers rank 10th in the league with 114.2 PPG, and they're fifth in the league with 48.2% field-goal percentage while knocking down a league-best 41.7% from behind the three-point line. They're also 83.5% from the free-throw line, which is night and day compared to the Lakers.

If LeBron were in the lineup for this one, it might be a different story. Yes, the Clippers have also been struggling lately, but they have had the number of the Purple and Gold this season. They also 5-1 ATS across the past six meetings in this series, including a neutral-site battle in the bubble in Orlando last summer.

The way these teams have been scoring lately, you can expect a lower-scoring game. The Clippers have been a friend to the UNDER bettor, and that isn't coming to an end anytime soon.