The New York Knicks have locked up their first winning season since the 2012-13 campaign. They are set to at least make the play-in tournament and should make it to the playoffs proper for the first time in eight seasons. That has made Tom Thibodeau one of the favorites to be named NBA Coach of the Year.

The Knicks are currently in position to be the No. 4 seed in the Eastern Conference, and they are desperately trying to hold on to that spot over the final week of the regular season.

However, they will have to face both Los Angeles teams on the road, starting with the Clippers on Sunday afternoon, and they close out the year with a home game against Boston. 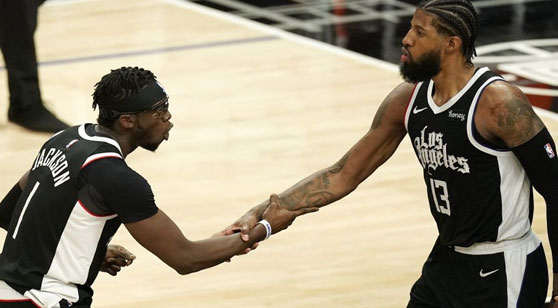 The Clippers seek the season sweep of the Knicks as the teams hook up at Staples Center on Sunday afternoon. (AP)

The Clippers have ensured they will be a top-four seed in the Western Conference. They are jostling with the Denver Nuggets for the No. 3 seed out West, and they currently hold a slim lead over the Nuggets.

The Clips have the second-best point differential in the conference and are sitting at 29-9 in the Staples Center.