Western Conference NBA action will resume on Sunday night with the Lakers set to host the Suns during the final matchup on NBA TV’s nationally televised slate.

Phoenix enters Sunday’s contest as a six-point favorite over the homestanding Lakers – marking the fourth consecutive game Los Angeles has been listed as an underdog in.

The total for this event currently sits at OU 215.5, which is the lowest over-under set for a Suns’ game since Phoenix squared off with the Heat back on March 23rd (U 213.5). 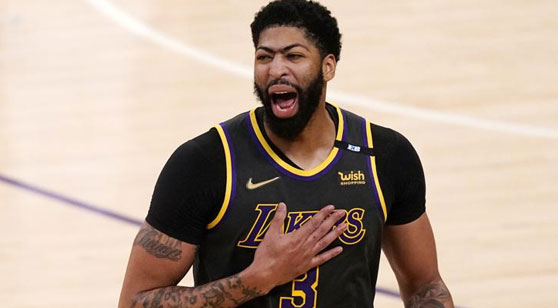 Anthony Davis and the Lakers look to beat the Suns for the first time in three tries this season on Sunday. (AP)

The Lakers head into Sunday’s contest following losses in five of their last six games – with Los Angeles’ only victory during that timeframe coming in a matchup against the Nuggets, which was also an event LeBron James did not participate in.

Los Angeles’ latest matchup resulted in a five-point loss to the Blazers – as the Lakers ended up falling behind by double-digits before the end of the first quarter, and never managed to fully recover from the early deficit.

On the flip side, the Suns enter this event following wins in six of their last seven games – with Phoenix’ only loss across that span coming on the second half of a back-to-back against the Hawks.

Phoenix’ most recent affair resulted in a blowout win over the Knicks – as the Suns managed to hold New York to just 42 points in the second half, which allowed Devin Booker and company to run away with a 20-point victory.

Phoenix has reigned victorious in both of its matchups against the Lakers so far this year – with the first of those contests going 'over' the total set for Sunday’s tilt (218 points), and the second staying 'under' that clip (205 points).

The Suns' first win over Los Angeles this season was slightly more impressive than the second – considering King James played during the absence of Davis in the first matchup between these teams, and neither of them played in the most recent one.

This time out, the Lakers will be forced to test things out with the new hand that they have been dealt – which consists of LeBron watching from the sidelines while Davis and the gang try to dodge a play-in situation.

Phoenix enters Sunday’s contest following wins in 19 of the last 25 games, which currently positions the Suns just one game below the league-leading Jazz on the Western Conference totem pole – as the race for home-court advantage in this year’s postseason remains tight with roughly five games left to play.

Betting the total in Suns’ games was a roller-coaster ride for the majority of this season, as Phoenix’ pace of play was all over the place after initially adding CP3 to the mix – despite finding great deals of success during that period.

There has been some newfound consistency in scoring-volume during Phoenix’ most recent stretch of contests though – considering the total has gone 'over' in 15 of the last 20 Suns’ games.

After the Lakers loss to Portland on Friday night, the defending champs head into Sunday possessing a record of 37-30 on the year – currently sitting in the seventh spot out west, which is a position that would require a play-in series if the season ended today.

Betting the ‘under’ in Lakers’ games has been one of the most profitable betting trends in the league this season – with the over-under currently sitting at a 25-41-1 clip in matchups containing Los Angeles over the course of their current campaign.

That trend of low-scoring affairs seems to be picking up steam lately too – considering the total has gone 'over' in just one of the last six Lakers’ games (O 215, vs TOR).

With King James being forced to miss several contests due to injury, Davis has cranked up the intensity in the scoring department across L.A.’s most recent stretch of games.

AD has now scored 25 or more points in two of his last three outings, which is highlighted by the 36-point performance he posted against the Blazers during the Lakers’ loss on Friday night.

I’ll back Davis to have another big night on the scoreboard here, as the Lakers are going to need something extraordinary from their All-Pro big man to pull off the upset in this one.

The Lakers enter Sunday’s contest following losses in five of their last six games – with L.A.’s only victory during that span coming in a matchup against Denver that the Nuggets scored just 89 points.

Contrarily, Phoenix heads into this event boasting wins in five of their last six games – with the Suns only loss across that span coming on the second half of a back-to-back against Atlanta.

I’ll take the points with Los Angeles here, as I expect the Lakers to put forth a little extra effort to avoid a play-in series down this final stretch of matchups.