The Dallas Mavericks (40-28) hit the road to take on the Memphis Grizzlies (35-33) at FedEx Forum on the banks of the Mississippi River on Tuesday night at 8 p.m. ET.

The Mavericks have clinched a playoff spot, but they're trying to hold off the Portland Trail Blazers for the fifth spot in the Western Conference, and they're just two games clear of the Los Angeles Lakers as they attempt to avoid dropping into a play-in spot.

The Grizzlies are squarely in the mix for a play-in spot, winners of each of the past two. The Mavs have won four in a row, so we get two teams rounding into form right before the playoffs start.

The Mavericks have rattled off four straight victories, and they're favored by a bucket to make it five wins in a row. The Grizzlies are searching for their third straight win.

While it might look a tad bit disrespectful that the Grizzlies are underdogs at home despite the fact they're an above .500 team fighting for a playoff spot, you have to remember that they're just 15-18 on their home floor, while the Mavs are 21-13 in away games. 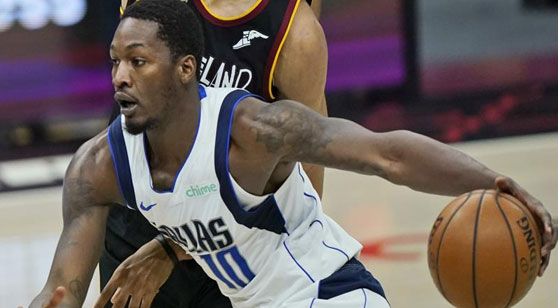 The Mavericks square off with the Grizzlies on Tuesday night seeking their third win over Memphis this season. (AP)

The Mavericks rolled up a pair of wins in a home-and-home against the Cleveland Cavaliers, covering both games at 10.5-point favorites. That includes a 124-97 win in Cleveland on Sunday as the OVER (218.5) connected. Overall the Mavs have four wins and covers in a row, while splitting the OVER/UNDER 2-2.

Dwight Powell surprised off the bench with 12 points, nine rebounds, four assists and four blocked shots in 27 minutes in Cleveland last time out. He was one of five players with double-digit point totals, led by Tim Hardaway Jr. with 25 points.

The Grizzlies held off the visiting Pelicans on Monday, and now they have the quick turnaround with a much better team visiting the Forum. Memphis topped New Orleans 115-110, but the Pels came away with the cover as 9.5-point underdogs as the UNDER (229) cashed.

Jonas Valanciunas continues to be a man among boys for the Grizz, going for 20 points, 11 rebounds and five blocked shots against NOLA. Ja Morant was also a beast with 12 points and 12 boards against the Pels.

The Mavericks have won three straight meetings against the Grizzlies since Memphis picked up a 121-107 win in Dallas on Feb. 5, 2020 as four-point underdogs as the OVER hit.

Dallas has won five of the past six meetings overall, while going 4-2 ATS as the OVER is also 4-2 during the span. The last time the Grizzlies topped the Mavericks on their home floor was a 98-88 win as three-point favorites on Nov. 19, 2018.

The Mavericks have won four consecutive victories and covers, including the home-and-home against the lowly Cavaliers, and against the playoff-bound Brooklyn Nets and Miami Heat. Their last loss was a 111-99 setback at American Airlines Center against the Sacramento Kings as 6.5-point favorites.

The last time they faced the Grizz in Memphis they posted a 114-113 win and non-cover as the OVER hit. We could see another ultra-close game here, especially since Dallas will have to do without Kristaps Porzingis (knee), who has officially been ruled OUT.

The Grizzlies have picked up a pair of wins in Toronto, well, in Tampa, and at home against New Orleans. Those are two teams not headed for the postseason, so it isn't terribly impressive. Over the past six games, the Grizz are a very mediocre 3-3 SU/2-4 ATS, with the OVER/UNDER splitting in the outings.

Memphis is aiming for its third consecutive victory, something the Grizzlies haven't been able to accomplish since a four-game win streak from April 2-7.

The Grizzlies have hit the UNDER in each of the past three outings, and they haven't had four straight UNDER results since March 15-20.

The Mavericks have really pushed around the Grizzlies in recent seasons, although Memphis did cover the spread in the most recent meeting in Memphis last month. Dallas would be a lot more attractive in this battle if Porzingis were healthy enough to play, but he's not.

The Grizzlies have had a relatively short injury report lately, and that's a very good thing. But they have been spinning their wheels a little bit, and no game is ever a sure-fire win. They have losses to subpar teams like the Detroit Pistons and Orlando Magic since May 1. They'll add another loss to the Mavericks here, too.