These teams just played Sunday in Boston, with the Heat coming away with a 130-124 road victory. It was a huge win for the Heat, too, as they have a lead of two full games over the Celtics for the sixth spot in the Eastern Conference, as they look to avoid the play-in round.

The Celtics are slight underdogs at home in the back-end of the home-and-home set. They desperately need a victory on their home hardwood, or they risk having to play their way into the postseason. The Celtics were unable to deliver a victory in Sunday's game, perhaps distracted by the ugly, two-tone jerseys of the Heat.

The total is set in the low 220's, and these teams smashed that with a total of 254 points on Tuesday. Lately the Celtics defense has been non-existent, a trend we're seeing across the NBA as offense reigns supreme. In fact, perhaps only the Philadelphia 76ers and a few other teams pay much mind on defense. The rest of the league is just wide open. 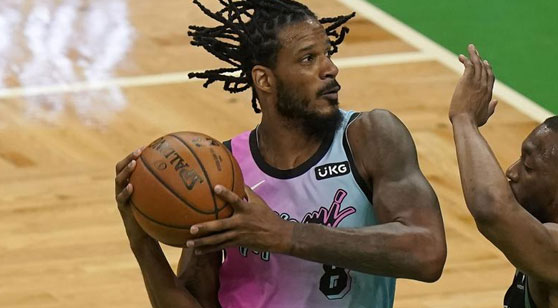 Trevor Ariza and the Heat seek their second win over the Celtics in three days when they meet on Tuesday night. (AP)

The Heat rolled up 130 points of offense on the Celtics at TD Garden last time out, including a team-high 26 points from Jimmy Butler. Buckets also added 11 assists, eight rebounds and a pair of steals with one three-pointer. Duncan Robinson also showed out with 22 points on 7-of-13 shooting, including 6-of-10 from behind the arc.

Robinson was one of five Miami players to hit at least three triples, and they were an impressive 16-of-35, or 46%, from behind the three-point line, while also hitting a robust 57% from the floor and 91% from the charity stripe. In fact, they misfired on just two of 22 free-throw attempts, and that's always a recipe for success.

For the Celtics, Evan Fournier dropped a game-high 30 points in a losing effort, while Jayson Tatum was good for 29 points. Fournier also chipped in with eight dimes, three boards and a swat, while Tatum filled up the stat sheet with six assists, five rebounds, a steal and two blocked shots.

There isn't a whole lot to glean from the season results to date. In Sunday's game, Miami won in Boston while covering as short 'dogs with the OVER hitting, and in the previous outing Jan. 6 in Miami, we saw the Celtics scratch out a low-scoring 107-105 win as 2.5-point underdogs as the UNDER connected.

If you're to put stock in either of those two matchups, the most recent game Sunday means way more, as it's a better representation of what to expect in Tuesday's battle.

The Heat won and covered as short 'dogs on Sunday, and the game appeared closer than it really was. While Miami won 130-124, and that's impressive enough, they were outscored 40-25 in the fourth quarter, and 71-51 in the second half.

Miami have been cover kings lately, going an impressive 4-1 ATS across the past five outings, including covers in each of the past two. However, they covered three in a row on just one occasion, from April 18-21, across the past month and a half.

Miami is on a serious roll for total bettors, too, as the OVER has connected in a season-high nine for the Heat.

The Celtics picked a bad time to play their worst basketball of the season. They're 1-3 SU/ATS across the past four outings, and 3-6 SU/2-7 ATS over the previous nine contests, tumbling to the ninth spot in the Eastern Conference. If not for the play-in game, the idea of which LeBron James of the Los Angeles Lakers absolutely LOVES, by the way - lol, then the C's would be in a world of hurt and in danger of missing the playoffs completely.

The Heat are starting to hit their stride at just the right time, similar to what we saw from Miami last season in the bubble during the playoffs, as they caught fire and flew all the way to the NBA Finals. As the C's have struggled lately, rather mightily, the Heat are 5-1 SU/4-1-1 ATS across the past six outings.

The best bet on the board might not necessarily be the side, however. I absolutely love the OVER, which is on a 9-0 run for the Heat, while cashing in all but one of the past eight games for the Celtics. Keep hammering the OVER for both of these teams until they show some semblance of defense, or books start to set the total line too high. So far that hasn't been the case lately.