Western Conference NBA action will resume on Friday night with the Warriors set to host the Pelicans during the final matchup on TNT’s nationally televised slate.

Golden State enters Friday’s matchup as a two-point favorite over the visiting Pelicans – marking the third time the Warriors have been favored across their last seven contests.

The over-under for this event currently sits at 226 – which is, on average, 10 points lower than the totals set for the previous two matchups between these teams (236 points). 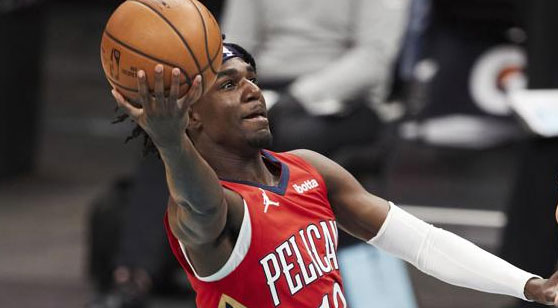 The Pelicans continue their road trip against the short-handed Warriors on Friday night at Chase Center. (AP)

The Warriors head into Friday’s matchup boasting wins in six of their last seven games – with Golden State’s only loss during that timeframe coming on the second half of a back-to-back set against their upcoming opponent in this contest, the Pelicans.

Golden State’s most recent affair resulted in a victory over the Suns – as Stephen Curry had a tough night at the offensive end of the floor (21 points, 7-of-22 FGA), but Andrew Wiggins provided more than enough support to propel their team to a six-point win in a contest they were listed as a four-point underdog in.

On the flip side, New Orleans enters Friday following losses in three of the last four games – with the Pelicans only victory across that span coming in a matchup against Charlotte, which was a contest that Lonzo Ball and company trailed by seven points at the start of the fourth quarter.