Eastern Conference postseason action is set to kick off in a TNT double-header of first round play-in games on Tuesday night – beginning with Indiana-Charlotte at 6:30 ET, which will be followed by Washington-Boston immediately after.

So, VI is getting you ready with a variety of betting resources to help handicap both contests on the evening’s slate.

Washington enters Tuesday’s contest as a two-point road underdog against the homestanding Celtics – marking just the second time Boston has been favored across the last five games.

The total for this event sits at OU 232.5, which is just the eighth time since the start of the current season that the over-under for a Celtics’ game has been set above 230. 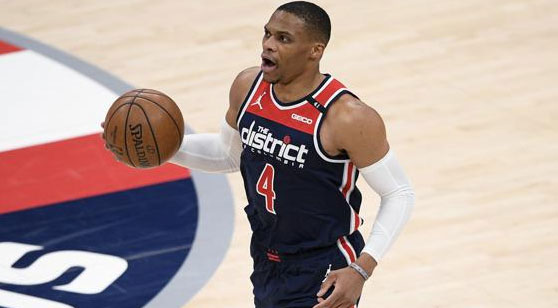 Russell Westbrook and the Wizards look to grab the 7th seed in the Eastern Conference with a win at Boston. (AP)

The Celtics closed out the regular season with an incredibly disheartening stretch of performances – heading into Tuesday following losses in six of their last seven games, with Boston’s only victory during that timeframe coming in a matchup against the tanking Timberwolves (23-49).

Boston has struggled all season, so the current level of success Jayson Tatum and company have experienced lately may not be alarming to some fans.

But the Celtics have played really bad basketball since Jaylen Brown’s season-ending ankle injury back on May 5th, so it will be interesting to see how head coach Brad Stephens decides to approach this play-in tournament under his team’s extenuating circumstances.

On the flip side, Washington enters this event following its most impressive stretch of performances so far this season – heading to Tuesday boasting wins in 15 of their last 20 games, with all five of the Wizards’ losses across that window coming in matchups against teams that are currently still alive in this year’s postseason.

Boston has reigned victorious in two-of-three regular season matchups against Washington this year, with all three of those contests comfortably staying 'under' the total set for Tuesday’s tilt (OU 232.5) – thanks to these teams combining for an average of just 213 points per game across their first three meetings.

The first matchup between these teams took place back in early-January and resulted in a nine-point victory for the Celtics.

Tatum and Brown teamed up for 59 points on 50% from the field in the event, which ended up being more than enough to trump Bradley Beal’s magnificent 41-point performance on 55% shooting.

The second meeting between these teams was Washington’s time to shine, as the Wizards managed to take advantage of a miserable shooting performance from Tatum (6 points, 3-of-14 FGA), and held Boston to 91 points on the way to a double-digit victory.

After being eliminated from the bubble before the start of last year’s playoffs with a lackluster record of 25-47, the Wizards went out and acquired Russell Westbrook from the Rockets in exchange for John Wall and a pick this past offseason.

I think it’s safe to say Washington has emerged as the immediate victor in the trade by now though, considering Houston finished up the regular season with the worst record in the league at 17-55, while the Wizards have a handful of potentially winnable play-in games on tap.

Betting the total in Wizards’ games was a rollercoaster ride from start-to-finish during the regular season – with the total finishing up deadlocked 36-36 in matchups containing Washington.

That trend of sporadic scoring continued down the homestretch of the regular season too – considering Washington wrapped up its campaign by following up six straight ‘over’ results with three consecutive ‘under’ results.

After coming within two games of reaching last year’s NBA Finals, the Celtics have been rather pedestrian over the course of this season – entering Tuesday’s play-in round as the seventh seed in the East after posting a record of 36-36 SU, which fell four games short of Miami for the final legitimate playoff spot in the conference.

Betting the 'over' in Celtics’ games played at a relatively profitable clip for most of the current season – given the total sat at a 35-31 clip in matchups containing Boston prior to Brown’s injury.

That high-scoring trend seems to be on the decline with Boston’s superstar guard sidelined though, considering the total has stayed 'under' in four-of-six matchups following the injury.

Since Brown’s season-ending injury, the Celtics have been forced to explore their scoring options at the offensive end of the floor – and it seems like Kemba Walker has become the primary candidate to assume an increased workload during the superstar’s absence.

Walker has scored 32 or more points in three of his last four regular season outings before sitting out Boston’s final three contests.

I’ll back Kemba to have a solid night on the scoreboard here, as Washington has become notorious for defending guards poorly – and Tatum can’t do all of Boston’s scoring.

If the Celtics were at full-strength and showing signs of life towards the conclusion of the regular season, I think my vote of confidence would go to Boston in this matchup – considering Washington ranks 17th among the 20 remaining teams in overall defensive rating (112.3) and the Celtics typically have two All-Star scoring options at the helm.

Boston heads into the postseason with Brown sidelined indefinitely though, and the rest of the Celtics’ lineup is still having trouble getting its feet back under them following the injury.

I’ll back the Wizards to handle business here, as I think Boston is going to have a tough time keeping up Westbrook and Beal down the stretch of this one without the other half of its superstar-tandem.