The Western Conference Play-In Tournament will resume on ESPN this Friday night with an elimination game between Memphis and Golden State is the only matchup on the evening’s slate. So, VI is getting you ready with a variety of betting resources to help handicap all the action.

Golden State enters Friday’s contest as a four-point favorite against the visiting Grizzlies after the Warriors pulled off a double-digit victory over Memphis during the final game of the regular season this past Sunday.

The total for this event currently sits at OU 220.5 – marking the lowest over-under set for a Grizzlies’ game since matching up with Orlando back on May 1st (O 218). 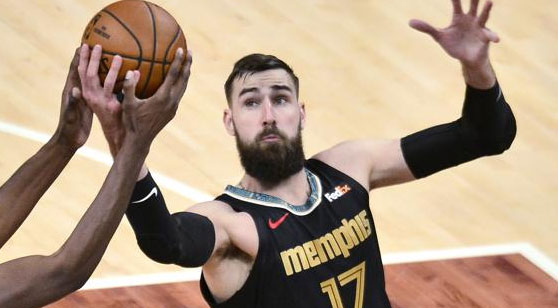 Grizzlies' center Jonas Valanciunas is coming off a 23-point, 23-rebound effort in Wednesday's win over the Spurs. (AP)

The Grizzlies had their sights set on the eighth seed in the conference down the homestretch of the regular season – heading into their final matchup prior to the playoffs riding a five-game winning streak, which almost allowed Memphis to swoop in and steal Golden State’s first-round play-in opportunity against the Lakers.

Inevitably, the Grizzlies were forced to walk into the buzzsaw named Stephen Curry during their final regular-season contest though and ended up dropping the crucial seeding game by double-digits – landing Memphis in the first round do-or-die matchup against the Spurs.

In their postseason opener against the Spurs on Wednesday night, Memphis bounced back with a narrow win behind a gutsy defensive effort – as Memphis held the Spurs to just 96 points on 35% from the floor during their four-point victory.

On the flip side, the Warriors wrapped up this year’s regular season on a remarkably high note – heading into Wednesday’s play-in matchup against the Lakers boasting wins in eight-of-nine games, with Golden State’s only loss across that span coming on the second half of a back-to-back set against the Pelicans.

Golden State’s hopes of playing into the postseason bracket with a quick victory were crushed during a loss at the hands of the Lakers on Wednesday night though – as Steph teamed up with Andrew Wiggins for 58 points on 22-of-41 from the floor in the contest, but their united effort still wasn’t enough to hold off a late-fourth quarter siege headed by a partially-blinded LeBron James.

The Warriors have claimed victories in two-of-three regular-season matchups against the Grizzles this year – with Golden State and Memphis failing to combine for 220 points in all three of those contests.

The first two matchups between these teams were paired up in a back-to-back set during Curry’s five-game absence back in mid-March. Golden State’s supporting cast still managed to steal a victory in one of those affairs though – as Wiggins scored 40 points on 14-of-24 from the floor during the first matchup of the set, which was enough to secure a double-digit victory.

Curry did participate in the Warriors’ bout with Memphis that took place this past Sunday though, and he dominated – going off for 46 points, nine assists, and seven rebounds on the way to Golden State’s second double-digit victory over the Grizzlies this season.

After losing to Golden State on the final calendar day of the regular season and finishing ninth in the Western Conference standings, the Grizzlies were forced to square off against the 10th seeded Spurs in the first round of the play-in tournament due to the league’s new postseason format.

Memphis proved its regular season campaign wasn’t a fluke on Wednesday night though, as the Grizzlies battled hard to a four-point victory over San Antonio behind 20-point performances from Ja Morant, Jonas Valanciunas, and Dillon Brooks.

Betting the total in Grizzlies’ games was a rollercoaster ride from start to finish during the regular season – with the total finishing up deadlocked 36-36 in matchups containing Memphis.

There has been some newfound consistency in scoring volume across Memphis’ latest stretch of contests though – considering the total has stayed 'under' in seven of the last eight Grizzlies’ games, which includes Wednesday’s 103-100 postseason victory over San Antonio (U 223.5).

The Warriors may be long past the days of 60-win seasons and stringing together consecutive NBA Finals appearances. Golden State still has the best shooter in the world though, and they certainly are not afraid to use him – considering Curry posted 30-point performances while attempting 13 or more long-balls in eight of his last nine regular-season outings, and went off for 37 points on 23 three-point attempts on Wednesday night.

Steph’s supporting cast has played well during his recent hot streak too, especially Wiggins – who averaged 26 points per game across Golden State’s final eight regular-season contests and managed to rack up 21 more on 56% from the floor in Wednesday’s postseason opener.

Despite ranking 12th in scoring this season (113.7), Golden State has still managed to cash ‘under’ tickets at the second-highest rate across the league in that department – with a total in Warriors’ games finishing up at a 58.3% clip on the year, which only trails the Lakers (60.6%).

That low-scoring trend was on full display Wednesday night too – considering the Warriors and Lakers combined for just 203 points on 42.5% from the floor during LA’s three-point victory.

After averaging a career-high 12.7 three-point attempts per game during this year’s regular season, Curry seems to be steadily building upon that number during his team’s transition into postseason form – having knocked down 9-of-22 long-balls against the Grizzlies this past Sunday, and 12-of-24 against Los Angeles on Wednesday.

I’ll roll the dice on an alternate long-ball line with Curry here, as the Warriors will be desperately battling to keep their playoff hopes alive on Friday night – which should result in Steph jacking up at least 20 three-pointers again in this one.

Golden State heads into Friday’s play-in game boasting wins in two-of-three matchups against the Grizzlies this season, despite Steph missing two of those contests due to a tailbone injury.

Curry did participate in the Warriors’ matchup against Memphis that took place this past Sunday though, and he dominated – as the two-time MVP went off for 46 points, nine assists, and seven rebounds on the way to Golden State’s double-digit victory that has ultimately given them homecourt advantage in Friday’s contest.

I’ll lay the points with the Warriors here, as I don’t think the Grizzlies possess nearly enough offensive firepower to match Steph’s presence beyond the arc in this one – especially if Golden State’s supporting cast gets going to any extent.