For the second straight season, the Los Angeles Clippers will face the Dallas Mavericks in the first round of the NBA Playoffs. The Clippers bested the Mavericks in six games last season, but it wasn’t easy.

Luka Doncic averaged 31.0 PPG, 9.8 RPG, and 8.7 APG while shooting 50% from the floor, and the Clippers had no answer for him. Dallas could have potentially posed more of a threat too, but Kristaps Porzingis only played three games in the series.

Now that Porzingis is healthy, and the Clippers have not been as strong as they were last season, the favorites could be in trouble. 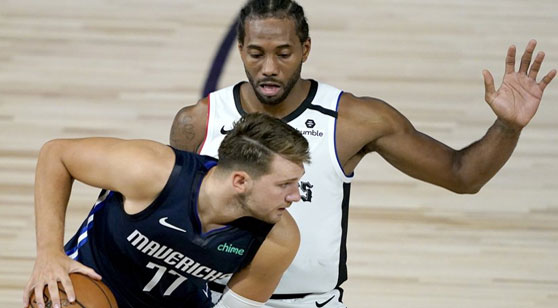 Luka Doncic and the Mavericks hook up with Kawhi Leonard and the Clippers in the playoffs for the second straight season. (AP)

The Clippers are the second favorites to come out of the Western Conference behind the Los Angeles Lakers. Although they are the No. 4 seed, they are seen as better than the Jazz, Suns, or Nuggets according to the oddsmakers, and they finished the regular season with the second-best point differential in the league.

It was always unlikely that the Clippers would earn a top seed due to their philosophy of load management. Kawhi Leonard and Paul George combined to miss 38 games during the regular season, and much of that was not due to injury but rest. Still, the Clippers were 43-19 in late April before a little bit of gamesmanship kicked in.

Los Angeles went 4-6 over its last ten games as the Clippers tried to position themselves in the opposite bracket as the Lakers. They closed out their season with consecutive losses to the worst two teams in the Western Conference in Houston and Oklahoma City, and neither Leonard nor George played in either game.

Dallas was a marginal team for most of the season. The Mavericks were only two games over .500 in late March, but they went 19-9 down the stretch to ensure they wouldn’t have to participate in the Play-In Tournament.

The Mavericks won 12 out of their last 16 games to finish ahead of the Trail Blazers and Lakers in the standings.

Oddly enough, the only team the Mavericks couldn’t beat during that stretch was Sacramento. The Kings went 3-0 against the Mavericks over a two-week span, and two of those victories came in Dallas. The Clippers’ advance scouts have surely looked at those games for specific insights on how to beat the Mavericks.

The first meeting between these teams this season resulted in history. Dallas led LA by a record 50 points at half, as the Clippers could only muster 27 first half points without Leonard on the court. These teams split their other two meetings in mid-March.

Doncic is the key to everything for the Mavericks. The 2019 NBA Rookie of the Year is an inevitable MVP, and he could eventually surpass Russell Westbrook as the NBA’s triple-double king by the end of his career.

Doncic averaged 27.7 PPG, 8.0 RPG, and 8.6 APG during the regular season, and he is still growing into his body. The 22-year-old improved his three-point shooting as the season progressed and is now someone to worry about from distance.

A healthy Porzingis is important to Dallas’ chances in this series. The 7’3 center has been injured often in his career, but he can be a difference maker on the offensive end. Porzingis averaged 20.1 PPG and 8.9 RPG this year, and he is making 37.6% of his threes. His defense does leave a lot to be desired though.

The other person that Dallas needs to be is healthy is Maxi Kleber. Kleber has been dealing with injuries over the second half of the year, and he missed 22 games during the season. He is averaging 7.1 PPG and 5.2 RPG, but he leads the Mavericks in three-point shooting and is a tough player to defend.

Jalen Brunson, Tim Hardaway Jr., and Dorian Finney-Smith are all making at least 39% of their threes. That gives Doncic options when he decides to drive and kick to the perimeter.

It’s now been 51 seasons, and the Clippers have still never made it to the conference finals. Leonard and George were added to erase that ignominious streak, but they were unable to do it last year despite being the title favorites entering the postseason.

George has had a great season for the Clippers. He was vilified for his performance in last year’s playoffs, and he responded with the best year of his career. He averaged 23.3 PPG, 6.6 RPG, and 5.2 APG in the regular season, nearly matching Leonard’s numbers in those categories.

George hit 46.7% of his field goals and 41.1% of his threes to be one of the most efficient volume scorers in the league too.

Leonard averaged 24.8 PPG, 6.5 RPG, and 5.2 APG. He made 51.2% of his field goals and 39.8% of his threes, and he did it while being one of the best on-ball defenders in the league. His defense is what made him a two-time NBA Finals MVP, and he will likely draw the task of guarding Doncic.

The Clippers were the best three-point shooting and free throw shooting team in the NBA during the regular season. L.A. made 41.1% of its triples and shot 83.9% from the charity stripe, leading to the Clips ranking second in shooting efficiency.

The first five games between these teams last season sailed 'over' the total. There were an average of 250.8 PPG in Game 1 through Game 5, so the best bet is the 'over'.