There are a lot of people doubting the Milwaukee Bucks heading into the playoffs. Milwaukee finished behind Philadelphia and Brooklyn in the battle between the Eastern Conference’s three best teams.

The Bucks haven’t acquitted themselves well in the playoffs the last few seasons, and they won’t find it easy to knock off the Miami Heat in the first round.

Miami beat Milwaukee in five games in last year’s Eastern Conference semifinals on its way to winning the conference. The Heat haven’t been as impressive during the regular season, but this team has virtually all of last year’s roster that beat the Bucks. 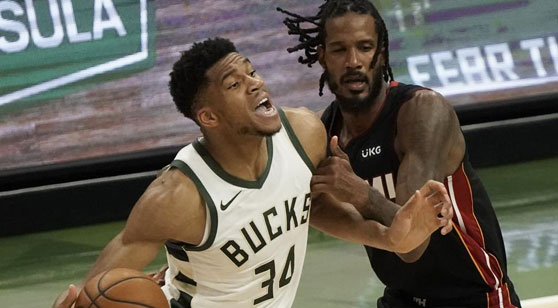 Giannis Antetokounmpo and the Bucks look to avenge last season's playoff loss to the Heat. (AP)

Milwaukee concluded the regular season with a 46-26 record. The Bucks finished three games behind Philadelphia and two games behind Brooklyn to grab the No. 3 seed in the Eastern Conference. They were one of the best teams in the league this season, but they had some more hiccups than they did in the past couple years. This team lost at least three straight games three different times this season.

We saw the Bucks turn it on down the stretch to win eight of their last ten games. Milwaukee was trying to run down the other two teams in the East and beat Brooklyn twice in early May with Giannis Antetokounmpo exploding for 85 points in those two wins.

The Bucks were unable to close the gap, so they sat all their starters in the season finale against Chicago. Milwaukee’s bench players saw a lot of action with rookie Jordan Nwora exploding for 34 points on 14 of 23 shooting and 14 rebounds.

Miami flirted with the playoff bubble for most of the season. The defending Eastern Conference champions were even with the Boston Celtics for the No. 6 seed down the stretch until the Heat won eight of their final ten games to pull away from the Celtics. They knocked off the Celtics twice in Boston over the span of three days to lock down a spot in the postseason without a need for the Play-In Tournament.

As with the Bucks, the Heat sat most of their best players in their season finale against the Pistons. First-round pick Precious Achiuwa and 2019 first-round pick Tyler Herro played big minutes as the young guys on the team, but all the veterans were DNP.

We saw what the Heat are capable of in their two previous games though. They took on Philadelphia and Milwaukee in the final few days of the regular season. The Heat beat the Sixers by 12 points, but they lost to the Bucks as Jimmy Butler sat out the game with lower back tightness. Kendrick Nunn lit up Milwaukee though, and Miami hit 44.9% from beyond the arc.

The only two previous meetings between these teams this season happened on back-to-back nights in late December. Milwaukee dismantled Miami by 47 points on December 29, but the Heat topped the Bucks by 11 points the following night.

Butler missed 20 games for the Heat this season. That hurt Miami as the Heat went 7-13 without their superstar and 33-19 when he was on the court.

Butler rose to the occasion last postseason, and he had a solid regular season with 21.5 PPG, 6.9 RPG, and 7.1 APG. The only flaw in his game was his dismal three-point shooting, as he shot just 24.5% from beyond the arc and had a 10-game stretch where he didn’t make a three from mid-April to early May.

We saw Butler sink all four of his threes against Philadelphia in his last game of the regular season though, and if he has found his touch, that’s not good news for Milwaukee.

Bam Adebayo is someone to fear in the low post. Adebayo is averaging 18.7 PPG, 9.0 RPG, and 5.4 APG this season for the Heat. He is making 57% of his field goals and can shut down opposing forwards in the paint, giving Miami a real chance in this series.

The Heat will need their three-point shooters to come alive too. Duncan Robinson is the only player hitting more than 40% of his threes, as Herro and Goran Dragic haven’t been great beyond the arc. Nunn might be the X-Factor given his hot hand beyond the arc and at the free throw line lately.

The talking heads are starting to question Antetokounmpo in the same manner they questioned LeBron James for nearly a decade.

Antetokounmpo has been the most talented player in the league for the past few seasons, but he has never made it further than the Eastern Conference Finals. The two-time MVP only scored more than 21 points once in last year’s loss to Miami in the playoffs, so he will want to make amends.

Khris Middleton has been extremely underrated over the last couple years. Middleton is one of the best players in the Eastern Conference, but he doesn’t get nearly the credit he deserves in Antetokounmpo’s shadow.

Milwaukee decided it was going to shake things up by dealing Eric Bledsoe and a lot of draft capital to New Orleans for Jrue Holiday a month before the start of the season.

Holiday has been an upgrade from Bledsoe, but he will have to come through in the postseason for the trade to pay off. He is knocking down 50.3% of his field goals and 39.2% of his threes, and Holiday leads the team with 6.1 APG. His play has helped make the Bucks the top scoring offense in the league.

Miami will give Milwaukee a run for its money, but Antetokounmpo will be too much for the Heat in Game 1.