Western Conference postseason action will resume on Sunday night with the Jazz set to host the Grizzlies during the final matchup on TNT’s nationally televised slate. So, VI is getting you ready with a variety of betting resources to help handicap all the evening’s top contests.

Utah enters Sunday’s contest as a nine-point favorite over the visiting Grizzlies – marking the third time Ja Morant and company have been listed as an underdog across their last three games.

The total for this event currently sits at OU 216, which is the lowest over-under set for a Grizzlies’ game since they squared off with Cleveland in their 10th matchup of the season (U 207). 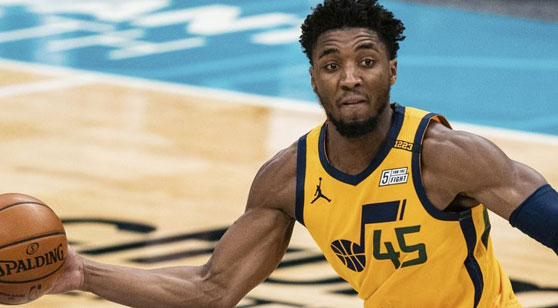 Donovan Mitchell is expected to return to the Jazz lineup on Sunday when they start their series with Memphis. (AP)

The Grizzlies had their sights set on the eighth seed in the conference down the homestretch of the regular season – finishing up with wins in five of their last six games, which almost allowed Memphis to swoop in and steal Golden State’s first-round play-in opportunity against the Lakers.

Instead, Memphis needed a pair of wins over the Warriors and Spurs to secure the final spot in the Western Conference playoff bracket, and ended up pulling it off behind two spectacular defensive efforts – as the Grizzlies held their opponents to an average of 97.5 points per game across two play-in tournament victories.

On the flip side, Utah wrapped up the regular season with Donovan Mitchell on the sidelines due to an ankle sprain.

That didn’t stop the Jazz from battling down to the wire against Phoenix for the top seed in the conference though, as Utah closed out its campaign on a 5-2 run – topping the Suns by one game, which has forced Devin Booker and company into a first-round matchup against the Lakers.

The Jazz swept their regular-season series against Memphis this year – with all three of those victories easily cruising 'over' the total set for Sunday’s tilt at an average of 228.7 points per game.

Utah’s original pair of wins came during a March back-to-back set, and were both propelled by 35-point performances from Mitchell – as Utah pulled off a gutsy one-possession victory in the first of those contests, and claimed the other in a double-digit blowout.

In the latest meeting between these teams though, Utah was forced to play without Mitchell. So, I am tossing it out of the equation while evaluating this matchup for the most part – but it is hard to ignore the fact that the Grizzlies still couldn’t knock off Utah without its primary scoring threat.

After falling to the Warriors in the final matchup of the regular season and finishing ninth in the conference, the Grizzlies had the last laugh during Friday’s play-in tournament finale – as Memphis proved that its prior success was no fluke by eliminating the Warriors with an overtime win behind an extremely timely scoring explosion from Morant (35 points, 14-of-29 FG).

Betting the total in Grizzlies’ games was a rollercoaster ride from start-to-finish this season – with the total finishing up deadlocked 37-37 in matchups containing Memphis.

There has been some newfound consistency in scoring volume across the Grizzlies’ latest stretch of contests though – considering the total has stayed 'under' in seven of their last nine games, with Memphis posting a lowly average of 101.5 points per game across the two ‘over’ results during that timeframe.

After sitting atop the Western Conference standings since early February, Mitchell suffered an ankle injury that left him on the sidelines for the last month or so – which put the regular-season crown up for grabs with only a handful of contests left on the schedule.

Utah pulled through with a record of 10-6 during the superstar’s absence though, which ended up being enough to beat out the Suns for first place by one game – setting Phoenix up for a first-round series against the defending champs.

The Jazz leaned towards the low-scoring side of the spectrum during this year’s regular-season – considering the total finished at a 33-38-1 (53.5%) clip in matchups containing Utah, which ranked eighth across the league in that department.

Utah’s low-scoring pattern seemed to be gaining momentum down the homestretch of the regular season too – with the Jazz heading into the postseason following three straight ‘under’ results.

Dillon Brooks was relatively quiet during his most recent outing against Golden State on Friday – scoring just 14 points across 45 minutes of action in what was the most important game of the Grizzlies’ season thus far.

Brooks didn’t need to make much noise in that contest though – as Morant racked up 31 of his team’s 99 points during regulation, which left a slight dip in his scoring numbers.

I’ll back Brooks to get back on track offensively here, as I doubt Ja will continue to shoulder the scoring load that he brought upon himself against Golden State.

If it weren’t for the high-scoring overtime stanza in Memphis’ latest play-in victory over Golden State, the Grizzlies would be heading into Sunday’s series opener following back-to-back postseason matchups that contained less than 200 points scored in them.

On the other hand, the total consistently leaned towards the 'under' in matchups containing Utah this season – as Jazz ended up closing out their campaign with ‘under’ results in 11-of-18 games, which includes three straight as they approach Sunday’s matchup.

I’ll ride with the ‘under’ here too – as I think Memphis will continue to ramp up the intensity at the defensive end of the floor in an attempt to knock off the top-seeded Jazz in this series.