It’s been an incredible season for the Washington Wizards. This team was left for dead after dealing John Wall to Houston for Russell Westbrook in the offseason, but Westbrook and Bradley Beal willed the team back to the playoffs.

The Wizards grabbed the No. 8 seed on Thursday night, and their reward is a first round date with the Philadelphia 76ers. The Sixers edged out the Brooklyn Nets for the No. 1 seed in the Eastern Conference. 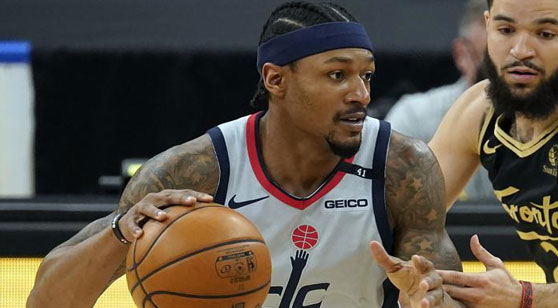 Bradley Beal and the Wizards travel to Philadelphia to take on the top-seeded 76ers on Sunday. (AP)

Philadelphia was one of the best teams in the NBA throughout the season. The Sixers were 24-12 at the All-Star Break, and they went 25-11 in the second half of the season.

A four-game losing streak in late April seemed to derail Philly’s hopes for the No. 1 seed. The 76ers lost consecutive games to Milwaukee at the tail end of that stretch, but they managed to win 10 out of their last 12 games to claim the top spot entering the playoffs.

Washington's schedule during that time was extremely manageable as Philadelphia only played two playoff teams (Atlanta and Miami).

Washington won 15 of its last 20 games to close out the regular season. The Wizards seemingly emerged out of nowhere as Westbrook and Beal were unstoppable for long stretches. Four of their five losses during this impressive run came on the road against playoff teams (Dallas, Milwaukee, and Atlanta twice).

The Wizards had two opportunities to get into the playoffs since they finished in eighth place. Their first crack was at Boston, and they had a two-point lead at halftime. Unfortunately, Jayson Tatum dominated them in the low post and ended the game with 50 points, most of which came in the second half.

They had a lot more luck against Indiana on Thursday night. Washington had little trouble with Indiana, as the Wizards beat the Pacers 142-115. Westbrook had 18 points and 15 assists, and Beal had 25 points. Ish Smith and Daniel Gafford were effective off the bench in the win too.

The Sixers beat the Wizards in all three of their meetings during the regular season. Philadelphia held off Washington 113-107 in both teams’ season opener just before Christmas, and the Sixers won a shootout 141-136 in early January.

Their third and final meeting came right after the All-Star Break when Philly hammered Washington by 26 points on the road.

Everything runs through either Beal or Westbrook on offense. Beal led the Eastern Conference in scoring and nearly surpassed Golden State's Stephen Curry for the overall scoring title at the end of the year.

Beal averaged 31.3 PPG this season, hitting 48.5% of his field goals and 34.9% of his threes. The former University of Florida standout was able to get to the line a lot too, averaging 7.7 FTA.

Westbrook recently set the all-time NBA record for career triple-doubles. Although some analysts have thrown cold water on the accomplishment, it’s still an impressive stat and points to Westbrook’s impact on every game.

The All-Star guard averaged 22.2 PPG, 11.5 RPG, and 11.7 APG during the regular season. Westbrook isn’t the most effective shooter (especially from beyond the arc), but he has made the Wizards a lot more competitive since his arrival.

The problem for Washington lies in where the rest of their points are coming from on Sunday afternoon. Gafford, Rui Hachimura,, and Davis Bertans are the other players averaging double digits in scoring, but they don’t exactly inspire fear in opponents.

Hachimura has not been an efficient shooter given his size, but Bertans and Gafford have done a somewhat decent job.

Joel Embiid is likely to finish second in the NBA MVP voting to Denver's Nikola Jokic. Embiid has had a great season and was the frontrunner for a while, but he missed 21 games while Jokic was on the court for all 72 games.

There wasn’t a more dominant player in the Eastern Conference when he was on the floor. Embiid led Philly with 28.5 PPG and 10.6 RPG, making 51.3% of his field goals and 37.7% of his threes.

Embiid's inside-outside game makes him a matchup nightmare, and Washington doesn’t have anyone that can slow him down if he gets going.

Tobias Harris was the Sixers’ second leading scorer this season. Harris averaged 19.5 PPG and 6.8 RPG, and he largely posted nice numbers under the radar. He made 51.2% of his field goals and 39.4% of his threes this season to be the one of the most reliable scorers.

One of the biggest questions for Philadelphia entering the playoffs is the health of Ben Simmons.

Simmons missed multiple games with a non-COVID illness at the end of last month, and he hasn’t looked as explosive since his return. Although Simmons still struggles to find and make good looks in a half-court set, he is easily the second-most talented player on the team.

Simmons averaged 14.3 PPG, 7.2 RPG, and 6.9 APG this year. He was once again a terror in the full court with a head of steam, and he is one of the NBA’s best on-ball perimeter defenders. His dismal three-point shooting continues to be an issue though.

The Sixers will turn to Seth Curry and Danny Green to hit their perimeter shots. Curry made 45% of his threes this season and has proven to be a great offseason pickup. As for Green, he started all 69 games where he saw action and knocked down 40.5% of his treys.

This won’t be pretty. Embiid is going to explode in one of his best performances of the season as the Sixers easily handle the Wizards despite good performances from Westbrook and Beal.