Western Conference postseason action will resume on Tuesday night with Game 2 between the Mavericks and Clippers set to take place during the final matchup on TNT’s nationally televised slate.

Despite winning Saturday’s series opener by a double-digit margin, Dallas heads into Game 2 as a 6.5-point underdog against the fourth-seeded Clippers – marking the 10th straight game Los Angeles has been favored in.

The total for this event currently sits at OU 216, which is indicative of the pace these teams played at during their first postseason meeting – with Dallas taking down the Clippers by a score of 113-103 this past Saturday. 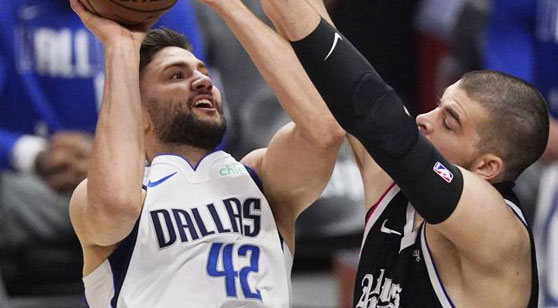 The Mavericks knocked off the Clippers in the series opener as they meet for Game 2 on Tuesday night. (AP)

After riding a rollercoaster of injury concerns for most of the year, the Mavericks got healthy towards the conclusion of the regular season and managed to successfully wrap up their campaign on a high note – as Dallas entered Saturday’s series opener following wins in 9 of 12 games.

On the other hand, the Clippers experienced some unusual shooting struggles down the homestretch of the regular season – resulting in losses in six of their last 10 matchups and a plummet down to fourth place in the conference, which landed them a tough opening-round matchup against Dallas.

Both of those trends continued during the Dallas-L.A. series opener this past Saturday too – as the Clippers shot just 11-of-40 (28%) from beyond the arc on the way to a double-digit loss in Game 1.

Dallas won two of three matchups against the Clippers during the regular season, with all three of those affairs comfortably staying 'under' the total set for Tuesday’s tilt (216) – thanks to the losers in those contests averaging just 87 points per game across that window.

The Mavericks have been extremely triumphant during their victories over L.A. this season – with Dallas claiming its first two wins by an average margin of 33.5 points, and most recently by a 10-point margin in their first opener this past Saturday.

On the flip side, the Clippers lone victory over Dallas also came by a double-digit margin – but honestly, I think L.A. just happened to catch Luka Doncic on a bad night in that matchup, as the Mavericks’ primary scorer posted a desperate 25 points on 23 shot attempts across the 10-point loss.

Times are very different now, but these teams also squared off during the opening round of last year’s playoffs back in the NBA bubble – which resulted in a six-game series victory for the Clippers.

The Mavericks played relatively pedestrian basketball for most of the regular season thanks to a revolving door of injuries and some really poor defensive stretches.

Both of those patterns have dwindled as Dallas rolls into the postseason though – considering J.J. Redick is the only player left on the injury report and the Mavericks have now held six of their last eight opponents to 110 points or less, which includes Saturday’s 113-103 series opener against L.A.

Despite ranking in the top half of the league in points per game this year (112.5), the Mavericks consistently leaned towards the ‘under’ for most of the regular season – considering the total sat at 29-38 (56.7%) in matchups containing Dallas with just five games remaining on the schedule.

Dallas finished up the regular season on a run of five straight ‘over’ results though, which brought that number down to a slightly less alarming clip of 53% before entering this first-round series against Los Angeles.

After getting upset by Denver in the second round of last year’s playoffs, I expected the Clippers to look a little better than they did in their grand return to the postseason this past Saturday – considering Los Angeles scored just 103 points on 44% from the field against a Mavericks team that ranked 27th in the league in defensive rating during the regular season (118.4).

Betting the total in Clippers’ games was a rollercoaster ride from start-to-finish during the regular season – with the total finishing up at a 34-36-2 clip in matchups containing Los Angeles.

There has been some newfound consistency in scoring volume across the L.A.’s latest stretch of contests though – considering the total has gone 'over' just twice across the Clippers’ last 12 games, which includes an ‘over’ result during Saturday’s series opener against Dallas.

Doncic posted a monster triple-double during the Mavericks’ postseason opener against Los Angeles this past Saturday – racking up 31 points, 10 rebounds, and 11 assists on the way to a double-digit victory over the Clippers.

I’ll back Luka to have another big night scoring here, as I expect the Mavericks to keep leaning on their superstar for hefty offensive production throughout this series – and I have to imagine he will share the ball even less this time around if Tuesday’s contest remains competitive.

After finishing fourth in the Western Conference with a record of 47-25 on the year, the Clippers really struggled to get the long-ball going in their postseason opener against Dallas on Saturday afternoon – leading to a double-digit loss in the Staples Center to kick off this first-round series.

I’ll back the Clippers to bounce back here though, as I still have faith Los Angeles will get the offense going at home against a Mavericks’ unit ranked 27th in defensive rating (118.4).