Eastern Conference postseason action will resume on Wednesday night with the Hawks and Knicks set to square off for Game 2 during the first matchup on TNT’s nationally televised slate.

Despite losing the opening matchup of this series by a basket on their home floor, the Knicks head into Wednesday’s contest as a two-point favorite over the visiting Hawks – marking the fifth straight game New York has been favored in.

The total for this event currently hovers around OU 212.5, which is indicative of the scoring volume during Atlanta’s 107-105 victory this past Sunday. 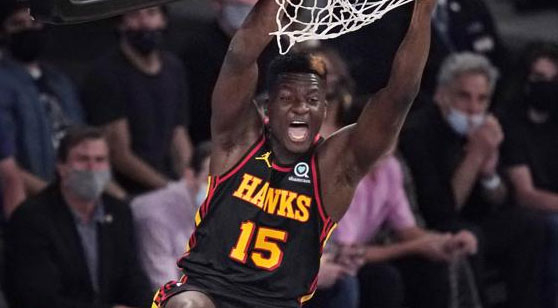 The Hawks look for a 2-0 series lead against the Knicks when they meet on Tuesday night. (AP)

After going on an amazing run throughout April (11-4), New York ran into some tough opponents down the homestretch of the regular season – which caused Julius Randle and the crew to cool off a little bit before heading into the first round of the playoffs against Atlanta.

The Knicks didn’t shoot very well during their postseason opener against the Hawks on Sunday – as New York scored just 105 points on 45% from the floor and 33% from downtown across the two-point loss.

New York didn’t shoot much worse than the Hawks did in the contest though, considering Atlanta finished up at a 47% clip from the field and 35% from beyond the arc during the victory.

Surprisingly, the Hawks’ 11-6 victory in the turnover battle ended up being the determining factor in Sunday’s matchup. So, we’ll see if the Knicks can clean up that department ahead of Game 2 – especially considering the only team in the Eastern Conference that turned the ball over less than New York this season was the Magic.

The Knicks swept a three-game series against Atlanta during the regular season – with all three of those contests comfortably going 'over' the total set for Wednesday’s event at an average of 233 points per game (excluding overtime).

In the first pair of matchups between the Hawks and Knicks this year, New York managed to take care of business in regulation – posting wins by an average margin of eight points in those two contests.

The Hawks gave New York a run for its money in the third matchup though – as Atlanta entered the fourth quarter of the affair boasting a seven-point lead, before getting throttled by 17 across the fourth and overtime stanzas of the contest (137-127, OT).

Atlanta’s regular-season campaign was consistently plagued by injury concerns to key rotational pieces, which resulted in quite the rollercoaster ride throughout the year.

The Hawks finally started to get healthy down the homestretch though, and it showed during their final run of regular-season affairs – as Nate McMillan’s guys went into Sunday’s series opener following wins in seven-of-eight games, with Atlanta’s only loss across that span coming on the second half of a back-to-back against Indiana.

Regarding the total, Atlanta wrapped up the regular season slightly leaning towards the low-scoring side of the bar, which is partly due to the Hawks finishing their campaign on a run of four straight ‘under’ results – taking that clip from 35-33 on the year, down to 35-37 before the playoffs.

That trend might have a chance to build some momentum throughout this series though, considering New York and Atlanta combined for just 212 points and an ‘under’ result during their series opener this past Sunday.

After a back-and-forth race for homecourt advantage, the Knicks and Hawks finished deadlocked at 41-31 for the fourth spot in the Eastern playoff bracket as New York gained an upper-hand in the standings because of the three victories claimed over Atlanta this year.

The Knicks’ rise to relevance was easily the most surprising part about the regular season.

R.J. Barrett and Immanuel Quickley both developed into players that have sufficiently complemented Randle’s emergence as an All-Star. The revival of Derrick Rose’s career has been undeniably fun to watch. And as a team, New York ranked fourth in the league defensively.

I’m still not totally sold on the Knicks being a real threat to any of the contenders in the East though. New York posted a lowly average of 107 points per game at a 45% clip during the regular season – breeding an offensive rating of 110.2, which ranked bottom 10 across the league in that department.

Trae Young kept his spectacular scoring streak alive with a 32-point performance on 11-of-23 shooting during Atlanta’s two-point victory over the Knicks on Sunday night – marking the University of Oklahoma product’s fourth straight outing with 30 or points (26+ minutes).

I’ll back Trae to keep it going here, as Atlanta will probably start leaning on its superstar more and more as this series continues to toughen.

Sunday’s matchup between these teams was a back-and-forth affair that resulted in a narrow victory for Atlanta, as the Hawks managed to seal their first-round series opener in New York behind a game-winning floater from Young – which capped off an event he racked up 32 points, 10 assists, and seven rebounds in.

On the flip side, the Knicks’ All-Star talent seemed to have a case of the playoff-jitters on Sunday evening, as Randle scored just 15 points on 26% from the field during New York’s heartbreaking loss.

I’ll back New York to bounce back here, as the Knicks nearly took care of business against Atlanta on Randle’s 6-of-23 shooting night. If they can rally him back to play a little better this time out, my money’s on them.