For the second straight postseason, the eighth seed in the Western Conference upset the first seed in Game 1 of the opening round.

In 2020, the Trail Blazers knocked off the Lakers in the series opener before losing the next four games.

The Grizzlies will try to avoid that same fate after holding off the Jazz in Sunday's Game 1. 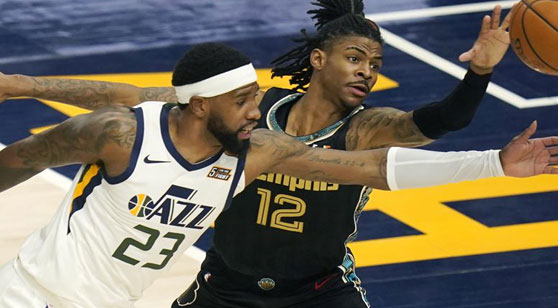 The Grizzlies seek their third straight road win and cover on Tuesday at Utah. (AP)

Memphis has been living on the edge since the end of the regular season as the Grizzlies needed two wins just to make the playoffs.

The Grizzlies passed their first test by eliminating the Spurs in the first portion of the play-in tournament, then Memphis staved off Golden State on the road to pick up the eighth seed in the Western Conference.

The momentum continued for the Grizzlies in Salt Lake City on Sunday night as Memphis beat Utah for the first time in four tries this season, 112-109 to cash as eight-point underdogs.

Memphis caught a break prior to the game when it was announced that Jazz All-Star guard Donovan Mitchell would remain sidelined due to an ankle injury.

Mitchell is expected to return to the Utah lineup for Game 2, but the early damage has been done as Grizzlies' guard Dillon Brooks continued a strong stretch of late by scoring a game-high 31 points.

Last season's Rookie of the Year Ja Morant posted 26 points for the Grizzlies, while Utah was carried by Bogdan Bogdanovic with 29 points, although he missed the game-tying three-pointer as time expired.

Both teams held double-digit leads in the opener, as Memphis led by as many as 17 points, while Utah built a 14-point advantage in the first half before squandering it.

The Grizzlies have taken advantage of the underdog role since last March by covering in 11 of the past 13 opportunities when receiving points.

What makes this run even more impressive is that Memphis has won eight times outright, including victories over Philadelphia, Milwaukee, Portland twice, Miami, and Dallas.

The return of Mitchell is an obvious boost to this Jazz team, who went 10-7 SU and 8-9 ATS in the 17 games he missed since suffering an ankle injury on April 16 against Indiana.

The Jazz own a 4-1 record off a home loss this season and Utah has not lost consecutive contests at Vivint Arena in 2020-21.

There is no disputing how well Memphis has played of late, but the Jazz getting Mitchell back in the lineup will only bolster this team.