Eastern Conference postseason action will resume on Saturday night with the Bucks and Nets set to square off in a highly anticipated second-round series opener at 7:30 Eastern time on TNT.

So, VI is getting you ready with a variety of betting resources to help handicap the evening’s top matchup.

Brooklyn enters Game 1 as a four-point favorite over the visiting Bucks – marking the first time Milwaukee has been listed as an underdog since squaring off against the Hornets back on April 9th, which was an event Giannis Antetokounmpo and Khris Middleton both did not participate in (CHA -3).

The total for Saturday’s event is currently stationed at OU 239.5, which is easily the highest bar set for a postseason matchup containing either of these teams. 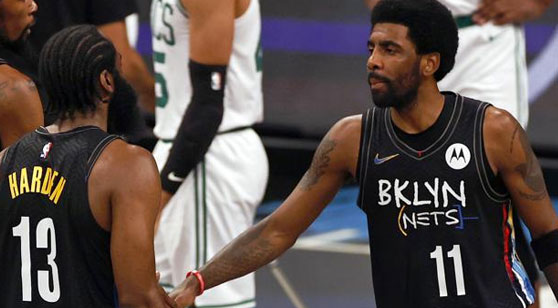 The Nets welcome in the Bucks to begin the much-anticipated second round series on Saturday. (AP)

The Nets endured a revolving door of injury concerns throughout the regular season, which resulted in Brooklyn’s “Big Three” playing in just four games together before the start of this year’s playoffs.

That didn’t seem to matter during their first-round gentleman’s sweep of Boston though, considering the Nets racked up a lofty total of 124 points per game across those five contests – which can mainly be attributed to superstars Kevin Durant, Kyrie Irving, and James Harden knocking down 45% of their 104 long-range attempts on the way to Brooklyn’s short series victory.

On the other hand, the Bucks weren’t quite as “gentlemanly” during their first-round postseason rematch against the Heat – as Middleton abruptly took the wind out of Miami’s sail with an overtime game-winner in the series opener, which turned into Jimmy Butler and company completely flatlining for the remainder of Milwaukee’s dominant four-game sweep.

Milwaukee claimed victories in two-of-three regular-season matchups against the Nets this year – with at least one member of Brooklyn’s “Big Three” being absent in all those affairs.

The first matchup between these teams took place just a few days after Harden was traded to Brooklyn, and The Beard managed to exceed expectations during his first big game in a new uniform – scoring 34 points on 13-of-25 from the floor to seal a two-point victory for the Nets.

The following set of matchups took place without Harden towards the beginning of May though, and resulted in a pair of home wins for Milwaukee – as the Bucks escaped with two victories by an average of four-and-a-half points behind back-to-back monster performances from Antetokounmpo (42.5 PPG, 48% FG).

After finishing with the best record in the Eastern Conference across consecutive regular seasons, the Bucks began their current campaign riding a bumpy stretch of results – with Milwaukee posting a record of 10-8 to start the year, which includes losses in matchups against the Pelicans, Hornets, and Knicks during that span.

Like Brooklyn, the ‘over’ in Bucks’ games was a very profitable wager throughout this year’s regular season – highlighted by the total going over in 57.8% of matchups containing Milwaukee, which ranked second in the conference in that department.

That trend has fizzled out recently though – considering the total has played at a 50%-split across the Bucks’ latest 8-game window, which includes a 2-2 showing in their first-round sweep of Miami.

Before the start of the postseason, there appeared to be very little separation among the top contenders vying to take home this year’s title – with Brooklyn coming in as a moderate favorite at +250 odds, but still a considerable amount of love getting dished out to longshot contenders such as the Lakers (+375), Clippers (+600), Sixers (+750), and Bucks (+950).

Now that the dust has mostly settled from round-one though, the Nets (+175) have emerged as the undisputed favorite to take home this year’s title ahead of this second-round series – considering Los Angeles already stands one loss away from having its second team eliminated from the bracket, and Philadelphia (+1000) quickly plummeted down the totem pole following Joel Embiid’s hobbling meniscus tear.

Regarding the total, the ‘over’ in Nets’ games played at very profitable clip during the regular season – with the total going over in 55.6% of matchups containing Brooklyn, which ranked third across the conference in that department.

That high-scoring trend has regained prevalence along the Nets’ opening stretch of postseason affairs too – considering the total went 'over' in four-of-five games during their first-round series against Boston.

After averaging over 28 points on 57% from the field this season, Antetokounmpo drew a tough defensive matchup in Miami’s Bam Adebayo to open the playoffs – bringing his averages down to 23 points per game on 45% shooting during Milwaukee’s first-round sweep of the Heat.

In his regular-season matchups against Brooklyn though, Giannis averaged 38 points per game on 49% from the floor – highlighted by a 49-point performance on 21-of-36 shooting during Milwaukee’s first victory over the Nets this year.

I’ll back Giannis to have a big game here, as Brooklyn still doesn’t have anyone in the rotation capable of adequately guarding the former-MVP – and I expect Milwaukee to consistently exploit that throughout this series.

After dominating Boston by posting an average of 123 points per game to kick off the postseason, the Nets quickly emerged as the favorites to take home this year’s title at +175 odds – and rightfully so, considering Brooklyn is significantly more talented than any of the remaining playoff teams.

In my opinion, the only teams left that could potentially hinder Brooklyn along its route to a championship are the squads that have an extensive history with its core group of superstars – such as Utah or Milwaukee.

That being said, I still lean with Brooklyn at home in Game 1. The Nets’ superior talent level is just too difficult for me to ignore ahead of Saturday’s highly anticipated series opener.