So, VI is getting you ready with a variety of betting resources to help handicap all the top events.

After knocking off the Knicks in a quick five games, Atlanta heads to Philadelphia for its second-round series opener as a three-point underdog against the top-seeded Sixers – marking the shortest number Philly has been favored by since laying one point in The Big Apple back on March 21st (PHI -1). 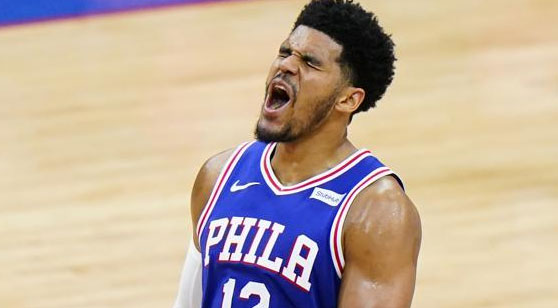 The top-seeded 76ers start their second round playoff series on Sunday as they host the upstart Hawks. (AP)

After claiming the top seed in the Eastern Conference with a record of 49-23, Philadelphia catapulted into the playoffs with three straight wins over Washington by an average of 20.3 points per game to start the first round – highlighted by a pair of 30-point performances at a 68% clip from Joel Embiid in two events.

The first quarter of Game 4 felt like deja-vu for Sixers’ fans though, as Embiid landed awkwardly on his knee after a missed layup with four minutes left in the opening stanza – sidelining him for the remainder of Philly’s opening series, and potentially a chunk of the second-round against Atlanta.

On the other hand, the Hawks kicked off their first-round series against New York with a pair of hard-fought battles at Madison Square Garden – as Trae Young hit a game-winning floater to seal a two-point win in Game 1, and the Knicks bounced back with a convincing nine-point victory in Game 2.

Atlanta had a point to prove in the following three matchups though, considering the Hawks stomped New York by an average of 14 points the rest of the way – which included a dominant series-ending victory at MSG in Game 5 (103-89).

The Sixers won two of three matchups against Atlanta during the regular season – with their first two meetings staying 'under' the total due to the losers in those affairs averaging just 88.5 points per game, and the third cruising over the number as a result of these teams combining for 230 points on the way to a blowout victory for Philadelphia (126-104).

Atlanta’s lone victory over the Sixers came during Philadelphia’s mid-January COVID-19 crisis, as Ben Simmons, Tobias Harris, Seth Curry, Shake Milton, and Matisse Thybulle were all forced to sit out the first matchup between these teams for health and safety reasons – resulting in an 18-point victory for the Hawks.

The Sixers were healthy for their back-to-back set against Atlanta at the end of April though, and things played out much differently for them – as Philadelphia smoked the Hawks by an average of 33 points in a pair of home victories to close out the month.

After finishing up the regular-season deadlocked with the Knicks in the standings at 41-31, the Hawks stumbled out of the gate at MSG to start the playoffs – as Atlanta needed Young to hit a game-winning floater to top the Knicks by a bucket in Game 1, which was followed by a worrisome nine-point loss in Game 2.

The Hawks proved they were clearly the better team in the following trio of matchups though – as Atlanta claimed three straight wins over the Knicks by double-digits to close out the series.

Regarding the total, Atlanta leaned towards the low-scoring side of the spectrum during the regular season – highlighted by the total staying 'under' in roughly 52% of Hawks’ games.

That trend continued to gain steam throughout Atlanta’s first-round series against New York too – considering the total stayed 'under' in all but one of those five games.

With Milwaukee, Miami, Brooklyn, and Boston all being forced to play each other before reaching Philadelphia in the playoff bracket, and the West appearing significantly weaker than it has in years – the Sixers started to look like they had a legitimate shot at sneaking away with a championship after plowing through Washington by an average of 20 points across their first three postseason matchups.

Philadelphia’s championship-odds plummeted to +1200 at some shops following Embiid’s knee injury in Game 4 though – comfortably positioning them below teams like the Clippers (+650), Bucks (+550), and Jazz (+320) in that category, which are all teams on much more difficult paths to the NBA Finals.

Clearly, the Sixers are far worse without Embiid playing at full-strength – as we saw during their last two matchups against Washington. I wouldn’t slam the panic button quite yet on Philadelphia though – at least not ahead of this second-round series with Atlanta.

Even without their superstar, the Sixers have a solid primary scoring threat in Harris that can control the flow of the offense, and a dominant defensive backcourt headed by Simmons – which still appears to be more than Atlanta brings to the table ahead of this second-round matchup.

Now that Embiid is hobbled due to a minor meniscus tear in his knee, Philadelphia will be forced to lean on various members of its supporting cast for offensive production until the MVP-finalist returns to full-strength – likely leaving a hefty number of shots for Harris to take at the offensive end.

I’ll back Tobias to have a solid night on the scoreboard here, as somebody else needs to step up and be Philadelphia’s primary scoring option in this series – and I think Harris will be that guy.

After claiming the top seed in the Eastern Conference with a record of 49-23, the Sixers head into Sunday’s series opener favored by less than a possession over Atlanta – which somewhat seems to indicate Philadelphia was single-handedly carried by a healthy Embiid through the regular-season.

I’ll lay the points with Philadelphia at home here though – as this year’s squad seems to possess significantly more talent up-and-down the line of its supporting cast than the books are currently giving them credit for.